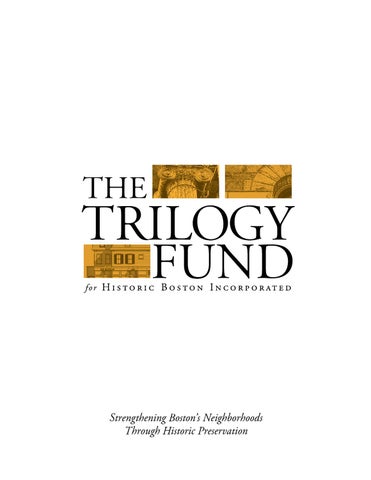 Board of Directors Matthew J. Kiefer

(HBI) is a non-profit preservation and real estate organization that works with local partners to identify and invest in the redevelopment of historically significant buildings and cultural resources to catalyze neighborhood renewal. A thriving organization with a $1.2 million annual budget and a $15 million project portfolio under development in Boston neighborhoods, HBI plays a unique role in Boston’s real estate environment. As a mission-driven redeveloper of historic properties, HBI deploys the tools of real estate development, including property purchases, options, loans and equity investments to advance projects that turn around at-risk historic places. HBI undertakes projects that lie beyond the capacity of private property owners and mainstream developers. Most HBI projects are sold with permanent preservation covenants, recapturing HBI’s initial equity investment for new projects, thus demonstrating that preserving historic properties is economically relevant and functionally viable for urban communities. HBI’s approach to the adaptive re-use of historic buildings is a national model for combining historic preservation with neighborhood investment and community development. By adapting older buildings to meet current needs, HBI enriches communities, improves their economic vitality, and restores neighborhood pride.

Mayor Menino, neighbors and friends gathered for a community photograph at the 1836 Alvah Kittredge House in the summer of 2011.

For over fifty years, Historic Boston Incorporated’s strategic and

transformative investments in some of Boston’s most important historic buildings have stimulated investment by others and helped develop strong and vibrant urban neighborhoods.

The Trilogy Fund for Historic Boston is a one-time, $1 million capital fund, to support the completion of three significant properties: • The 1836 Alvah

HBI is proud to have Mayor Thomas M. Menino, Honorary Chair, with Ronald M. Druker, Chair, of the

• The 1875 Hayden Building in Chinatown

Your gift to the Trilogy Fund supports

There are many ways to support the Trilogy Fund. The inserted card describes the different benefits you will receive for each level of giving. You may also visit www.historicboston.org or contact Kathy Kottaridis at 617-442-1859.

We are asking all avowed city lovers to join with us in supporting Boston neighborhoods by donating to The Trilogy Fund for Historic Boston. Ronald M. Druker Trilogy Fund Chair

The Hayden Building is the only

Background: The fourth floor of the Hayden Building under construction, summer 2012.

Above Left: The Hayden Building as part of Boston’s legendary Combat Zone, in the 1980’s after a fire had destroyed the roof. Above Right: The Hayden Building today under construction for new residential units and retail space. Right: Portrait of architect Henry Hobson Richardson by Sir Hubert von Herkomer, National Portrait Gallery, Washington, D.C.

remaining commercial building in Boston designed by renowned 19th century American architect Henry Hobson Richardson. It was purchased by HBI in 1993 when the building was threatened with condemnation after a fire had devastated the roof and the entire building was structural unstable. HBI invested $1 million at the time in structural stabilization, envelope repairs and activation of the first floor and an adjacent non-historic building for commercial activity. The Hayden Building’s turnaround helped Lower Washington Street’s renewal in the 1990s and 2000s. HBI recently sold its interests in the nextdoor Penang restaurant location and will re-invest in the Hayden Building’s longempty upper stories in order to create housing units and an on-going revenue source for HBI’s preservation activities.

Built for Roxbury alderman and Eliot Church deacon Alvah Kittredge (1798–1876), the Kittredge House is one of a handful of high style Greek Revival period wood frame houses remaining in Boston. Originally positioned in the center of a large rural estate, the Kittredge House was also once home to prominent 19th century Boston architect Nathaniel Bradlee. In the 1970s and 80s, it was headquarters for Roxbury Action Program (RAP), a social service and advocacy organization that organized and delivered programming directed to Roxbury’s African American community. The house has been abandoned since 1991. Below: The Alvah Kittredge House in the Roxbury Highlands, from the 1880s when it was home to renowned Boston architect Nathaniel Bradlee.

ing at 74-84 Fairmount Avenue is likely the oldest and only surviving wooden commercial building in this district. It is a good example of the Second Empire design, popular in the 1860s as HydePark was incorporated as a town and the community and local investors began to build civic and commercial buildings along the River Street and Fairmount Avenue corridors near the two major rail lines that traveled through Hyde Park. Located opposite the Riverside Theaterworks and adjacent to the Faimount Avenue MBTA Commuter station, the Vertullo Building is a highly visible historical anchor to Logan Square. The Vertullo Building has managed to survive largely intact because it has been in the hands of the Vertullo Family and their descendants since 1932. HBI acquired the building in 2011.

Above Right: Rendering of the Vertullo Building’s planned rehabilitation, by b Architecture Studio, 2012. Above Left: The Vertullo Building at 74-84 Fairmount Avenue, in Hyde Park’s Logan Square. Left: Brian Pearce, third generation of Vertullo family members to live here, circa 1965.

Historic Boston Incorporated was founded in 1960 to save the Old Corner Bookstore, the oldest remaining commercial building in downtown Boston (1718) and the hub of 19th century American literature as home to the publishing house of Ticknor and Fields. Threatened with demolition to make way for a parking garage, HBI’s founders proved that these five buildings – now offices and restaurants– could be re-used in a way that also preserved their heritage, while claiming a place for them in the modern world and contributing to the city’s tax rolls.

Above: Old Corner Bookstore in circa 1960 Left: Henry David Thoreau’s seminal work Walden (above) was first published here in 1854 by Ticknor and Fields.

Historic Boston Incorporated is established with the restoration of Old Corner Bookstore.

Right: A community photograph at the Eustis Street Fire House before construction, 2009

Above: A young neighbor celebrates ground breaking on Eustis Street, 2010

The oldest remaining fire house in Boston, this 1859 building in Roxbury’s Dudley Square became Historic Boston’s new headquarters in 2011. The building sat empty and in a precarious state for more than 50 years before HBI secured a 99-year lease from the city and began restoration. Today, the Eustis Street Fire House is a harbinger of change and renewal in this burgeoning business district.

• Basilica of Our Lady of Perpetual Help (Mission Church) 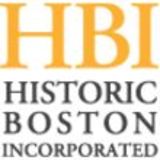