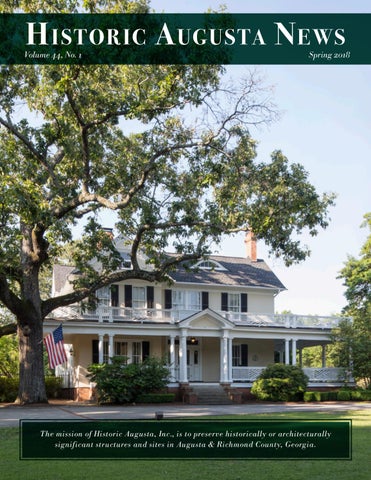 The mission of Historic Augusta, Inc., is to preserve historically or architecturally significant structures and sites in Augusta &amp; Richmond County, Georgia.

HISTORIC AUGUSTA DOWNTOWN LOFT TOUR MAY 4TH + 5TH Historic Augusta’s Downtown Loft Tour is a great opportunity to stroll through our downtown while popping in and out of private loft apartments and other historic buildings. The tour will take place on First Friday, May 4 from 6-9 pm and will continue on Saturday, May 5 from 10am-4pm. Lofts can be toured in any order and tickets are good for both tour days. Admission is $20 in advance and $25 during the tour. Tickets can be purchased during

the tour at tour headquarters, located at The White’s Building, 936 Broad Street, or in advance at www.historicaugusta.org, Metro Coffee House, and at Mellow Mushroom downtown and in Evans. Make sure you also snag one of our awesome t-shirts this year, designed by our friends at Kruhu! RA

Historic Augusta hopes that everyone will make plans to attend this year’s Cotton Ball, which will take place on Thursday, May 17 from 6:30-9:30 pm. The casual, outdoor garden party will be held at the home of Mr. and Mrs. Jim James, 2556 Walton Way. Dinner will be provided by Bonefish Grill, and there will be cash bars along with our famous Mint Juleps. Members will be entertained by Monet Robinson with Voxnbass. Admission to the Cotton Ball is by current, new, or renewing membership in Historic Augusta. To join, or to check the state of your membership please give us a call at 706-724-0436. SH

Some of the Locations Featured on This Yearâ&amp;#x20AC;&amp;#x2122;s Loft Tour

WALK WITH THE SPIRITS Saturday and Sunday, October 6-7 In Magnolia and Cedar Grove Cemeteries

May is Preservation Month and along with the National Trust for Historic Preservation, we encourage you to share your stories as we celebrate the places that matter the most. This Place Matters began in 2008 as a way to connect people across communities with the places that are most important to their history and their future. Whether the place is a building, landscape, or region, large or small, nationally significant

or personally priceless, historic or just old - we’re interested in places that played a significant role in your life. Download and print a “This Place Matters” sign from savingplaces.org and take a photo of it next to a place that is significant to you. Be sure to use the hashtags #ThisPlaceMatters and #HistoricAugusta so we can interact with your story. SH

THREE AUGUSTA PROPERTIES PRESENTED WITH STATEWIDE PRESERVATION AWARDS On Friday April 27, 2018, the Georgia Trust for Historic Preservation announced their 41st Annual Preservation Awards at the historic First Presbyterian Church in Columbus, Georgia. Congratulations to all for an outstanding dedication to preserving our historic resources! RA

656 MILLEDGE ROAD The Benjamin Franklin Jones House (656 Milledge Road), a former Endangered Property listed to Historic Augustaâ&amp;#x20AC;&amp;#x2122;s program for 2017, was also awarded an Excellence in Rehabilitation award with the project completed in 2017.

MILLER THEATER The Miller Theater received the Marguerite Williams Award, presented annually to the project that has had the greatest impact on preservation in the state. The theater also received an award in the Excellence in Rehabilitation category. The theater opened its doors in January 2018 after a $23 million rehab by the Augusta Symphony.

With the arrival of spring in the CSRA, the staff at Historic Augusta is looking forward to one of our busiest times of the year. May is National Historic Preservation Month and we are in the midst of planning two major events; the Annual Downtown Loft Tour and the Cotton Ball. The Downtown Loft Tour, now in its 14th year, is a way to showcase both the buildings in our downtown historic district that have been rehabilitated for both commercial and retail space and feature income producing residential units on the upper floors. Popularity of downtown living with young

professionals, medical students, and those involved in the cyber industry is expected to be in high demand. Historic Augusta encourages all downtown property owners to know that we are a resource to help you with your buildings, understanding certified rehabilitation tax credits, and the local historic district guidelines; we can also help with applications for certificates of appropriateness for exterior alterations, demolitions, and additions which are applied for through the city’s Planning and Development department.

Spring is a popular time of year for cleaning and repair work. Weatherization and reduction of utility costs is a constant concern for many owners of historic and older buildings. In 2014, Historic Augusta installed interior storm windows that have led to a significant reduction in not only street noise but also the ubiquitous “window drafts” and there is a direct correlation with the reduction of our monthly utility bills. We welcome you to stop by our office to see these seamless acrylic inserts, and we are sure they will be an option to preserve your character defining historic windows instead of purchasing new replacement windows.

Trinity CME Church is being prepared for relocation to an adjacent vacant lot following the successful mediation between Atlanta Gas Light and the Augusta-Richmond County Historic Preservation Commission in early 2018. The mother church of the CME denomination has had non-historic additions removed including the front cement entry steps. The anticipated relocation date of the church is June 2018. The Augusta Canal Authority will hold the property and will continue to work with other local stakeholders, including Historic Augusta, to ensure the long term use and preservation of this highly significant Augusta landmark.

Historic Augusta continues to monitor Old First Baptist Church, 802 Greene Street, and offer assistance to the new property owner in his efforts to continue with building repairs and stabilization. Listed to Historic Augustaâ&amp;#x20AC;&amp;#x2122;s Endangered Properties List for 2016, we understand that the current owner is working to identify an end user for the church which was constructed in 1902 in the BeauxArts style by architect Willis Franklin Denny of Atlanta.

The former rectory of the Church of the Atonement, located at 1018 Telfair Street, was demolished in early 2018. The building was constructed circa 1851 as the Rectory for the Church of the Atonement, an Episcopal parish located on the adjacent lot to the west. William H. Harison was the first Rector. It was an excellent example of the Carpenter Gothic style. The church was razed in 1976, and may have been designed by noted American architect, Richard Upjohn of New York. The rectory was located outside of the Augusta Downtown Local Historic District which would have provided protection from demolition through the local preservation ordinance, requiring the property owner to perform due diligence and provide other alternatives and uses for the building.

Representatives of the Augusta Jewish Museum recently made a presentation to Augusta-Richmond County Commissioners updating the status of fundraising, operational planning, and building rehabilitation for the former Congregation Children of Israel synagogue and Court of Ordinary building located at 525 Telfair Street. A capital campaign is underway and local architecture firm Studio 3 Design Group is working with the Board of the Augusta Jewish Museum to finalize the building plans and project budget. RA

Augusta PICK UP A COPY TODAY 11”x11”. 244 pages. Full color. Indexed Augusta may be purchased for $50 (plus $4 sales tax) at Historic Augusta’s office, located at 415 Seventh Street, or online at www. historicaugusta.org. Books are also available Shoes at Surrey.

AUGUSTA the book everyone is talking about

The release of Historic Augusta’s highly anticipated new book, Augusta, was celebrated in March with three widely attended events honoring the book’s principle donors, owners of homes featured in the book, and Historic Augusta’s members. The book, which offers a fascinating account of the city’s history as seen through its architecture from the eighteenth to the twentieth centuries, was immediately popular with residents and visitors alike. We are grateful to our event hosts, Jacquelyn Murray Blanchard, Albert F. Cheatham, Liz and Bill Hopkins, and Paula and Larry Knox, as well as the authors, Jim Garvey and Lee Ann Caldwell, who graciously signed copies of Augusta to the long lines of eager recipients.

Guided tours are offered every Thursday-Saturday on the hour between 10:00-4:00 pm. Tickets are $5 adults, $4 seniors, $3 students (K-12), and free for children age 5 and under. A great destination to visit with your guests, children, or grandchildren!

HISTORY DAY WITH YOUTH LEADERSHIP AUGUSTA On Friday, March 9, Historic Augusta’s Preservation Services Director, Robyn Anderson, hosted History Day for Youth Leadership Augusta’s Class of 2018. Throughout the day, these bright high school students learned how historic preservation is both important and economically sustainable through a guided tour of Greene and Telfair Streets, a discussion on rehabilitation projects currently ongoing in Augusta, and a group project using primary resources to study buildings in Augusta listed on the National Register of Historic Places. Students then visited Historic Augusta’s headquarters at the Joseph R. Lamar Boyhood Home to eat lunch, watch Historic Augusta’s award-winning documentary “A Boy Never Gets Over His Boyhood”, and view the new Woodrow Wilson exhibit. Lastly, the class was led on a guided tour of the Wilson House by docents Stephanie Herzberg, Ed Holmes, and Walter Cox. SH

SPRING CLEANING IN THE MUSEUM GARDENS Spade and Trowel Garden Club of Augusta and Camellia Garden Club both stopped by in March for some much-needed spring cleaning in the Wilson House gardens. The ladies worked diligently to pull weeds, clear debri, and plant new additions.

NEW TREE PLANTED We are grateful to Trees for Augusta for planting a beautiful holly tree in the museum parking lot.

INTERN SPOTLIGHT The staff of Historic Augusta has enjoyed working with Shaun Rose in his role as intern this spring. Shaun is a rising senior at Augusta University pursuing a B.A. in History and Anthropology, who was recently inducted into the Phi Alpha Theta National History Honor Society. Shaun was introduced to Historic Augustaâ&amp;#x20AC;&amp;#x2122;s work in the community when he attended the Dr. Edward J. Cashin Memorial Lecture on the Freedmanâ&amp;#x20AC;&amp;#x2122;s Bureau, presented in 2016 by Dr. Paul Cimbala, and he has since proved himself invaluable as a research assistant for our upcoming Walk with the Spirits tour of Magnolia and Cedar Grove cemeteries. We wish him every success, as he applies for graduate programs next year in public history and museum studies. SH

WOODROW WILSON: THE EXHIBIT Admired by visitors on Presidents Day

Another long-term project that came to fruition this spring was the installation of a new exhibit at the Joseph R. Lamar Boyhood Home, which serves as Historic Augusta’s headquarters and the visitors center for the Boyhood Home of President Woodrow Wilson. The exhibit, known simply as Woodrow Wilson, compliments the guided tour of the home by exploring Wilson’s later life and presidency. Historic Augusta’s members were treated to a first look at the exhibit with a reception on Sunday, February 18, thanks to the generosity of the Center for the Study of Georgia History. On Monday, February 19, Historic Augusta observed President’s Day by opening the exhibit to the public and offering special Buy-One, Get-One Free tours of the home. SH

THANK YOU TO OUR 2018 PARTNERS IN PRESERVATION

“Gray-Dyess House” on the corner of Walton Way and Arsenal was built in 1899 by Mrs. Annie L. Gray, widow of Edward Hodson Gray and the niece of Prosper Berckmans of Fruitland Manor. The Colonial Revival house is featured in Historic Augusta’s new book, Augusta, and it is also the site of this year’s Cotton Ball on May 17th. 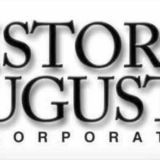