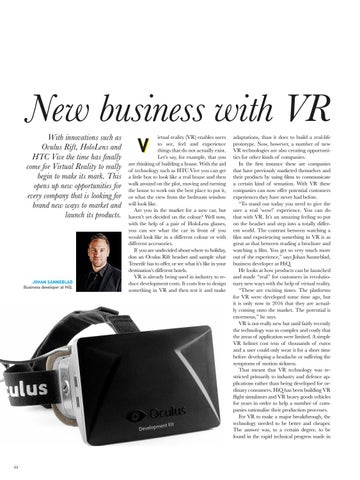 New business with VR With innovations such as Oculus Rift, HoloLens and HTC Vive the time has finally come for Virtual Reality to really begin to make its mark. This opens up new opportunities for every company that is looking for brand new ways to market and launch its products.

irtual reality (VR) enables users to see, feel and experience things that do not actually exist. Let’s say, for example, that you are thinking of building a house. With the aid of technology such as HTC Vive you can get a little box to look like a real house and then walk around on the plot, moving and turning the house to work out the best place to put it, or what the view from the bedroom window will look like. Are you in the market for a new car, but haven’t yet decided on the colour? Well now, with the help of a pair of HoloLens glasses, you can see what the car in front of you would look like in a different colour or with different accessories. If you are undecided about where to holiday, don an Oculus Rift headset and sample what Tenerife has to offer, or see what it’s like in your destination’s different hotels. VR is already being used in industry to reduce development costs. It costs less to design something in VR and then test it and make

adaptations, than it does to build a real-life prototype. Now, however, a number of new VR technologies are also creating opportunities for other kinds of companies. In the first instance these are companies that have previously marketed themselves and their products by using films to communicate a certain kind of sensation. With VR these companies can now offer potential customers experiences they have never had before. “To stand out today you need to give the user a real ‘wow!’ experience. You can do that with VR. It’s an amazing feeling to put on the headset and step into a totally different world. The contrast between watching a film and experiencing something in VR is as great as that between reading a brochure and watching a film. You get so very much more out of the experience,” says Johan Sanneblad, business developer at HiQ. He looks at how products can be launched and made “real” for customers in revolutionary new ways with the help of virtual reality. “These are exciting times. The platforms for VR were developed some time ago, but it is only now in 2016 that they are actually coming onto the market. The potential is enormous,” he says. VR is not really new but until fairly recently the technology was so complex and costly that the areas of application were limited. A simple VR helmet cost tens of thousands of euros and a user could only wear it for a short time before developing a headache or suffering the symptoms of motion sickness. That meant that VR technology was restricted primarily to industry and defence applications rather than being developed for ordinary consumers. HiQ has been building VR flight simulators and VR heavy goods vehicles for years in order to help a number of companies rationalise their production processes. For VR to make a major breakthrough, the technology needed to be better and cheaper. The answer was, to a certain degree, to be found in the rapid technical progress made in

In HiQ Magazine we focus on the wealth of opportunities created by digitalisation and discuss simplicity with people who want to make a difference. 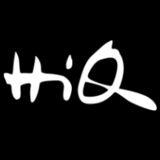