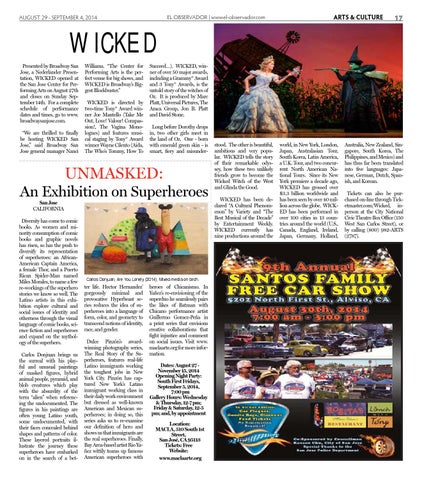 Williams. “The Center for Performing Arts is the perfect venue for big shows, and WICKED is Broadway’s Biggest Blockbuster.” WICKED is directed by two-time Tony® Award winner Joe Mantello (Take Me Out, Love! Valour! Compassion!, The Vagina Monologues) and features musical staging by Tony® Award winner Wayne Cilento (Aida, The Who’s Tommy, How To

Succeed…). WICKED, winner of over 50 major awards, including a Grammy® Award and 3 Tony® Awards, is the untold story of the witches of Oz.  It is produced by Marc Platt, Universal Pictures, The Araca Group, Jon B. Platt and David Stone. Long before Dorothy drops in, two other girls meet in the land of Oz.  One - born with emerald green skin - is smart, fiery and misunder-

WICKED has been declared “A Cultural Phenomenon” by Variety and “The Best Musical of the Decade” by Entertainment Weekly. WICKED currently has nine productions around the

San Jose CALIFORNIA Diversity has come to comic books. As women and minority consumption of comic books and graphic novels has risen, so has the push to diversify its representation of superheroes: an AfricanAmerican Captain America, a female Thor, and a Puerto Rican Spider-Man named Miles Morales, to name a few re-workings of the superhero stories we know so well. The Latino artists in this exhibition explore cultural and social issues of identity and otherness through the visual language of comic books, science fiction and superheroes and expand on the mythology of the superhero. Carlos Donjuan brings us the surreal with his playful and unusual paintings of masked figures, hybrid animal people, pyramid, and blob creatures which play with the absurdity of the term “alien” when referencing the undocumented. The figures in his paintings are often young Latino youth, some undocumented, with their faces concealed behind shapes and patterns of color. These layered portraits illustrate the journey these superheroes have embarked on in the search of a bet-

stood. The other is beautiful, ambitious and very popular.  WICKED tells the story of their remarkable odyssey, how these two unlikely friends grow to become the Wicked Witch of the West and Glinda the Good.

Carlos Donjuan, Are You Lonely (2014). Mixed-media on birch.

ter life. Hector Hernandez’ gorgeously minimal and provocative Hyperbeast series reduces the idea of superheroes into a language of form, color, and geometry to transcend notions of identity, race, and gender. Dulce Pinzón’s awardwinning photography series, The Real Story of the Superheroes, features real-life Latino immigrants working the toughest jobs in New York City. Pinzón has captured New York’s Latino immigrant working class in their daily work environment but dressed as well-known American and Mexican superheroes; in doing so, this series asks us to re-examine our definition of hero and shows us that immigrants are the real superheroes. Finally, Bay Area-based artist Rio Yañez wittily teams up famous American superheroes with

heroes of Chicanismo. In Yañez’s re-envisioning of the superduo he seamlessly pairs the likes of Batman with Chicano performance artist Guillermo Gomez-Peña in a print series that envisions creative collaborations that fight injustice and comment on social issues. Visit www. maclaarte.org for more information.

world, in New York, London, Japan, Australasian Tour, South Korea, Latin America, a U.K. Tour, and two concurrent North American National Tours. Since its New York premiere a decade ago, WICKED has grossed over $3.3 billion worldwide and has been seen by over 40 million across the globe.  WICKED has been performed in over 100 cities in 13 countries around the world (U.S., Canada, England, Ireland, Japan, Germany, Holland, 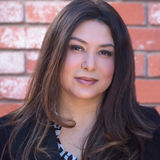