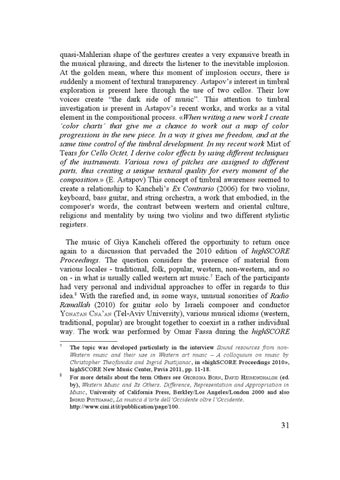 quasi-Mahlerian shape of the gestures creates a very expansive breath in the musical phrasing, and directs the listener to the inevitable implosion. At the golden mean, where this moment of implosion occurs, there is suddenly a moment of textural transparency. Astapov’s interest in timbral exploration is present here through the use of two cellos. Their low voices create “the dark side of music”. This attention to timbral investigation is present in Astapov’s recent works, and works as a vital element in the compositional process. «When writing a new work I create ‘color charts’ that give me a chance to work out a map of color progressions in the new piece. In a way it gives me freedom, and at the same time control of the timbral development. In my recent work Mist of Tears for Cello Octet, I derive color effects by using different techniques of the instruments. Various rows of pitches are assigned to different parts, thus creating a unique textural quality for every moment of the composition.» (E. Astapov) This concept of timbral awareness seemed to create a relationship to Kancheli’s Ex Contrario (2006) for two violins, keyboard, bass guitar, and string orchestra, a work that embodied, in the composer's words, the contrast between western and oriental culture, religions and mentality by using two violins and two different stylistic registers. The music of Giya Kancheli offered the opportunity to return once again to a discussion that pervaded the 2010 edition of highSCORE Proceedings. The question considers the presence of material from various locales - traditional, folk, popular, western, non-western, and so on - in what is usually called western art music. 7 Each of the participants had very personal and individual approaches to offer in regards to this idea.8 With the rarefied and, in some ways, unusual sonorities of Radio Ramallah (2010) for guitar solo by Israeli composer and conductor YONATAN CNA’AN (Tel-Aviv University), various musical idioms (western, traditional, popular) are brought together to coexist in a rather individual way. The work was performed by Omar Fassa during the highSCORE 7

The topic was developed particularly in the interview Sound resources from nonWestern music and their use in Western art music – A colloquium on music by Christopher Theofanidis and Ingrid Pustijanac, in «highSCORE Proceedings 2010», highSCORE New Music Center, Pavia 2011, pp. 11-18. For more details about the term Others see GEORGINA BORN, DAVID HESMONDHALGH (ed. by), Western Music and Its Others. Difference, Representation and Appropriation in Music, University of California Press, Berkley/Los Angeles/London 2000 and also INGRID PUSTIJANAC, La musica d’arte dell’Occidente oltre l’Occidente. http://www.cini.it/it/pubblication/page/100. The highSCORE Proceedings consist of a collection of comments made by the participants of the Festival, interviews with the protagonists, an...

The highSCORE Proceedings consist of a collection of comments made by the participants of the Festival, interviews with the protagonists, an...