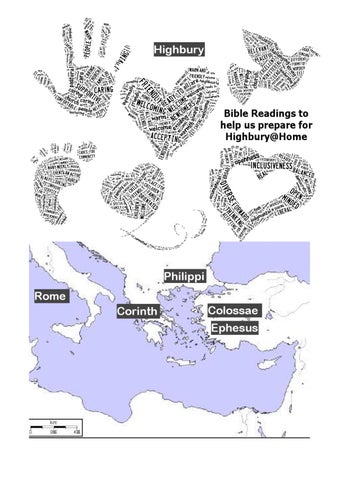 Bible Readings to help us prepare for Highbury@Home

Dreaming Dreams - Sharing Visions Over the last six months we have identified six things that make Highbury special: we seek to be a welcoming church, committed to pastoral care where all we do is underpinned by worship and prayer. With an active concern for the community, mission is at the heart of church life. We seek to be a child-friendly church, that is inclusive and diverse: a church where all are welcome. If that’s the picture we had of our church at Highbury as we gathered together in our Church Meeting in January, what do we measure it by? At Highbury @ Home, our weekend at the end of September, we are going to take a look at five churches that we know quite a lot about from the New Testament, the churches in Rome, Corinth, Ephesus, Philippi and Colossae. What was special about each of those churches? As we build up a picture of what those churches were like maybe we shall find things that challenge us to think again about our own church here at Highbury. The hope is that we can come up with more words that focus on the things we need to do to build up the church here at Highbury, so that we can be true to the calling God gives us as a church. That will then help us to identify the things we need to focus on to build up the church for the future. In among all the words we share, how important it is that we listen out for God’s Word for us. That then gives rise to one more challenge. We are called to be not so much ‘hearers of the word’ but ‘doers of the word’. Let’s seek God’s blessing as we seek to put our words into action! Let’s come to our weekend with an expectation that God’s Spirit will be with us guiding us as we shape the future of our church together. In the couple of weeks before the weekend let’s prepare with Bible readings and prayer. As you read, imagine what it would have been like to have been part of the church meeting in each of these cities. What made each church special?

The Church in Rome

The centre-point of the Roman Empire, Rome was a massive city with monumental buildings, high-rise dwellings and narrow streets. Only a few years before Paul writes Jews had been thrown out of the city. As Paul dictates (16:22) his letter from Corinth he plans to visit Rome on his way to Spain after taking a collection he has been making for the famine stricken churches of Judea. His plans were thwarted when he was arrested. He ended up in Rome under arrest (see Acts 28:11ff). Even if you cannot read through Romans, scan through the headings. Many of the very mixed church are named in chap 16.

Sunday 16th: Read Romans 1:1-17. What does that tell you about the church and what made its people tick? Try praying some of these words. Monday 17th: Read Romans 12. What is Paul’s vision for this church? As you read these and other parts of Romans think about the over-all ethos of the church as Paul wrote, and of the over-all vision for the church that Paul shared. Are there words or phrases that come to mind that sum up what’s special about this church and Paul’s vision for it?

Tuesday and Wednesday The Church in Corinth 18th and 19th

The Church in Corinth

A major city, that was a regional seat of Government in the Roman empire, Corinth stood at the start of the narrow isthmus linking the Aegean Sea with the Adriatic Sea and was therefore a major trading and commercial centre. Its cosmopolitan nature made it a hotbed of all sorts of ideas and moralities. Paul’s time in Corinth is described in Acts 18:1-17. At least two of his letters are preserved in the New Testament: some think the second letter is a combination of two of Paul’s letters. The church has all sorts of problems and divisions prompting Paul to challenge them to think about what is at the heart of being church. If you have time read the letters, or skim through the headings. Tuesday 18th: Read 1 Corinthians 1:1-17. In spite of its problems Paul finds much to give thanks to God for in this church. What is it that Paul is so thankful for? In the face of those divisions what does he want the church to return to? Pray some of these words for our church today and tomorrow. Wednesday 19th: Read 1 Corinthians 12 and 13 What is Paul’s vision for this church? As you read about the church in Corinth are there any words or phrases that come to mind that sum up what is, or at least should be, at the heart of the church’s life?

Thursday and Friday 20th and 21st The Church in Ephesus

The Church in Ephesus

Ephesus is another major city of the Roman Empire, the most important city in the Province of Asia. Home to one of the seven wonders of the world, a temple to Diana, its theatre looked out over a bustling city port with many temples. Paul uses Ephesus as his base for a prolonged period, first meeting in the Synagogue, and then in the Hall of Tyrannurs. His bruising encounter with the manufacturers of miniature copies of Diana of the Ephesians is told in Acts 19 and a later meeting he had with senior members of the church is described in Acts 20:17-38. It is from Ephesus that Paul writes to Corinth and in Ephesus, some traditions have it that John’s Gospel was written and the John of Revelation had his home. Whether or not Ephesians was written by Paul or by a close follower of his, doesn’t diminish its major significance. Thursday 20th: Read Ephesians 1:1-23 What do you sense is at the heart of this church’s life? Could you sum up the prayer in verses 15-23 in a sentence? Pray some of these words for our church today and tomorrow once more.

Friday 21st: Read Ephesians 6:10-24 As you read through these words and reflect on the church in Ephesus what words come to your mind summing up what is at the heart of the life of this church?

The Church in Philippi

The very first Roman Emperor, Octavian, later known as Augustus honoured Philippi with the status of a ‘Colonia’ giving the citizens who lived within its walls the same rights, privileges and responsibilities as citizens living in Rome itself. A key city for the whole of Macedonia it is the first place in what we now think of as Europe to receive the Gospel of Christ. In the account of Paul’s visit to Philippi in Acts his Roman citizenship plays a significant part (Acts 16:6-40) and in Philippians Paul then draws on that experience to think of Christians as ‘citizens’ in a ‘colonia’ of God’s Kingdom (Philippians 3:20). The church in Philippi gives Paul great joy. Saturday 22nd: Read Philippians 1:1-11 What gives Paul such joy when he thinks of the church in Philippi? Again, pray these words for our church. Sunday 23rd: Read Philippians 2:1-18 How does Paul think those who belong to the church in Philippi can ‘shine like stars’ in a world of darkness? Monday 24th: Read Philippians 4:4-23 As you read through these words and reflect on the church in Philippi what words come to your mind summing up what is at the heart of the life of this church?

Tuesday, Wednesday, The Church in Colossae Thursday 25 26 27 The Church in Colossae While Paul was in Ephesus (Acts 19) many of his co-workers helped to establish churches in that area. Epaphras, who had grown up in Colossae, played a big part in founding the church there. In all likelihood the church met in a house belonging to Philemon. Paul writes the most personal of all his letters to Philemon urging him to accept back into his household a runaway slave, Onesimus, no longer as a slave but as a brother in Christ. Tuesday 25th Read Colossians 1:1-23 By now you will have noticed how so many of Paul’s letters begin with a prayer of thanksgiving. Continue to use the words Paul uses in shaping your prayers for our church. Wednesday 26th Read Colossians 3:1-17 What would it have felt like to be a slave who came to be in Christ and so part of this church family? Thursday 27th Read Colossians 4:2-18 As you read through these words and reflect on the church in Colossae what words come to your mind summing up what is at the heart of the life of this church?

The Church Then and Now

Over the weekend bear in mind all you have read and all we will share about the church then in the New Testament and the church now, here in Highbury. Pray that God will grant us his Spirit that we may dream dreams together and come to share a vision for the future of our church to God’s glory.