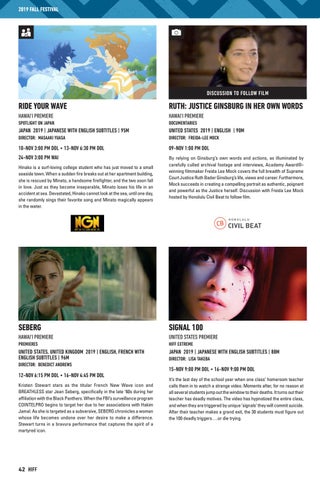 RUTH: JUSTICE GINSBURG IN HER OWN WORDS

Hinako is a surf-loving college student who has just moved to a small seaside town. When a sudden fire breaks out at her apartment building, she is rescued by Minato, a handsome firefighter, and the two soon fall in love. Just as they become inseparable, Minato loses his life in an accident at sea. Devastated, Hinako cannot look at the sea, until one day, she randomly sings their favorite song and Minato magically appears in the water.

12-NOV 6:15 PM DOL • 16-NOV 4:45 PM DOL Kristen Stewart stars as the titular French New Wave icon and BREATHLESS star Jean Seberg, specifically in the late ‘60s during her affiliation with the Black Panthers. When the FBI’s surveillance program COINTELPRO begins to target her due to her associations with Hakim Jamal. As she is targeted as a subversive, SEBERG chronicles a woman whose life becomes undone over her desire to make a difference. Stewart turns in a bravura performance that captures the spirit of a martyred icon.

15-NOV 9:00 PM DOL • 16-NOV 9:00 PM DOL It’s the last day of the school year when one class’ homeroom teacher calls them in to watch a strange video. Moments after, for no reason at all several students jump out the window to their deaths. It turns out their teacher has deadly motives. The video has hypnotized the entire class, and when they are triggered by unique ‘signals’ they will commit suicide. After their teacher makes a grand exit, the 30 students must figure out the 100 deadly triggers….or die trying.