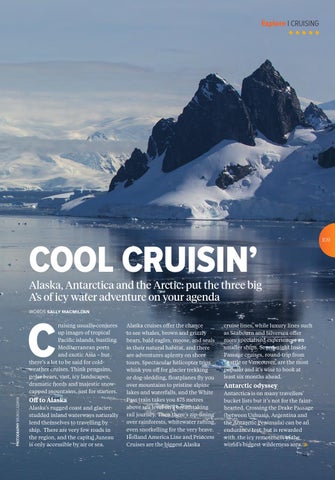 Alaska, Antarctica and the Arctic: put the three big A’s of icy water adventure on your agenda WORDS SALLY MACMILLAN

Off to Alaska Alaska’s rugged coast and glacierstudded inland waterways naturally lend themselves to travelling by ship. There are very few roads in the region, and the capital Juneau is only accessible by air or sea.

Alaska cruises offer the chance to see whales, brown and grizzly bears, bald eagles, moose, and seals in their natural habitat, and there are adventures aplenty on shore tours. Spectacular helicopter trips whisk you off for glacier trekking or dog-sledding, floatplanes fly you over mountains to pristine alpine lakes and waterfalls, and the White Pass train takes you 875 metres above sea level on a breathtaking rail journey. Then there’s zip-lining over rainforests, whitewater rafting, even snorkelling for the very brave. Holland America Line and Princess Cruises are the biggest Alaska

cruise lines, while luxury lines such as Seabourn and Silversea offer more specialised experiences on smaller ships. Seven-night Inside Passage cruises, round-trip from Seattle or Vancouver, are the most popular and it’s wise to book at least six months ahead.

Antarctic odyssey Antarctica is on many travellers’ bucket lists but it’s not for the fainthearted. Crossing the Drake Passage (between Ushuaia, Argentina and the Antarctic Peninsula) can be an endurance test, but is rewarded with the icy remoteness of the world’s biggest wilderness area. 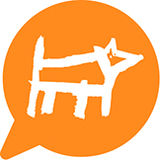