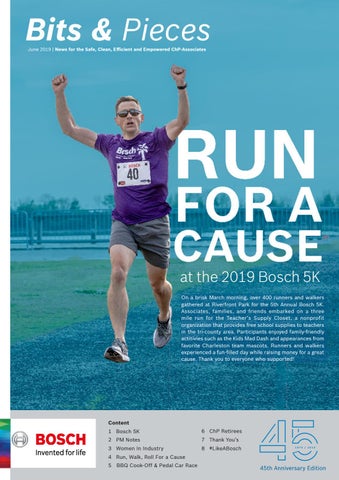 at the 2019 Bosch 5K On a brisk March morning, over 400 runners and walkers gathered at Riverfront Park for the 5th Annual Bosch 5K. Associates, families, and friends embarked on a three mile run for the Teacherâ&#x20AC;&#x2DC;s Supply Closet, a nonprofit organization that provides free school supplies to teachers in the tri-county area. Participants enjoyed family-friendly actitivies such as the Kids Mad Dash and appearances from favorite Charleston team mascots. Runners and walkers experienced a fun-filled day while raising money for a great cause. Thank you to everyone who supported!

movies i n In Marion S quare. She 8 #LikeABosch c rab soup r uns i n our 3 Women Industry veins, and grits in our soul. 4 Run, Walk, Roll For a Cause 5 BBQ Cook-Off & Pedal Car Race

PM Notes May was a busy month. We hosted the Spring All Associate Meetings which focused on change, the current business situation and our role during this time. We appreciate the feedback we have received and will continue working on the commitments we have made to each of you. We love seeing our associates wearing multi-colored #LikeABosch shirts. This is one way to recognize our accomplishments over the last 45 years and serves as a reminder that we must think out of the box, bring new ideas and Drive. ChP #LikeABosch. In May we were presented with the Gateway Award by the South Carolina German American Chamber for our accomplishments in furthering German-American business relations in South Carolina. We were also thrilled to announce that ChP was awarded the IPB (Integrated Power Brake) Project! A big thank you goes out to everyone involved in this project planning and to each of you. Unfortunately, the overall business situation at both PS and CC is still very challenging. Let’s continue to Work TOGETHER. Bring IDEAS. And help Drive. ChP into the future!

St. Patrick’s Day Parade For the first time, Bosch participated in the Park Circle St. Patrick’s Day Parade. Around 20 associates and family members attended the event wearing green #LikeaBosch shirts and passed out candy to the spectators. A special thank you to Peter Hofesmann for the great idea and organization!

Lowcountry STEM Fest The Charleston STEM Festival is a celebration of science, engineering, technology, and math in the lowcountry. Bosch partnered with the Michigan Mind Trekkers to provide a hands-on STEM experience through interactive demonstrations. Our Bosch volunteers spread their passion to students through educational and fun STEM activities. Thanks to everyone who came out!

Bass Fishing Tournament On a warm May morning, 89 participants gathered at Black‘s Fish Camp for the 38th Annual Bosch Bass Fishing Tournament. After a day out on the water, 96 fish were caught for a total weight of 244 pounds. This event raised $1,370 for Hospice of Charleston. Congratulations to Wade Cook and Troy Wolf for taking first prize by catching a total of 20.25 pounds! Thank you to everyone who supported the tournament.

Charleston Women In Industry Day 2019 The first ever Women In Industry Day was held on March 8th at the Citadel.The day long conference provided professional development opportunites to women through networking and education. Over 250 women attended the inaugural event to hear from 30 key-note speakers about personal branding, mindfulness, and industry skills. ChP‘s very own Blair Dorneanu, Meg Lanza, Gitta Unger, and Katherine Bergmann all spoke at the conference. A big thank you to Phoebe Bickford who played a key role in organizing the event!

March of Dimes Walk The annual Walk/run took place at Cannon Park on Saturday, April 27, 2019. It was a perfect day for the scenic, three-mile walk around beautiful downtown Charleston. We surpassed the team goal of $10,000 with a total donation of $10,400. Thank you to all associates who supported this event.

OF CHP TRIVIA What was the first product produced by the Bosch Charleston plant? a) EKP Pump b) KCA Nozzle c) diesel in-line “A”-type pump What year did the first ChP Apprenticeship class graduate? a) 1976 b) 1979 c) 1981 Find the answers on the back!

Run, Walk, Roll for a Cause

BBQ COOK-OFF & PEDAL CAR RACE On Friday, March 1st, 9 chefs competed for a year of bragging rights and the title of the best BBQ @ ChP. Competitors spent hours slow cooking their BBQ to be put to the test during an associate tasting. Josh Geiger (MFE3.2.1) was crowned the ChP BBQ Top Chef! Between BBQ sampling, 10 Directors competed head-to-head in

a pedal car race. Associates lined the corridor outside building 103 to see who would come out on top. Our competitors fought hard, but after 4 rounds of racing, Jon Krause defeated Meg Lanza to take the gold. Thank you to Louie Roberts and Shawn Sullivan for making this event possible!

RETIREE SPOTLIGHT Mike Cutrell and Hank Bennett will both give a chuckle when you ask them how ChP has changed over the years. After 44 years Mike can still recall the „greenies“ that were used to communicate information before internet access. Hank remembers having one computer

assigned to four desks. Bosch Charleston has changed immensly in the past 45 years and these two associates were a driving force for that transformation. Thank you, Hank and Mike for your dedication and many years of service to Bosch. You will be missed!

“What never changed was the enthusiasm of the people that I worked with, especially shop floor associates“

The following associates retired from Bosch Charleston between March - May 2019. We would like to thank you all for your many years of service. You will always be a part of the Bosch Charleston team. Michael Cutrell