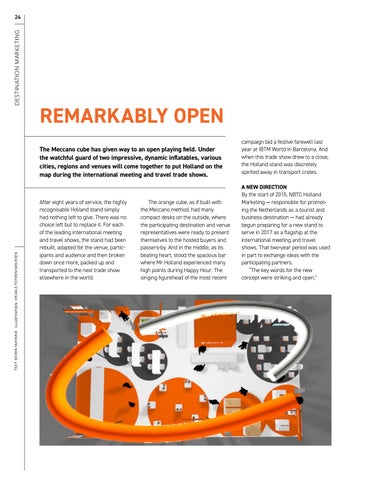 The Meccano cube has given way to an open playing field. Under the watchful guard of two impressive, dynamic inflatables, various cities, regions and venues will come together to put Holland on the map during the international meeting and travel trade shows.

After eight years of service, the highly recognisable Holland stand simply had nothing left to give. There was no choice left but to replace it. For each of the leading international meeting and travel shows, the stand had been rebuilt, adapted for the venue, participants and audience and then broken down once more, packed up and transported to the next trade show elsewhere in the world.

The orange cube, as if built with the Meccano method, had many compact desks on the outside, where the participating destination and venue representatives were ready to present themselves to the hosted buyers and passers-by. And in the middle, as its beating heart, stood the spacious bar where Mr Holland experienced many high points during Happy Hour. The singing figurehead of the most recent

campaign bid a festive farewell last year at IBTM World in Barcelona. And when this trade show drew to a close, the Holland stand was discretely spirited away in transport crates. A NEW DIRECTION By the start of 2015, NBTC Holland Marketing — responsible for promoting the Netherlands as a tourist and business destination — had already begun preparing for a new stand to serve in 2017 as a flagship at the international meeting and travel shows. That two-year period was used in part to exchange ideas with the participating partners. “The key words for the new concept were striking and open," 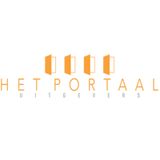 The special edition of Conference Matters, the magazine for conference managers who organise, or would like to organise, meetings in the Net...

The special edition of Conference Matters, the magazine for conference managers who organise, or would like to organise, meetings in the Net...