All the things I never said 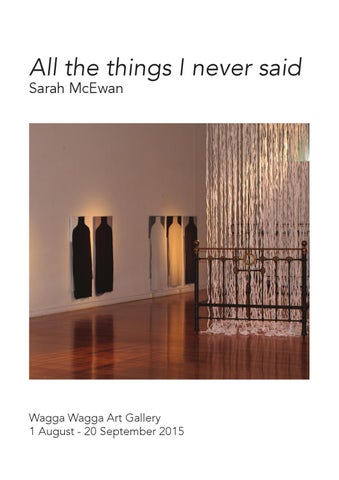 All the things I never said Sarah McEwan

At the heart of the of the struggle of feminism...has been the necessity of making woman credible and audible. Billions of women must be out there on this seven-billion-person planet being told that they are not reliable witnesses to their own lives, that the truth is not their property, now or ever. The ability to tell your own story, in words or images, is already a victory, already a revolt.

All the things I never said explores the female voice and how culture, history and lived experience mark bodies and form internal architectures. It invites the audience into a private and confessional world where thoughts and feelings unfold using text, found objects and textile assemblages. This installation challenges traditional notions of self portraiture as the simple torso figures contain no face. By eliminating â&amp;#x20AC;&amp;#x2DC;the bodyâ&amp;#x20AC;&amp;#x2122;, this feminist action interrupts the Cartesian legacy of women being defined by their physical features. The external falls away and thoughts hold centre stage; repeating and falling, repeating and falling.

I had all the things in place but chose a tornado instead. The truth is startling. Uno 39. I would dream of smashing your head on the concrete. If only it were all different. My weakness, your weakness. Thank goodness you got over King St. Will you ever be the person I want you to be? If I was a man you would read my narrative as triumphant. I will not talk about it. Not now and not ever. And I know some things can never be fixed. You fill me with fear. I was a breathe of air that passed under your nose hair. You think you’re some kind of unrecognised genius, but that’s such a tired archetype. I can’t accept it. Nothing is transparent. I like being soft and bending in the wind. To be still and home and say goodbye.

Language has been granted too much power. The linguistic turn, the semiotic turn, the interpretative turn, the cultural turn: it seems that at every turn lately every ‘thing’ even materiality – is turned into a matter of language or some other form of cultural representation.1 Karen Barad As you read this text, take a moment to notice where the voice that is reading is located. Close your eyes for a short time, without the prompt of language, what enters your thoughts? Despite the dominance of language, we don’t think solely in words. While thinking is fundamental to consciousness, a person can be conscious without thinking, but it is not possible to be conscious without feeling. Our thoughts are an electro-chemical bricolage of sensations that flows, roils and fires. We assume our thoughts are in our heads, but recent research suggests that the mind ‘travels the whole body on caravans of hormone and enzyme, busily making sense of the compound wonders we catalogue as touch, taste, smell, hearing vision.’2 The world we experience is phenomenal, experienced as endlessly shifting possibilities at times without ‘voice’ beyond matters of language. “We” are not outside observers of the world, nor are we simply located at particular places in the world, rather we are part of the world in its on-going intra-activity.’3 Sarah McEwan’s works address related ideas of intra-activity. Her thoughts and labour, visible in the traces and tensions of the processes of making are signs of what Diane Ackerman describes as, ‘consciousness, the great poem of matter.’4 This materiality, subverts the conventions of self-portraiture and twentieth century Modernism’s purist, universalist aspirations and assumptions of 1 Karen Barad, ‘Posthumanist Performativity: Toward an Understanding of How Matter Comes to Matter’, Signs: Journal of Women in Culture and Society, 2003, vol. 28, no.31, p.801 2 Diane Ackerman, A Natural History of the Senses, Phoenix (London) 1996, p.45 3 Gill Jagger, ‘The New Materialism and Sexual Difference’, Signs: Journal of Women in Culture and Society, 2015, vol. 40, no.3, p.146 4 Ackerman. op cit p. 3

an absolute knowledge of fixed reality. McEwan’s works as part of a wider field of critical Feminist arts practice, question the problems of orthodox representations of gendered identity and the messy resistances of conflict and contradictions of women’s lived experience. By challenging the hegemonies of nature/culture and mind/body dichotomies that insist upon closed definitions of binary sexual difference, McEwan is working towards new forms of complex visual narratives. She is testing the issues involved in representing a contemporary emerging fragile female identity that remains constrained despite its chosen disguise; is disenfranchised, an often marginalised voice, whose testimony is intentionally withheld and culturally silenced. What we encounter here refers to the ‘work’ of cloth and the experience of women in culture. Textile’s haptic associations conjure memories of space/place fundamentally associated with the female. It can be perceived as a sign of domestic comfort and equally, when visibly damaged, its fragility can convey threat and anxiety. These ‘material matters’ resist orthodox interpretations of gendered identity and place, the veiling as concealment, provokes intrigue but without conventional visual codes it flaunts resistance – cues to meaning withheld despite the fragments of text beneath. McEwan’s complex, intimate works refuse easily located meaning, alluding to shifting intra-actions – of relationships and uncertain mutable order. As Sullivan says the messy resistance of new understanding encountered in visual arts practice relies upon ‘‘the rationality of intuition and the imagination of the intellect.”5 Take your time here in this uncertain space of repetitions and careful disguise where meaning is not the property of words alone.

All the things I never said

'All the things I never said' is an installation by Sarah McEwan that explores the female voice and how culture, history and lived experience mark bodies and form internal architectures. It invites the audience into a private and confessional world where thoughts and feelings unfold using text, found objects and textile assemblages.