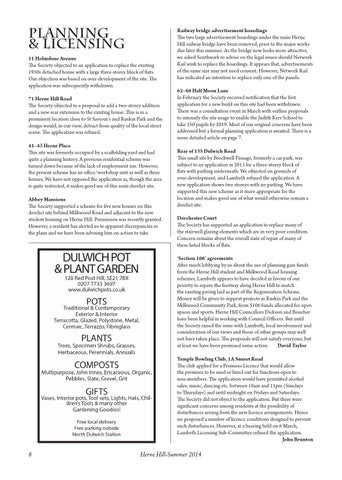 Planning &amp; Licensing 11 Holmdene Avenue The Society objected to an application to replace the existing 1950s detached house with a large three-storey block of flats. Our objection was based on over-development of the site. The application was subsequently withdrawn. 71 Herne Hill Road The Society objected to a proposal to add a two-storey addition and a new rear extension to the existing house. This is in a prominent location close to St Saviour’s and Ruskin Park and the design would, in our view, detract from quality of the local street scene. The application was refused. 41–43 Herne Place This site was formerly occupied by a scaffolding yard and had quite a planning history. A previous residential scheme was turned down because of the lack of employment use. However, the present scheme has an office/workshop unit as well as three houses. We have not opposed the application as, though the area is quite restricted, it makes good use of this semi-derelict site. Abbey Mansions The Society supported a scheme for five new houses on this derelict site behind Milkwood Road and adjacent to the new student housing on Herne Hill. Permission was recently granted. However, a resident has alerted us to apparent discrepancies in the plans and we have been advising him on action to take.

Railway bridge advertisement hoardings The two large advertisement hoardings under the main Herne Hill railway bridge have been removed, prior to the major works due later this summer. As the bridge now looks more attractive, we asked Southwark to advise on the legal issues should Network Rail wish to replace the hoardings. It appears that, advertisements of the same size may not need consent. However, Network Rail has indicated an intention to replace only one of the panels. 62–68 Half Moon Lane In February the Society received notification that the first application for a new build on this site had been withdrawn. There was a consultation event in March with outline proposals to intensify the site usage to enable the Judith Kerr School to take 350 pupils by 2019. Most of our original concerns have been addressed but a formal planning application is awaited. There is a more detailed article on page 7. Rear of 135 Dulwich Road This small site by Brockwell Passage, formerly a car park, was subject to an application in 2013 for a three-storey block of flats with parking underneath. We objected on grounds of over-development, and Lambeth refused the application. A new application shows two storeys with no parking. We have supported this new scheme as it more appropriate for the location and makes good use of what would otherwise remain a derelict site. Dorchester Court The Society has supported an application to replace many of the stairwell glazing elements which are in very poor condition. Concern remains about the overall state of repair of many of these listed blocks of flats. ‘Section 106’ agreements After much lobbying by us about the use of planning gain funds from the Herne Hill student and Milkwood Road housing schemes, Lambeth appears to have decided in favour of our priority to repave the footway along Herne Hill to match the existing paving laid as part of the Regeneration Scheme. Money will be given to support projects in Ruskin Park and the Milkwood Community Park, from S106 funds allocated for open spaces and sports. Herne Hill Councillors Dickson and Boucher have been helpful in working with Council Officers. But until the Society raised the issue with Lambeth, local involvement and consideration of our views and those of other groups may well not have taken place. The proposals will not satisfy everyone, but at least we have been promised some action. David Taylor Temple Bowling Club, 1A Sunset Road The club applied for a Premises Licence that would allow the premises to be used or hired out for functions open to non-members. The application would have permitted alcohol sales, music, dancing etc. between 10am and 11pm (Sundays to Thursdays) and until midnight on Fridays and Saturdays. The Society did not object to the application. But there were significant concerns among residents at the possibility of disturbances arising from the new licence arrangements. Hence we proposed a number of licence conditions designed to prevent such disturbances. However, at a hearing held on 6 March, Lambeth Licensing Sub-Committee refused the application. John Brunton 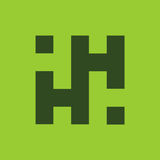