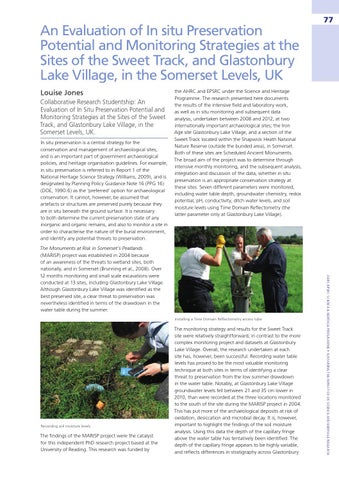 the AHRC and EPSRC under the Science and Heritage Programme. The research presented here documents the results of the intensive field and laboratory work, as well as in situ monitoring and subsequent data analysis, undertaken between 2008 and 2012, at two internationally important archaeological sites; the Iron Age site Glastonbury Lake Village, and a section of the Sweet Track located within the Shapwick Heath National Nature Reserve (outside the bunded area), in Somerset. Both of these sites are Scheduled Ancient Monuments. The broad aim of the project was to determine through intensive monthly monitoring, and the subsequent analysis, integration and discussion of the data, whether in situ preservation is an appropriate conservation strategy at these sites. Seven different parameters were monitored, including water table depth, groundwater chemistry, redox potential, pH, conductivity, ditch water levels, and soil moisture levels using Time Domain Reflectometry (the latter parameter only at Glastonbury Lake Village).

The findings of the MARISP project were the catalyst for this independent PhD research project based at the University of Reading. This research was funded by

The monitoring strategy and results for the Sweet Track site were relatively straightforward, in contrast to the more complex monitoring project and datasets at Glastonbury Lake Village. Overall, the research undertaken at each site has, however, been successful. Recording water table levels has proved to be the most valuable monitoring technique at both sites in terms of identifying a clear threat to preservation from the low summer drawdown in the water table. Notably, at Glastonbury Lake Village groundwater levels fell between 21 and 35 cm lower in 2010, than were recorded at the three locations monitored to the south of the site during the MARISP project in 2004. This has put more of the archaeological deposits at risk of oxidation, desiccation and microbial decay. It is, however, important to highlight the findings of the soil moisture analysis. Using this data the depth of the capillary fringe above the water table has tentatively been identified. The depth of the capillary fringe appears to be highly variable, and reflects differences in stratigraphy across Glastonbury

The Monuments at Risk in Somerset’s Peatlands (MARISP) project was established in 2004 because of an awareness of the threats to wetland sites, both nationally, and in Somerset (Brunning et al., 2008). Over 12 months monitoring and small scale excavations were conducted at 13 sites, including Glastonbury Lake Village. Although Glastonbury Lake Village was identified as the best preserved site, a clear threat to preservation was nevertheless identified in terms of the drawdown in the water table during the summer. 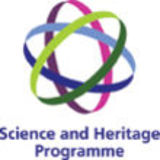 Sustaining the Impact of UK Science and Heritage Research

Conference publication of the AHRC/EPSRC Science and Heritage Programme, containing abstracts from funded projects and biographies of plenar...

Sustaining the Impact of UK Science and Heritage Research

Conference publication of the AHRC/EPSRC Science and Heritage Programme, containing abstracts from funded projects and biographies of plenar...