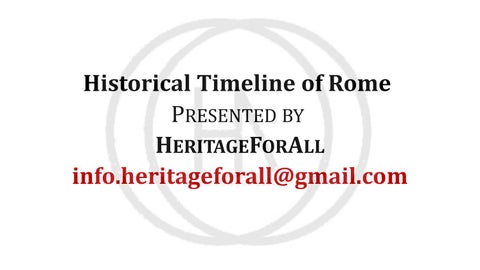 Rome – Royal Period “753 – 510 B.C.” • King is selected by Senatus Council • Imperium including religious, justice, and military authorities • Imperium authority was granted only by the people's decision and also to be confirmed by the gods throughout appearing a good news as well as other

• Quirites: Roman people • Romanus: army officers and soldiers, who to have a permission of doing the religious rituals and attending the Curiata committee.

human father who Greek goddess Venus born. During Trojan war, Ainas fight against Greeks and survive. After facing the dangerous and gods and goddesses protected him, he immigrated to Italy and founded his family that Romulus, Founder of Rome, came. *the 1st Greaco-Roman Poetic epic, written by Virgil

• Unifying the Civil Law with all of the Latin cities • Occupying Antium fortress and then, in 396 B.C., Veii city “Italian Troy”

Rome and Magna Graecia 314 B.C. • The greatest Greek colony “Tarentum” in the south of Italy

• 280 B.C., Greek commander Pyrrhus, Epirus king win his fight with the Roman troops in Heraclea by his Phalanx.

Roma, between Republic and Empire • Revolution Century “1st century B.C.”  There are new categories to Senatus. Those who are belonging to the public and creating the new aristocratic level “Nobilitas”. Those who was not originally nobles but

to be nobles through their positions. So, when they become consul, Roman called them “Novus Homo” – The new man.  The poverty of Italian villages  Businessmen “Ordo Equester” controlled and demonstrated the commercial and

financial activities. After Egypt become a Roman colony, Roman consuls appointed one of them as its ruler.  The slaves class was emerged.

become Roman colony. Consequently, Rome accepted it. • Greek revolutions by Mithradates • The final or 4th phase: Rome create “the state” and appointed in each state, Consul & Praitur who are belonging to Roman Senatus and in the same time, they are well businessmen or investors.

Rome at the End of Republic Period • Sulla and Dictatorship system 82 B.C. • Set the peace between the Roman organizations especially Senatus and rearrange the government memebers • Pomoeius become Magnus 79 B.C. • 71 B.C. Gladiatores “The argumenters” Revolution by Spartacus who Crassus beat • Pomoeius collaborated with Julius Caesar upgrading militarily the level of Roman army and confirm the Roman authority in the Roman states • 60 B.C. Pomoeius, Crassus and Casear form the trible government “Triumvirate” announcing the Empire system • After the death of Crassus, The civil war was indirectly announced between Pomoeius and Casear who called in Roman Senatus “Enemy of the People” • Casear win his war against Pomoeius

Rome at the End of Republic Period • Casear invest the Ptolemy 12th’s escape to Rome • Cesear Roman Consul 59 B.C. and grant Ptolemy 12th a confirmation letter announcing him Egyptian king and called him “Friend and ally the Roman people”. • Half of Egyptian annual revenues (6000 talent) as a bribe

• Egypt granted Rome some of its properties in the Mediterranean sea “Cyprus” 58 B.C. • Indirectly, Rome announced its protection on Egyptian kingdom • Gapenus Roman ruler in Syria use the Roman troops under supervision of the commander “Marcus Antonius” handling the Egyptian throne to Ptolemy 12th 55 B.C.

Rome at the End of Republic Period • supervision of the commander “Marcus Antonius” handling the Egyptian throne to Ptolemy 12th 55 B.C. • Marcus Antonius and Cleopatra 7th Daughter of Ptolemy 12th • 48 B.C. Pomoeius army escape to Egypt while Casear followed up to Alexandria and killed him there • In the same time, Casear put his troops in Alexandria pausing the conflict between Cleopatra and her

Rome – Empire Period “31 B.C. – 476 A.C”. • 28 B.C. Princeps = The First Citizen • Octavius steps down his authority • He get the title “Imprium Proconsulare” that to be a ruler of the half of Roman prosperities – where the major of Roman troops are located - for 10 years with Roman Senatus. In the same time, he is still controlling as a consul the Roman republic through the election process the administrative affairs.

• Senatus grant Octavius the title “Augustus” the distinguished one. So, Octavius become semi-god • Auctoritas, within this title, Octavius have literary influence which through, the Roman people should agree him passing the legislative right.

• 12 B.C. he become the great priest / the worship of emperor 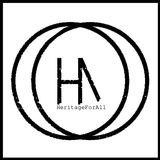 Historical Timeline of Rome and its Urban Architectural Form

Lecture “Historical Timeline of Rome and its Urban Architectural Form” was prepared and presented for the joint undergraduate students of Fa...

Historical Timeline of Rome and its Urban Architectural Form

Lecture “Historical Timeline of Rome and its Urban Architectural Form” was prepared and presented for the joint undergraduate students of Fa...