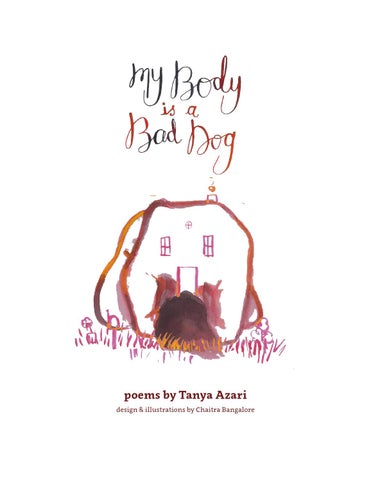 lockjaw summer untitled deep roots ode to ex-girlfriend he makes you feel small and the sheets, soaked through where you go to when you go away sometimes two shaky commas in this bed palmful of paper airplanes pedagogy of living untitled epilogue

lockjaw summer summer like the recovery half of the freestyle stroke. summer like the drive-in movie when the filmstrip burns up, like our starcharts when Venus is in retrograde. the hair on our legs sticking to each other. a small child playing in the water fountain asking me, are you a boy or a girl. me, telling the small child, it depends on what i feel like when i wake up in the morning. summer like the hotel of my body with a broken VACANCY sign in the window like, honey-did-you-remember-to-lock-the-door-behind-you, slipping keyrings on each othersâ&#x20AC;&#x2122; fingers, farmer's market blackberry jam staining our teeth heartbreak purple, our limbs surrendering to the year of the psychosomatic growth spurt. year of the skyscraper windows, siren call to all the birds. summer of the deep ache to tear out all the walls between our rooms and paint the ceiling like the seafloor. the small child asking me again, are you a simile or a metaphor?

Julian & I put our lunch into tupperwares and hop on the train where it hemorrhages above ground. He says we're going to Chapultepec, I say Coney Island; he sees my theme park and raises me an urban forest neck deep in skyline. For 45 minutes we don't think about our lovers. For 39 we bruise our tailbones on the hard plastic seats. At least 6 minutes are spent hanging from the railings or running through empty cars. We pass love notes folded into cranes to each other. We pass as straight. We pass a bus broke down on the side of the road.

deep roots August says that Shannon was born in the extra hour after midnight. August says that Shannonâ&#x20AC;&#x2122;s drum set is jealous of the rhythm his fingers play to his thighs. August says that Shannon sleeps in the backyard, even though i see him disappear into the room two doors from mine. by this he means: August sleeps in until 2pm every day. by this he means: that boy has been through more terrible than a burning bush split by an earthquake. twigs outside the door and foliage in the entryway. brittle tendrils hanging, greeting his six-foot frame. damp earth, deep roots, heavy pots keeping them stable. lichen surfing the turntable. August says this old growth is new, appearing down the hall like an afterthought: one day his room was empty, and one day it was not. his soft mouth all over the floor. his dangerous crowded against the windowpane. one day he wonâ&#x20AC;&#x2122;t stop holding onto life, and one day he pushes it away. who put the plants in the bedroom? who put a terrarium around the luminary? who put the glowing boy into electroshock therapy?

ode to ex-girlfriend meanwhile, the girl with the pink hair wraps her legs around my neck. she draws and quarters my body for the last time, asks me to lie, watches my frame unfurl. she looks like a boy that looks like a girl and i would do anything to make her want me again. maybe i'm a story sheâ&#x20AC;&#x2122;ll tell her friends. maybe i'm a punchline, instead. in her bed, i am a still life painted as a rotoscope. in her mouth, sheâ&#x20AC;&#x2122;s water and i'm dowsing stick. i bike home fast, scraping my knee when i break too quick, feeling like a piece of fruit that had its skin peeled off for a party trick.

he makes you feel small August has his tongue in someone else’s heartbreak wound, and Julian’s on the roof, twisting paper cranes like they were cigarettes. saying, he’s straight, Cam, and my best friend is a red peony, crushed in between someone’s palms. rewind: we show up at the party and lose each other, but i find August and he’s found the wave-break shape of a new person to push against. rewind: Julian quits smoking, August quits rock climbing his fingers down Julian’s arms, at least when they’re in public together. Julian starts carrying around small squares of paper. rewind: August meets Julian, Julian meets a model-pretty boy with olive skin and a slow, smooth kind of walk, and he knows he’s straight, but Julian knows he loves him, and it’s up to you to know which is which. and another boy realizes something cruel about himself that he won’t talk about. and another boy suffers on the good touch of someone who can’t love him right.

and the sheets, soaked through we haven't seen Julian in 8 days and there's a new body in August's bedroom. she leaves her dried sage on the living room table. ashblack tampons in the bathroom trash can. i can see stains five feet up on the wall where sheâ&#x20AC;&#x2122;s whispered incantations into the insulation. August treats her like a love spell. she says my name like a summoning sung offkey. everything she touches is glowing. everything she touches i pretend is my body.

sings the weight of something into my bed.

the boxer in my heart

clutches at its chest.

but it’s August’s breath, hot on the side my face,

an open oven door when the bread is rising—“Cam I miss him,” August says to

my right temple, and my heart rolls off the futon

body sagging with relief and

something like disappointment, feeling his voice speaking to my clavicle this time, his body burrowed into my side like i could

somehow hold him together, “I mean he makes my

Picasso started kissing him one day and

palmful of paper airplanes Julian, hollow boned, windowpane pure. chest wheezing like a broken radiator. Cam I'm (the most important thing to me) sorry for running away. but iâ&#x20AC;&#x2122;ve forgiven him. i always do. heâ&#x20AC;&#x2122;s the only one who looks at me and chooses to give instead of take. his queer kissing mine awake. this is the way we love each other. bodies flush with something completely different, kicking our feet against old broken boxcars, casting off our skins as the flashlights pass by. writing our stories in water on the walls. our secrets which are not really secrets at all.

pedagogy of living the city wears a plastic bag over its head to the party. gives us pillowtalk at 3am in the backseat of a taxi, hums to itself when the trains pass through. the city is beautiful when itâ&#x20AC;&#x2122;s drunk, flapping tongue all honest, says to us, loneliness looks good on you. brings out the wanting in your eyes. catch the city kissing itself in the mirror. catch it on the rooftop with a bottle of wine.

Shannon, a butterfly knife, flipping around someone elseâ&#x20AC;&#x2122;s wrist. Shannon, the wine bottle after the bar fight. The bloody knuckles and the bruised eye, all at the same time. Shannon, a typo in the playbill. A page missing from the middle of a library book. Shannon, a lip split against crooked teeth, bones cracked against concrete. He pivots off the 6th story balcony before we even realize it's not a metaphor/ anymore.

epilogue love me and watch me human disaster. love me and watch my dysphoria take flight, a crush of hormones murmuring their way down my legs. i’m the home of a polysyndeton of ex lovers, none of them quite knowing what to make of me. trauma sewn into the lining of my stomach, waiting for a body to press it into my bloodstream, waiting for a body to find the glass box above my chest that says “break in case of emergency;” the gaps around my body where no one is supposed to fit, the fist in my gut that comes out when someone touches me. my body a gift everyone kept trying to give me. my body the wrapping paper always shredded on the floor. my body a bad dog, licking itself in public, and always, always begging for more. My Body is a Bad Dog

a poetry chapbook about Cam and everything they don't fully understand // pdf download to print out at tinyurl.com/MBIABD

My Body is a Bad Dog

a poetry chapbook about Cam and everything they don't fully understand // pdf download to print out at tinyurl.com/MBIABD