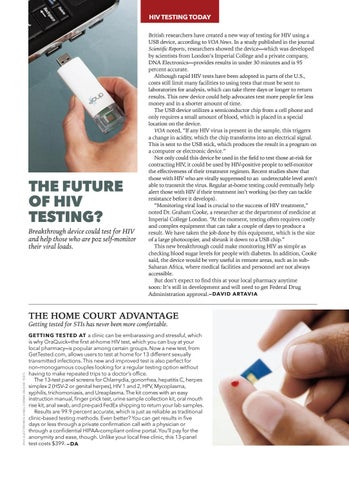 THE FUTURE OF HIV TESTING?

Breakthrough device could test for HIV and help those who are poz self-monitor their viral loads.

British researchers have created a new way of testing for HIV using a USB device, according to VOA News. In a study published in the journal Scientiﬁc Reports, researchers showed the device—which was developed by scientists from London’s Imperial College and a private company, DNA Electronics—provides results in under 30 minutes and is 95 percent accurate. Although rapid HIV tests have been adopted in parts of the U.S., costs still limit many facilities to using tests that must be sent to laboratories for analysis, which can take three days or longer to return results. This new device could help advocates test more people for less money and in a shorter amount of time. The USB device utilizes a semiconductor chip from a cell phone and only requires a small amount of blood, which is placed in a special location on the device. VOA noted, “If any HIV virus is present in the sample, this triggers a change in acidity, which the chip transforms into an electrical signal. This is sent to the USB stick, which produces the result in a program on a computer or electronic device.” Not only could this device be used in the ﬁeld to test those at-risk for contracting HIV, it could be used by HIV-positive people to self-monitor the eﬀectiveness of their treatment regimen. Recent studies show that those with HIV who are virally suppressed to an undetectable level aren’t able to transmit the virus. Regular at-home testing could eventually help alert those with HIV if their treatment isn’t working (so they can tackle resistance before it develops). “Monitoring viral load is crucial to the success of HIV treatment,” noted Dr. Graham Cooke, a researcher at the department of medicine at Imperial College London. “At the moment, testing often requires costly and complex equipment that can take a couple of days to produce a result. We have taken the job done by this equipment, which is the size of a large photocopier, and shrunk it down to a USB chip.” This new breakthrough could make monitoring HIV as simple as checking blood sugar levels for people with diabetes. In addition, Cooke said, the device would be very useful in remote areas, such as in subSaharan Africa, where medical facilities and personnel are not always accessible. But don’t expect to ﬁnd this at your local pharmacy anytime soon: It’s still in development and will need to get Federal Drug Administration approval.—DAVID ARTAVIA

Getting tested for STIs has never been more comfortable.

GETTING TESTED AT a clinic can be embarassing and stressful, which is why OraQuick—the ﬁrst at-home HIV test, which you can buy at your local pharmacy—is popular among certain groups. Now a new test, from GetTested.com, allows users to test at home for 13 different sexually transmitted infections. This new and improved test is also perfect for non-monogamous couples looking for a regular testing option without having to make repeated trips to a doctor’s ofﬁce. The 13-test panel screens for Chlamydia, gonorrhea, hepatitis C, herpes simplex 2 (HSV-2 or genital herpes), HIV 1 and 2, HPV, Mycoplasma, syphilis, trichomoniasis, and Ureaplasma. The kit comes with an easy instruction manual, ﬁnger prick test, urine sample collection kit, oral mouth rise kit, anal swab, and pre-paid FedEx shipping to return your lab samples. Results are 99.9 percent accurate, which is just as reliable as traditional clinic-based testing methods. Even better? You can get results in ﬁve days or less through a private conﬁrmation call with a physician or through a conﬁdential HIPAA-compliant online portal. You’ll pay for the anonymity and ease, though. Unlike your local free clinic, this 13-panel test costs $399. —DA