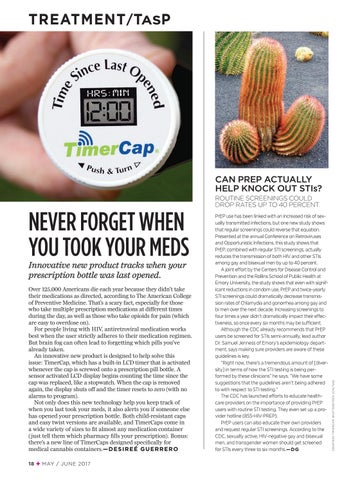 Over 125,000 Americans die each year because they didn’t take their medications as directed, according to The American College of Preventive Medicine. That’s a scary fact, especially for those who take multiple prescription medications at different times during the day, as well as those who take opioids for pain (which are easy to overdose on). For people living with HIV, antiretroviral medication works best when the user strictly adheres to their medication regimen. But brain fog can often lead to forgetting which pills you’ve already taken. An innovative new product is designed to help solve this issue: TimerCap, which has a built-in LCD timer that is activated whenever the cap is screwed onto a prescription pill bottle. A sensor activated LCD display begins counting the time since the cap was replaced, like a stopwatch. When the cap is removed again, the display shuts off and the timer resets to zero (with no alarms to program). Not only does this new technology help you keep track of when you last took your meds, it also alerts you if someone else has opened your prescription bottle. Both child-resistant caps and easy twist versions are available, and TimerCaps come in a wide variety of sizes to fit almost any medication container (just tell them which pharmacy fills your prescription). Bonus: there’s a new line of TimerCaps designed specifically for medical cannabis containers.— D E S I R E É G U E R R E R O 18

PrEP use has been linked with an increased risk of sexually transmitted infections, but one new study shows that regular screenings could reverse that equation. Presented at the annual Conference on Retroviruses and Opportunistic Infections, this study shows that PrEP, combined with regular STI screenings, actually reduces the transmission of both HIV and other STIs among gay and bisexual men by up to 40 percent. A joint effort by the Centers for Disease Control and Prevention and the Rollins School of Public Health at Emory University, the study shows that even with significant reductions in condom use, PrEP and twice-yearly STI screenings could dramatically decrease transmission rates of Chlamydia and gonorrhea among gay and bi men over the next decade. Increasing screenings to four times a year didn’t dramatically impact their effectiveness, so once every six months may be sufficient. Although the CDC already recommends that PrEP users be screened for STIs semi-annually, lead author Dr. Samuel Jenness of Emory’s epidemiology department, says making sure providers are aware of these guidelines is key. “Right now, there’s a tremendous amount of [diversity] in terms of how the STI testing is being performed by these clinicians” he says. “We have some suggestions that the guidelines aren’t being adhered to with respect to STI testing.” The CDC has launched efforts to educate healthcare providers on the importance of providing PrEP users with routine STI testing. They even set up a provider hotline (855-HIV-PREP). PrEP users can also educate their own providers and request regular STI screenings. According to the CDC, sexually active, HIV-negative gay and bisexual men, and transgender women should get screened for STIs every three to six months.— D G

NEVER FORGET WHEN YOU TOOK YOUR MEDS

ROUTINE SCREENINGS COULD DROP RATES UP TO 40 PERCENT.