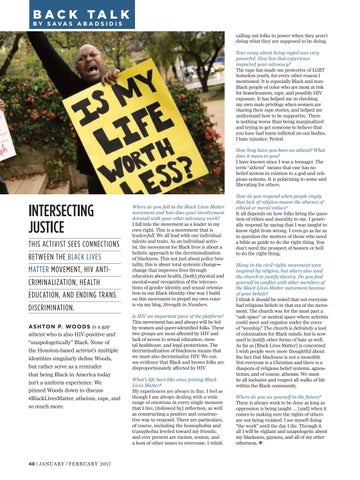 calling out folks in power when they aren’t doing what they are supposed to be doing. Your essay about being raped was very powerful. How has that experience impacted your advocacy? The rape has made me protective of LGBT homeless youth, for every other reason I mentioned. It is especially Black and nonBlack people of color who are most at risk for homelessness, rape, and possibly HIV exposure. It has helped me in checking my own male privilege when women are sharing their rape stories, and helped me understand how to be supportive. There is nothing worse than being marginalized and trying to get someone to believe that you have had harm inflicted on our bodies. I hate injustice. Period. How long have you been an atheist? What does it mean to you? I have known since I was a teenager. The term “atheist” means that one has no belief system in relation to a god and religious systems. It is polarizing to some and liberating for others.

INTERSECTING JUSTICE THIS ACTIVIST SEES CONNECTIONS BETWEEN THE BLACK LIVES MATTER MOVEMENT, HIV ANTICRIMINALIZATION, HEALTH EDUCATION, AND ENDING TRANS DISCRIMINATION. AS H TO N P. WO O DS is a gay atheist who is also HIV-positive and “unapologetically” Black. None of the Houston-based activist’s multiple identities singularly define Woods, but rather serve as a reminder that being Black in America today isn’t a uniform experience. We pinned Woods down to discuss #BlackLivesMatter, atheism, rape, and so much more.

Where do you fall in the Black Lives Matter movement and how does your involvement dovetail with your other advocacy work? I fall into the movement as a leader in my own right. This is a movement that is leader-full. We all lead with our individual talents and traits. As an individual activist, the movement for Black lives is about a holistic approach to the decriminalization of blackness. This not just about police brutality, this is about total systemic change— change that improves lives through education about health, [both] physical and mental—and recognition of the intersections of gender identity and sexual orientation in our Black identity. One way I build on this movement to propel my own voice is via my blog, Strength in Numbers. Is HIV an important piece of the platform? This movement has and always will be led by women and queer-identified folks. These two groups are most affected by HIV and lack of access to sexual education, mental healthcare, and legal protections. The decriminalization of blackness means that we must also decriminalize HIV. We can see evidence that Black and brown folks are disproportionately affected by HIV. What’s life been like since joining Black Lives Matter? My experiences are always in flux. I feel as though I am always dealing with a wide range of emotions in every single moment that I live, [followed by] reflection, as well as constructing a positive and constructive way to respond. There are particulars, of course, including the homophobia and transphobia leveled toward my friends; and ever present are racism, sexism, and a host of other issues to overcome. I relish

How do you respond when people imply that lack of religion means the absence of ethical or moral values? It all depends on how folks bring the question of ethics and morality to me. I generally respond by saying that I was taught to know right from wrong. I even go as far as to question the motives of those who need a bible as guide to do the right thing. You don’t need the prospect of heaven or hell to do the right thing. Many in the civil rights movement were inspired by religion, but others also used the church to justify slavery. Do you find yourself in conflict with other members of the Black Lives Matter movement because of your beliefs? I think it should be noted that not everyone had religious beliefs in that era of the movement. The church was for the most part a “safe space” or neutral space where activists could meet and organize under the cover of “worship.” The church is definitely a tool of colonization for Black minds, but is now used to justify other forms of hate as well. As far as [Black Lives Matter] is concerned I wish people were more thoughtful about the fact that blackness is not a monolith. Not everyone is a Christian and there is a diaspora of religious belief systems, agnosticism, and of course, atheism. We must be all inclusive and respect all walks of life within the Black community. Where do you see yourself in the future? There is always work to be done as long as oppression is being taught … [and] when it comes to making sure the rights of others are not being violated. I see myself doing “the work” until the day I die. Through it all I will be vigilant and unapologetic about my blackness, gayness, and all of my other otherness.

Empire Star Jussie Smollett on Cover of Plus Issue 116 Jan/Feb 2017 Empire star Jussie Smollett gets serious about being Black and gay in a post-Trump world and talks about HIV testing, safer sex, treatment, and finding a cure. Smollet was interviewed by his pal, comedian Sampson McCormick, another gay performer who uses his art and audience to talk about the need for HIV testing and stigma reduction. There are more rabble rousers living with HIV in this issue: media personality and artist Rae Lewis-Thornton, Black Lives Matter activist Ashton Woods & the star of Broadway's Hamilton, Javier Munoz. Plus: NIH announces people who are undetectable on treatment cannot transmit HIV to anyone else.