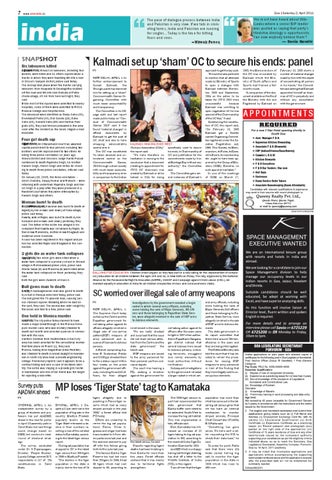 india SNAPSHOT six labourers killed BERHAMPUR: At least six labourers, including four women, were killed and 13 others injured when a tractor in which they were travelling fell into a river in Orissa’s Ganjam district, police said today. The mishap took place when the tractor carrying labourers from Nuapada to Goudagotha skidded off the road and fell into river Bahuda at Patrachuda village, 45 km from here last night, they said. While most of the injured were admitted to nearby hospitals, some of them were admitted to MKCG Medical College and Hospital here. The deceased were identified as Ranju Sahu (30), Brundabati Patra (30), Buli Gouda (18), Babu Sahu (45), Sukanti Sahu (65) and Harihar Panigrahi (25), they said.Tension prevailed in the area soon after the incident as the locals staged a road blockade.

Four get death rap DEHRADUN: An Uttarakhand court has awarded capital punishment to four persons including two brothers and life imprisonment to two others for killing three police constables six years ago. Almora District and Sessions Judge Kanta Prasad sentenced to death Rajendra Singh, his brother Kailash Singh, Harish Singh and Imtiaz for shooting to death three police constables, officials said today. On January 15, 2005, the three constables – Girish Chandra, Sanjay Kumar and Mahesh – were returning with undertrials Rajendra Singh and Harish Singh in a jeep after they were produced in a Ranikhet court when they were intercepted by Kailash Singh and others.

PTI NEW DELHI, APRIL 1: In further embarrassment to Suresh Kalmadi, the Shunglu panel has slammed him for setting up a “sham” Commonwealth Games Organising Committee with much lesser accountability and transparency. The Committee in its 103page sixth and last report made public today on "Conduct of Commonwealth Games 2010" said it has found "material changes" in official documents by Kalmadi to get the post of OC chief and also to have sweeping administrative control over it. The OC was constituted "to retain absolute and unhindered control on the Commonwealth Games, 2010 through a sham society with much lesser accountability and transparency even in comparison to the Indian

KALMADI: MAKIng enDs Meet Olympic Association (IOA)," the report said. “We have therefore no hesitation in coming to the conclusion that a document (relating to appointment for CWG OC chairman) was created by Kalmadi or at his behest in IOA for being

specifically used to secure his ends, ie Chairmanship of OC and justification for the commitments made by him at Montego Bay without any authority,” the Committee said. The Committee gave several instances of Kalmadi’s

approach to get the key post. “It would be also pertinent to mention that all attempts made by Ministry of Sports to open a dialogue with Kalmadi between November, 2003 and September, 2004 on the action to be taken for CWG 2010 were unsuccessful because Kalmadi was unwilling to open negotiation till he was assured of the Chairmanship of the OC ttee,” it said. Questioning the constitution of OC, the report said, “On February 10, 2005 Kalmadi got a Society named Organising Committee registered under the Societies Registration Act, 1860. This Society, its Memorandum, its Rules, its Executive Board, its membership etc. ought to have been approved by the Group of Ministers (GOM). However, no such approval was taken.” In one of the meetings of GOM on March 17,

MUZAFFARNAGAR: A woman was burnt to death allegedly by her in-laws over dowry at Toda village, police said today. Kawita, wife of Rajbir, was burnt to death by her husband and in-laws over dowry yesterday, they said. The father of the victim has alleged in his complaint that Kawita was set ablaze by Rajbir, father-in-law Mahendra, mother-in-law Bhagwati and maternal uncle Surender. A case has been registered in this regard and police has arrested Rajbir and Bhagwati in this connection.

Bull gores man to death BASTI: A septuagenarian man was gored to death by a bull in Haraiya area here today, police said. The bull gored the 70-year-old man, causing serious stomach injuries following which he died on the spot, they said. The animal was later caught by the locals and tied to a tree, police said.

One held in Monica murder NAGPUR: The city police today claimed to have made a major breakthrough in the Monica Kinrapure murder case, who was brutally stabbed to death last month and arrested a person in connection with the case. Santosh Sonekar from Hudkeshwar in East city area has been arrested for the sensational murder that took place on March 11, they said. Monica, hailing from Nagardhan (near Ramtek) was stabbed to death in broad daylight in Nandanvan in south city area near a private engineering college. Preliminary reports said it appears to be a contract killing and also a case of mistaken identity. The victim was staying in a private girls hostel in Nandanvan and one of her friend was the target for rejecting a love-offer.

RALLYIng FOR eDUCAtIOn: Children shout slogans as they take part in a rally calling for the implemention of compulsory education for all children between the ages of 6 and 14, in New Delhi on Friday. The rally, organised by the National Alliance for the Fundamental Right to Education (NAFRE), UNICEF and Campaign against Child Labour (CACL), demanded equality in education in India for all children irrespective of class and socio-economic status.

SC worried over illegal sale of army weapons PTI NEW DELHI, APRIL 1: The Supreme Court today pulled up the Centre and the Rajasthan government for not taking action against its officers allegedly involved in illegal sale of non-service pattern(NSP) weapons of army personnel and issuance of licences to dubious persons. A Bench comprising Justices B Sudershan Reddy and S S Nijjar directed them to file a status report within four weeks on the probe against the government officials, including three IAS officers, for their alleged

Investigations by the government revealed a larger racket in which several army officials, including some holding the rank of Major Generals, IAS officers and those belonging to Rajasthan State Service, were allegedly involved in the sale of NSP arms to dubious elements. involvement in the scam. "We are really shocked and surprised that the issue did not draw serious attention from the Centre and the state government," the bench said. NSP weapons are issued to the army personnel for their personal use from ordnance depots. The court was hearing a PIL seeking a direction against the government for

not taking action against its officers after the scam came to light in 2007 when authorities in Rajasthan's Ganganagar district noticed that several licenses were issued to dubious persons, including terrorists, smugglers and rowdy elements by local authorities without verification. Subsequent investigations by the government revealed a larger racket in which sev-

eral army officials, including some holding the rank of Major Generals, IAS officers and those belonging to Rajasthan State Service, were allegedly involved in the sale of NSP arms to dubious elements. The state government in its report submitted that there were around 284 beneficiaries in the scam and they are being interrogated. The Defence Ministry also told the court that it has decided to review the procedures for issuing NSP weapons to army personnel in view of the finding that they were illegally sold to unscrupulous elements.

CHENNAI, APRIL 1: An independent survey by a group of students and professors has put AIADMK ahead in the race for power in April 13 assembly polls in Tamil Nadu but said things could change based on DMK-led combine's nextround of electoral strategy. The survey, conducted under Dr S Rajanayagam, Director, `People Studies’, Loyola College, covered 3171 respondents in 117 of 234 constituencies in Tamil Nadu.

BHOPAL, APRIL 1: Despite a 12 per cent rise in the population of big cats in the country, Madhya Pradesh popularly known as the 'Tiger State' witnessed a decline in their numbers resulting in loss of this coveted status to Karnataka, according to the latest tiger census report. The big cat population has dropped to 257 in the latest tiger census from 300 tigers in 2006 in Madhya Pradesh. "The decline in the tiger population in the state is mainly due to the loss of 24

You must have heard about WikiLeaks where a senior BJP leader was quoted as saying that party’s Hindutva ideology is opportunistic. Can now anybody believe them? — Sonia Gandhi

Kalmadi set up ‘sham’ OC to secure his ends: panel

tigers allegedly due to poaching in Panna tiger reserve which had as many striped animals in the year 2006," a forest official told PTI today. Efforts are underway to revive the big cat populationin Panna. Three tigresses and a tiger had been trans-located to it from others parks since last year and the exercise seemed to pay off with two felines giving birth to five cubs last year. The famous Kanha Tiger Reserve too had lost more than 25 tigers. In 2006, it had 89 tigers which had now dipped to 60, according to

the latest census, he said. Reports regarding tigers' deaths had been trickling in from Kanha for more than two years. Forest officials contend that it was mainly due to territorial fights among them.

The 2006 tiger census report had recommended the state government that Kanha buffer zone needs to be extended South-West to increase the big cat habitat. This was implemented in toto, officials said. Now, Karnataka has witnessed an increase of 10 tigers taking its big cat population to 300, according to the recent All India Tiger Estimation Exercise for 2010. And MP, which is unhappy having lost the tiger state tag, has shot off a letter to the Wildlife Institute of India (WII), in this regard. "I am of view that the tiger

population was more than what has come out in the latest big cat census given that we too have an internal mechanism to monitor striped animals, Principal Chief Conservator (Wildlife) H S Pabla said. "Something has gone amiss. We have sent a letter requesting the WII to check their data base," he said. To press his point, Pabla said that there were 424 beats (areas having big cat) to monitor the tiger population in the state in 2006 which has risen to 495 now.

2005, the Memorandum of the OC was circulated by Kalmadi which the Ministry of Youth Affairs and Sports had framed a few months back. “A comparison of the document available on the file of the Ministry with the one Registered by Kalmadi on

February 10, 2005 shows a number of material changes made by him with the object of concentrating all powers in his hands,” the Committee said adding that Kalmadi appointed himself as chairman of OC in perpetuity and without any consultation with the government. 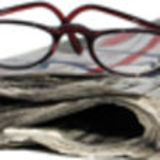