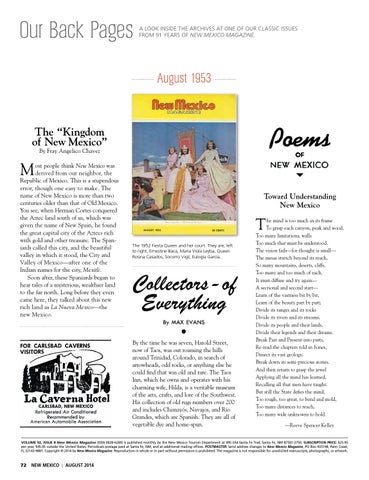 A LOOK INSIDE THE ARCHIVES AT ONE OF OUR CLASSIC ISSUES FROM 91 YEARS OF NEW MEXICO MAGAZINE.

The “Kingdom of New Mexico” By Fray Angelico Chavez

ost people think New Mexico was derived from our neighbor, the Republic of Mexico. This is a stupendous error, though one easy to make. The name of New Mexico is more than two centuries older than that of Old Mexico. You see, when Herman Cortes conquered the Aztec land south of us, which was given the name of New Spain, he found the great capital city of the Aztecs rich with gold and other treasure. The Spaniards called this city, and the beautiful valley in which it stood, the City and Valley of Mexico—after one of the Indian names for the city, Mexitli. Soon after, these Spaniards began to hear tales of a mysterious, wealthier land to the far north. Long before they even came here, they talked about this new rich land as La Nueva Mexico—the new Mexico.

By the time he was seven, Harold Street, now of Taos, was out roaming the hills around Trinidad, Colorado, in search of arrowheads, odd rocks, or anything else he could find that was old and rare. The Taos Inn, which he owns and operates with his charming wife, Hilda, is a veritable museum of the arts, crafts, and lore of the Southwest. His collection of old rugs numbers over 200 and includes Chimayós, Navajos, and Río Grandes, which are Spanish. They are all of vegetable dye and home-spun.

he mind is too much in its frame To grasp each canyon, peak and wood, Too many limitations, walls Too much that must be understood. The vision fails—for thought is small— The mesas stretch beyond its reach, So many mountains, deserts, cliffs, Too many and too much of each. It must diffuse and try again— A sectional and second start— Learn of the vastness bit by bit, Learn of the beauty part by part; Divide its ranges and its rocks Divide its rivers and its streams, Divide its people and their lands, Divide their legends and their dreams. Break Past and Present into parts, Re-read the chapters told in bones, Dissect its vast geology, Break down its semi-precious stones. And then return to grasp the jewel Applying all the mind has learned, Recalling all that men have taught. But still the State defies the mind, Too rough, too great, to bend and mold, Too many distances to reach, Too many wide unknowns to hold. A glimpse into the archives of New Mexico Magazine. This month we highlight August 1953.

A glimpse into the archives of New Mexico Magazine. This month we highlight August 1953.