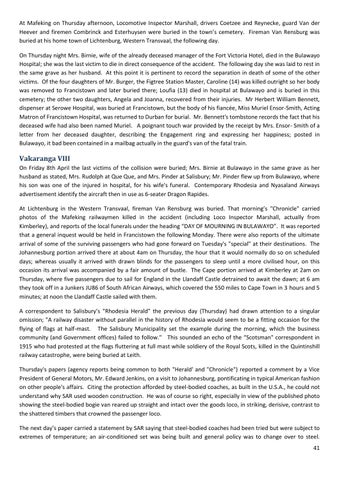 At Mafeking on Thursday afternoon, Locomotive Inspector Marshall, drivers Coetzee and Reynecke, guard Van der Heever and firemen Combrinck and Esterhuysen were buried in the town’s cemetery. Fireman Van Rensburg was buried at his home town of Lichtenburg, Western Transvaal, the following day. On Thursday night Mrs. Birnie, wife of the already deceased manager of the Fort Victoria Hotel, died in the Bulawayo Hospital; she was the last victim to die in direct consequence of the accident. The following day she was laid to rest in the same grave as her husband. At this point it is pertinent to record the separation in death of some of the other victims. Of the four daughters of Mr. Burger, the Figtree Station Master, Caroline (14) was killed outright so her body was removed to Francistown and later buried there; Loufia (13) died in hospital at Bulawayo and is buried in this cemetery; the other two daughters, Angela and Joanna, recovered from their injuries. Mr Herbert William Bennett, dispenser at Serowe Hospital, was buried at Francistown, but the body of his fiancée, Miss Muriel Ensor-Smith, Acting Matron of Francistown Hospital, was returned to Durban for burial. Mr. Bennett's tombstone records the fact that his deceased wife had also been named Muriel. A poignant touch war provided by the receipt by Mrs. Ensor- Smith of a letter from her deceased daughter, describing the Engagement ring and expressing her happiness; posted in Bulawayo, it bad been contained in a mailbag actually in the guard's van of the fatal train.

Vakaranga VIII On Friday 8th April the last victims of the collision were buried; Mrs. Birnie at Bulawayo in the same grave as her husband as stated, Mrs. Rudolph at Que Que, and Mrs. Pinder at Salisbury; Mr. Pinder flew up from Bulawayo, where his son was one of the injured in hospital, for his wife's funeral. Contemporary Rhodesia and Nyasaland Airways advertisement identify the aircraft then in use as 6-seater Dragon Rapides. At Lichtenburg in the Western Transvaal, fireman Van Rensburg was buried. That morning’s "Chronicle" carried photos of the Mafeking railwaymen killed in the accident (including Loco Inspector Marshall, actually from Kimberley), and reports of the local funerals under the heading “DAY OF MOURNING IN BULAWAYO”. It was reported that a general inquest would be held in Francistown the following Monday. There were also reports of the ultimate arrival of some of the surviving passengers who had gone forward on Tuesday's "special" at their destinations. The Johannesburg portion arrived there at about 4am on Thursday, the hour that it would normally do so on scheduled days; whereas usually it arrived with drawn blinds for the passengers to sleep until a more civilised hour, on this occasion its arrival was accompanied by a fair amount of bustle. The Cape portion arrived at Kimberley at 2am on Thursday, where five passengers due to sail for England in the Llandaff Castle detrained to await the dawn; at 6 am they took off in a Junkers JU86 of South African Airways, which covered the 550 miles to Cape Town in 3 hours and 5 minutes; at noon the Llandaff Castle sailed with them. A correspondent to Salisbury’s "Rhodesia Herald" the previous day (Thursday) had drawn attention to a singular omission; "A railway disaster without parallel in the history of Rhodesia would seem to be a fitting occasion for the flying of flags at half-mast. The Salisbury Municipality set the example during the morning, which the business community (and Government offices) failed to follow." This sounded an echo of the “Scotsman" correspondent in 1915 who had protested at the flags fluttering at full mast while soldiery of the Royal Scots, killed in the Quintinshill railway catastrophe, were being buried at Leith. Thursday's papers (agency reports being common to both "Herald' and "Chronicle") reported a comment by a Vice President of General Motors, Mr. Edward Jenkins, on a visit to Johannesburg, pontificating in typical American fashion on other people's affairs. Citing the protection afforded by steel-bodied coaches, as built in the U.S.A., he could not understand why SAR used wooden construction. He was of course so right, especially in view of the published photo showing the steel-bodied bogie van reared up straight and intact over the goods loco, in striking, derisive, contrast to the shattered timbers that crowned the passenger loco. The next day’s paper carried a statement by SAR saying that steel-bodied coaches had been tried but were subject to extremes of temperature; an air-conditioned set was being built and general policy was to change over to steel. 41 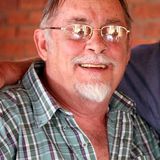