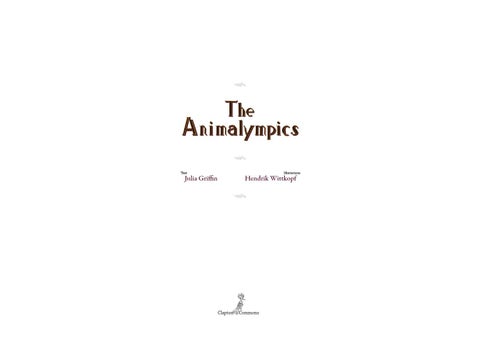 Fox and his friends took a look at their city, Cars, fumes and rubbish, oh what a pity! “How”, wondered Dog, “Can we make this place fun? A magical city that shines like the sun?”

“I’ve got it!” yelled Fox, “We’ll do something big. A party! A feast! A sporting shindig! We’ll race and we’ll rumble; we’ll hop, skip and jump, Our claws, manes and tails will make this place pump.”

Fox took his idea to the Head of the Land: Grumpy old Queen and her Royal Command. “We will host the Games around our city’s fine features, A sporting event for all bugs and all creatures.”

Old Queen sniffed at Fox’s suggestion; “Wouldn’t these creatures just add to congestion? What with the smell, the fighting, the poos? Such a beastly event would dirty our shoes!”

But Fox was stubborn and a bit of a sneak, He sent out a message in Pigeon’s sharp beak. “Please come to our Games. They’ll be fast, wild and free. London’s the top place for a creature to be.”

Soon Tower Bridge was groaning and rumbling, from far-away lands the creatures came tumbling. The wide-eyed, horned, claw-footed and proud, All posed and paraded and waved to the crowd.

To the Queen, Fox gave a smooth wink and grin, “See how these fit beasts will score gold and win. They may not be ordered, polite, calm or twee But look at the fun when it’s wild, wet and free.”

The big day began at St Paul’s Cathedral, With birds of all sorts from Chaffinch to Eagle. “Ready Set Go!” Time for ‘Swooping and Stealing’ A poor hatless priest was left quietly seething.

At the Ritz Hotel there was ‘Kipping and Snoozing’, A tiring event that some creatures feared losing. But Sloth and Koala went head to head, To see who’d be first in an eider-down bed.

There was blood, sweat and tears around Old Big Ben, The Chicken cried “Foul” and “Run it again!” The judges were fooled by an action so rash, when Tiger ate Elk in the fifty yard dash.

At Buckingham Palace the ‘Scent and Pong’ clash, Showed Skunk, Pig and Rat with outstanding panache. Old Queen held her nose and the Palace guards drooped, The smell was as strong as if “something” had pooped!

Smart Savile Row hosted ‘Scratching and Grooming’ Where Meercat and Dog left the tailors quite fuming Their fleas, nits and ticks made the shoppers feel itchy And Cat’s coughed-up fur ball made everyone twitchy.

Next the â&#x20AC;&#x2DC;Vole Vaultingâ&#x20AC;&#x2122; held by Tate Modern Poor Platypus ended up downcast and sodden. Whale and Dolphin splashed on the Thames Walrus and Wobbegong waved at their friends.

Moose, Yak and Deer fought hard by the Gherkin There was wrestling and jostling and even some smirkin’. Stag Beetles battled and Sheep tussled too, But everything stopped when Buck sneezed “Achoo!”

As the sun disappeared over London Eye, Hamster and Mouse ran loops in the sky, The party that followed was hosted by Sheep, They danced until dawn when they all fell asleep.

The Queen was excited, she laughed and applauded. Around her, the animals raced and marauded. Then, at the end, with most guests away, A proud happy Fox admired his day. The movement, the racing and Games had been fun, But the ultimate thing was the love that was spun. Tiger liked Deer and the Cat loved the Mouse, Even our Fox felt a fondness for Grouse.

With his new friend, the Queen, Fox looked at their city. Suddenly the place appeared……rather…….pretty! “Well done” said the Queen, “and wasn’t it fun? The Games have made London shine like the sun.”

Raised in Australia, Julia now lives in London. When she is not teaching or writing, she likes to entertain her son, walk her grumpy dog, source Londonâ&#x20AC;&#x2122;s finest coffee and bake a selection of lopsided cakes.

Hendrik has a background as a painter, with exhibitions in London and abroad. He studied Fine Arts in Munich and London and spent some years in Kolkata. When he is not travelling or painting, he walks with his son through Hackney Marshes, watches his cat, or eats a selection of sandwiches.