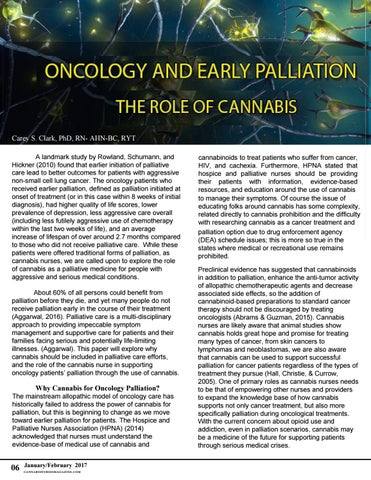 Carey S. Clark, PhD, RN- AHN-BC, RYT A landmark study by Rowland, Schumann, and Hickner (2010) found that earlier initiation of palliative care lead to better outcomes for patients with aggressive non-small cell lung cancer. The oncology patients who received earlier palliation, defined as palliation initiated at onset of treatment (or in this case within 8 weeks of initial diagnosis), had higher quality of life scores, lower prevalence of depression, less aggressive care overall (including less futilely aggressive use of chemotherapy within the last two weeks of life), and an average increase of lifespan of over around 2.7 months compared to those who did not receive palliative care. While these patients were offered traditional forms of palliation, as cannabis nurses, we are called upon to explore the role of cannabis as a palliative medicine for people with aggressive and serious medical conditions. About 60% of all persons could benefit from palliation before they die, and yet many people do not receive palliation early in the course of their treatment (Aggarwal, 2016). Palliative care is a multi-disciplinary approach to providing impeccable symptom management and supportive care for patients and their families facing serious and potentially life-limiting illnesses. (Aggarwal). This paper will explore why cannabis should be included in palliative care efforts, and the role of the cannabis nurse in supporting oncology patientsâ&#x20AC;&#x2122; palliation through the use of cannabis.

Why Cannabis for Oncology Palliation?

The mainstream allopathic model of oncology care has historically failed to address the power of cannabis for palliation, but this is beginning to change as we move toward earlier palliation for patients. The Hospice and Palliative Nurses Association (HPNA) (2014) acknowledged that nurses must understand the evidence-base of medical use of cannabis and

cannabinoids to treat patients who suffer from cancer, HIV, and cachexia. Furthermore, HPNA stated that hospice and palliative nurses should be providing their patients with information, evidence-based resources, and education around the use of cannabis to manage their symptoms. Of course the issue of educating folks around cannabis has some complexity, related directly to cannabis prohibition and the difficulty with researching cannabis as a cancer treatment and palliation option due to drug enforcement agency (DEA) schedule issues; this is more so true in the states where medical or recreational use remains prohibited. Preclinical evidence has suggested that cannabinoids in addition to palliation, enhance the anti-tumor activity of allopathic chemotherapeutic agents and decrease associated side effects, so the addition of cannabinoid-based preparations to standard cancer therapy should not be discouraged by treating oncologists (Abrams & Guzman, 2015). Cannabis nurses are likely aware that animal studies show cannabis holds great hope and promise for treating many types of cancer, from skin cancers to lymphomas and neoblastomas, we are also aware that cannabis can be used to support successful palliation for cancer patients regardless of the types of treatment they pursue (Hall, Christie, & Currow, 2005). One of primary roles as cannabis nurses needs to be that of empowering other nurses and providers to expand the knowledge base of how cannabis supports not only cancer treatment, but also more specifically palliation during oncological treatments. With the current concern about opioid use and addiction, even in palliation scenarios, cannabis may be a medicine of the future for supporting patients through serious medical crises. 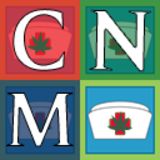 The beginning of the New Year 2017 is here! Many states this last legislative session passed medical and/or recreational cannabis legislatio...

The beginning of the New Year 2017 is here! Many states this last legislative session passed medical and/or recreational cannabis legislatio...