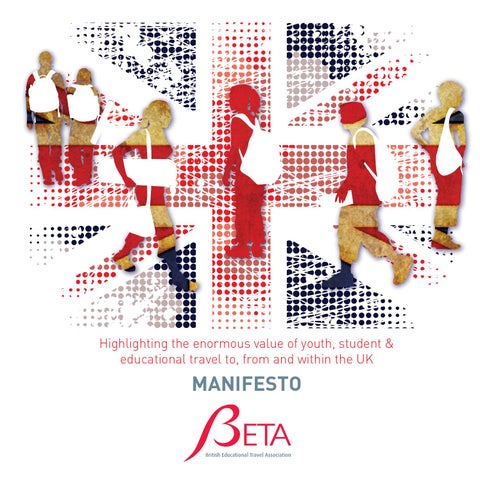 Highlighting the enormous value of youth, student & educational travel to, from and within the UK

ABOUT BETA The British Educational Travel Association (BETA) is a not for profit trade association representing specialist organisations and agents who provide services to the youth, student and educational travel sector including work exchange, gap years, school visits, language schools, activity holidays and adventure travel. This is the fastest-growing sector of the travel industry, currently amounting to more than a third of the revenue of the entire UK travel market. Our recent study shows that the inbound UK youth, student and educational travel market is currently worth in excess of ÂŁ20 billion per annum to the UK economy. (source: Britainâ&#x20AC;&#x2122;s Shining Opportunity, BETA). BETA has a growing membership of over 120 small and medium sized organisations. Our members employ over 20,000 staff each year and have a combined annual turnover of over ÂŁ2 billion. BETA is committed to helping create an open, enlightened society; one where Britain welcomes young people from overseas to experience the diversity of a world-class nation embracing a rich mixture of cultures and where young people from Britain are encouraged to travel overseas to gain international experience.

EXECUTIVE SUMMARY The UK’s educational travel sector is uniquely successful in projecting British values to the world through their products of excellence. This is aided by Britain being traditionally viewed by the world as a centre for educational excellence and contemporary youth culture. BETA recently conducted a survey of over 4,000 youth travellers aged 11-35 and 95% said that they would recommend the UK to friends and family – a powerful army of UK ambassadors! (source: Great Britain, at the Heart of Global Youth Travel). It is forecast that there will be over 300 million youth, student and educational travel trips per year by the year 2020 (source: UNWTO). This represents an enormous opportunity for the future growth of the UK travel and education sectors and by reducing the barriers to growth and increasing the welcome to youth travellers this sector has the potential to be one of the UK’s largest exports. Educational travel not only contributes directly to the economic wealth of Britain but also to the social fabric of the country by developing international understanding and empathy. It is a vital ingredient for Britain’s future prosperity and values as a society. BETA urges Government to: 1. Increase and improve consultation between the industry and Government departments on issues that affect the travel industry 2. Recognise the economic contribution made by the inbound market by addressing the “Challenges to Growth” contained in this manifesto 3. Take into consideration the importance of the educational travel sector when introducing legislation that directly or indirectly affects the sector 4.

Continue to encourage British young people to travel the world where they not only contribute to the societies they visit but also to return to Britain with better skills and enhanced understanding.

WHY IS THE SECTOR IMPORTANT? YOUTH AND STUDENT TRAVEL GENERATES SUBSTANTIAL ECONOMIC BENEFITS FOR BRITAIN BETA represents organisations primarily focused on providing or supplying services to young travellers (aged between 11 and 35 years) in the inbound and outbound markets. Youth travel accounts for 39% of all inbound visitors to Britain, 45% of bed nights and 35% of the annual visitor spend (source: VisitBritain). Young travellers offer real opportunities for dispersal of spend away from gateway cities and increased economic activity within the regions receiving them. The UK Government recognises that the global education market has grown dramatically over the past 40 years, and forecasts more growth to come. It sets out an ambitious plan to grow international enrolment in higher education by 15–20% which equates to an extra 90,000 students in the next five years. To achieve these numbers against strong international competition Britain needs to offer itself not just as a great education destination but also as a great travel destination. The tourism economy is currently worth £127bn and estimated to grow to £257bn by 2025, accounting for 10% of UK GDP. In 2013 more than 32.89 million international visitors spent a record £20.99 billion in Britain. (source VisitBritain). BETA represents many of the organisations who provide services for this sector and should be recognised for the potential they possess to bring increased benefit to the economy – not least from an employment perspective; the sector is the nation’s sixth largest industry and is a major employer of school leavers and young people – 44% of people employed in the sector are under the age of 30 compared to the national average of 24%. (source: UK Tourism Statistics 2013, Tourism Alliance).

YOUTH TRAVEL IS GOOD FOR BRITAIN’S FUTURE Young travellers are an investment for the future prosperity of the country. BETA wants the UK government to adopt strategies to encourage both inbound and outbound youth and student travel. Promoting international youth travel provides a competitive advantage for Britain and must be a continuing part of Britain’s engagement with the world. Travel from a young age provides experiences, forms opinions and allows greater cultural understanding and tolerance of other cultures and nationalities and a clearer knowledge of the world. These experiences contribute directly to the UK economy and the overall competitiveness of Britain. BETA members provide a powerful army of young ambassadors, that are sharing their travel experiences frequently, giving value to the destination over a lifetime.

“To compete in the global race the UK must create graduates with a global outlook that makes them more attractive to potential employers and benefits the wider economy.” (source: Universities and Science Minister, David Willetts - July 2013).

CHALLENGES TO GROWTH VISAS FOR OPPORTUNITY AND PROTECTION Britain’s image, effectiveness and influence on the world stage is enhanced by the many young people who visit Britain as travellers, temporary workers or students who then return home to pursue careers that very often lead to a position of influence in politics or industry. Britain needs to recognise the importance and potential of emerging powers and ease the visa process for young visitors from these non-traditional source countries. BETA’s preferred policy is one of flexibility and welcome to those young foreigners whose presence is likely to bring both immediate and longer term economic and public diplomacy benefits to the UK. BETA supports the view that having robust systems in place to verify the intent and bona fides of students and other young people coming to the UK are essential. However, international colleges and English language schools have been subjected to a raft of regulatory requirements and inspections in recent years. While this has significantly reduced abuse, the outcome is a complex framework which contains much duplication and lacks cohesion. BETA calls for a proper review, in collaboration with the sector, of regulations and requirements to agree an appropriate and resource-efficient system of future management, control and compliance. TOURISM TAXATION High taxation on travel activities suppresses the overall attractiveness of the UK as a destination and holds back the potential for economic growth. The World Economic Forum’s 2013 report on international competitiveness showed that the UK ranked 138th out of 140 countries in terms of taxation on tourists. (source: The Travel and Tourism Competitiveness Report, WEF - 2013). BETA urges the government to take heed of the Deloitte/ Tourism Respect study which has estimated that reducing VAT on accommodation and attractions could result in a net present value gain for the Treasury of £2.6bn over 10 years. (source: UK Tourism Statistics 2012, Tourism Alliance).

All images used throughout this document were supplied by Shutterstock.com 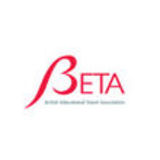 The first document was created back in 2007 and whilst there have been some successes there are still significant barriers to growth for our...

The first document was created back in 2007 and whilst there have been some successes there are still significant barriers to growth for our...