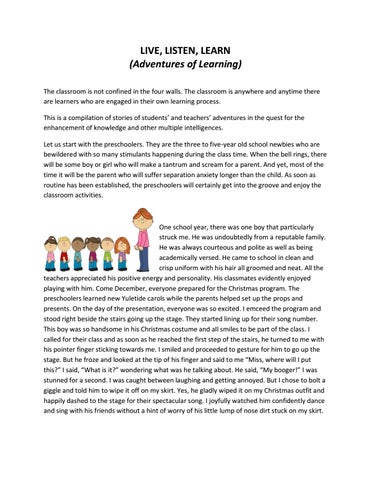 LIVE, LISTEN, LEARN (Adventures of Learning) The classroom is not confined in the four walls. The classroom is anywhere and anytime there are learners who are engaged in their own learning process. This is a compilation of stories of students’ and teachers’ adventures in the quest for the enhancement of knowledge and other multiple intelligences. Let us start with the preschoolers. They are the three to five-year old school newbies who are bewildered with so many stimulants happening during the class time. When the bell rings, there will be some boy or girl who will make a tantrum and scream for a parent. And yet, most of the time it will be the parent who will suffer separation anxiety longer than the child. As soon as routine has been established, the preschoolers will certainly get into the groove and enjoy the classroom activities.

One school year, there was one boy that particularly struck me. He was undoubtedly from a reputable family. He was always courteous and polite as well as being academically versed. He came to school in clean and crisp uniform with his hair all groomed and neat. All the teachers appreciated his positive energy and personality. His classmates evidently enjoyed playing with him. Come December, everyone prepared for the Christmas program. The preschoolers learned new Yuletide carols while the parents helped set up the props and presents. On the day of the presentation, everyone was so excited. I emceed the program and stood right beside the stairs going up the stage. They started lining up for their song number. This boy was so handsome in his Christmas costume and all smiles to be part of the class. I called for their class and as soon as he reached the first step of the stairs, he turned to me with his pointer finger sticking towards me. I smiled and proceeded to gesture for him to go up the stage. But he froze and looked at the tip of his finger and said to me “Miss, where will I put this?” I said, “What is it?” wondering what was he talking about. He said, “My booger!” I was stunned for a second. I was caught between laughing and getting annoyed. But I chose to bolt a giggle and told him to wipe it off on my skirt. Yes, he gladly wiped it on my Christmas outfit and happily dashed to the stage for their spectacular song. I joyfully watched him confidently dance and sing with his friends without a hint of worry of his little lump of nose dirt stuck on my skirt.

Another school year, there was an increase of new pupils. There was an exuberant four year old boy who called everyone’s attention with his cheerful entrance every day. He would always come in and greet everyone like an ardent politician campaigning for the first time. Sometimes he would even look for the school nurse who sat in her office and he would throw some pleasantries with her. In the classroom, this boy manifested some academic challenges, nonetheless, the teachers and classmates always awaited his presence and energy. He was also quick to rebound emotionally whenever he failed to complete some subject lessons. He was keen on his social skills that one day he tried to converse with a classmate who was very reserved. This classmate was very quiet and that he even chose to whisper when he spoke. Evidently, this bashful classmate was the exact opposite of our four year old potential politician. Nonetheless, that was not going to stop him from getting his vote. He calmly approached this classmate and opened up with the topic of their similarity in skin tone. He jokingly said how good it is to be the same darker skin shade and that they may not be seen very well at night. He continued to convey that he is a friend and that anyone can talk to him. He tried to convince him that it is nice to communicate and play with others. Unfortunately, after all the effort to coax his classmate to speak and befriend him, he slowly conceded with the thought that he cannot get everyone’s vote. As the school days went on, this zestful mini sunshine preschooler kept his glow brighter every day.

It’s not only the pupils that learn in school, the parents also become part of the learning process. Coming from a sectarian school, part of the curriculum is spiritual development. Starting from preschool, the pupils are taught how to pray. One lesson was to compose their own personal prayer. The pupils were given guidance and examples. The parents were also encouraged to help their children in this activity. There was this mother who was very reluctant to work with her child. She was an active collaborator in school programs and that made me wonder her hesitancy about the prayer lesson. I even came to know that her husband worked for a parish priest. Discernibly, I approached her and asked her reservations. She told me that she doesn’t speak english well and that her child might not get a good grade if she helps him compose his prayer. I explained to her that there are guide questions and that it is going to be just a short prayer. I assured her that the essence of the prayer is more important than the grammar. Her child will be assessed on how he understood his prayer and his sincerity about it. She calmly acknowledged my explanation and told me that she will try to work on it with her child. On submission day, this mother came to school with a big smile on her face and held on her hands a small illustration board decorated with lace. She proudly handed it to her child and instructed him to give it to his teacher. The child was brimming with pride that he broadcasted

to class that he and his mom composed and created his prayer project. They were answered prayers for both of them, the pupil who recited and understood the power of prayer, and the mother who zoned in to her artistic skill and made the board attractive lest the syntax of the content. The prayer still held the true essence of learning.

As a teacher, I consider myself as a learner as well. I donâ&#x20AC;&#x2122;t just embed in my brain the theories and concepts of the curriculum but more importantly, I have to learn how to impart those to the sponge brain of my students. The preschoolers have the most brain absorption capacity and capability. I relish the time when they converse with me and introduce their family circumstances. I get to learn more about their background and empathize with their situations. From the pupils, I get to hear about parents and other family members who are doting and responsible. On the other hand, I also get to know about the intricacies of their family strife. Each pupil has a story to tell, each pupil has a character to build. As a teacher, it is imperative that we listen and learn. 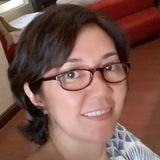 Anecdotes of fun in the classroom.

Anecdotes of fun in the classroom.