Introducing the work of Rebecca Saunders 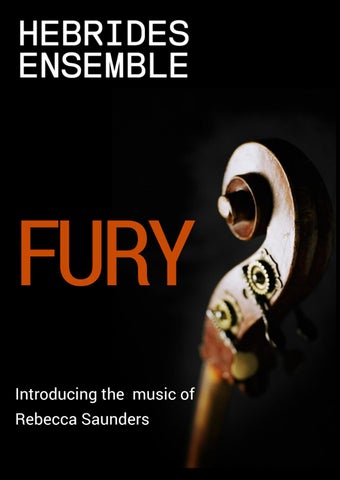 FURY Introducing the music of

In this first week of May we were looking forward to taking the music of Rebecca Saunders to Edinburgh. Glasgow and Perth, but, as with all public events just now, we’ve had to cancel due to the ongoing risk of Covid-19.

However, we want to encourage you to take part in a little ‘lockdown listening’ with us. Saunders’ music is visceral and uncompromising, but immensely rewarding to delve into. The two pieces we were due to showcase are the Quartet for clarinet, accordion, piano and double bass, and Fury II, a double bass concerto with an unusual ensemble of bass clarinet, cello, accordion, piano and percussion. You’ll see below that Rebecca’s programme notes for the pieces give very little away, but we’d encourage you to read on and you’ll find suggested recordings, videos and insights that I hope provoke you into giving Rebecca’s music a go, and get you excited about joining us when we can eventually return to performing these pieces live.

Quartet (1998) When composing I imagine holding the sounds and noises in my hands, feeling their potential between my palms, weighing them. Skeletal textures and musical gestures develop out of this. Then, like pictures placed in a large white room, I set them in silence, next to, above, beneath and against each other. Read the notes for performers Take a look at the score

Fury II (2009) ‘Fury’ means rage. An outbreak of rage. An effort to generate an extremely charged energy. In one breath. A frozen state composed with great fascination for the double bass, enchanted by the deep pulsating sounds and the percussive possibilities of the instrument. I was also fascinated by fragility – the fragile, expressive height of the instrument. An opposite. A dark side. When I watched Andreas Wylezol playing for the first time, I was impressed by the pronounced physicality and passionate gestures of his playing. In 2009, the time seemed right to develop the solo piece fury (2005) and put it into a new environment with ensemble. The ensemble expands the colour and sound palette of the double bass, bringing out new perspectives. Accordion, piano, bass clarinet, cello and percussion merge with the solo part into a single complex palette of sounds. Take a look at the score

A NOTE ON THE MUSIC

I cannot fully express my disappointment at not being able to bring the music of Rebecca Saunders to you live. We at Hebrides Ensemble were so looking forward to challenging ourselves (as we often do) and you, our dedicated listeners, in presenting the music of Rebecca Saunders, one of the most fascinating composers writing today. I first got to know Rebecca when she was a student at Edinburgh University studying composition with Nigel Osborne. We performed her early piece ‘All That She Wants’ (written in 1993) and I was immediately intrigued by her sound-scape, her interest in lower, bass frequencies in particular stood out at the time as being unusual. If I described her as a sonic architect it would not be inaccurate but it wouldn’t do her full justice. As she herself one said, she is ‘seeking out a new kind of Klangfarbe (timbre) in order to attain a most pure and intense form of musical expression.’ We were due to perform her Quartet for clarinet, accordion, piano and double bass (1998) – a fantastic work which immediately drags you into a highly dramatic situation almost like a dangerous game of sonic consequences between the four players. Like all great pieces of art it delivers much more than it initially presents. I like this performance on YouTube as I think watching the visual dialogue between the players is a big part of this piece. Unfortunately they only play half of the piece, but this complete audio version is fabulous. The other piece on our programme was to be Fury II (2009) – a concerto for double bass and ensemble which you can watch here. Luckily, in Enno Senft, we have one of the most experienced and accomplished double bass players in contemporary music today – he eats this stuff for breakfast! Once again, Rebecca paints a dramatic sound-scape, concentrating on specific aspects of technique and possibilities of all the instruments in the ensemble and somehow manages to weave a coherent and fascinating world of nocturnal, violent, black, threatening stillness, revealing more every time I listen to it. continued overleaf...

For further listening, Rebecca recommends this video specially made for the lockdown season which has just been uploaded by Dirk Rotbrust from Musikfabrik. These are smaller modules from a large percussion solo, which are usually overlapped in a live concert. She thinks he is pretty extraordinary. He has recorded different modules this week: Here is one of them. Lockdown Tapes 3 - Rebecca Saunders: dust - Module 1 Melody (2017/18)

We have every intention of bringing this music to you live at some point in the future but in the meantime keep well and enjoy this taster!

FIND OUT MORE We can’t wait to perform this music for you live, but in the meantime we’ve prepared three behind-the-scenes videos for you to help you get a taste for Rebecca Saunders’ work.

Artistic Director Will Conway met Rebecca over Zoom to find out

more about her inspirations and her composition process. Watch now

Enno Senft introduces Fury II, and shows off some of the extended techniques required to prepare this extraordinary piece. Watch now

Exceptional young accordion player Ryan Corbett was due to join Hebrides Ensemble for the first time on this tour, as part of our partnership with the Royal Conservatoire of Scotland. He demonstrates some of the unusual effects used in Saunders’ writing. Watch now

With her distinctive and intensely striking sonic language, Berlin-based British composer Rebecca Saunders (b.1967) is a leading international representative of her generation. Born in London, she studied composition with Nigel Osborne in Edinburgh and Wolfgang Rihm in Karlsruhe. Saunders pursues an intense interest in the sculptural and spatial properties of organized sound. chroma I - XX (2003-2017), Stasis and Stasis Kollektiv (2011/16) are expanding spatial collages of up to twenty-five chamber groups and sound sources set in radically different architectural spaces. insideout, a 90-minute collage for a choreographed installation, created in collaboration with Sasha Waltz, was her first work for the stage and received over 100 international performances. Most recently in 2017, Yes, an expansive 80-minute spatial installation composition, was written for Musikfabrik, Donatienne Michel-Dansac and Enno Poppe for the extraordinary architectural spaces of the Berlin Philharmonie and the St. Eustache Cathedral in Paris. Since 2013, Saunders has written a series of solos and duos for performers with whom she has collaborated closely over many years, including Bite (2016) for bass flute, Aether (2016) for bass clarinet duo, dust (2017/18) for percussion , O (2017) for soprano, hauch (2018) for violin, and Flesh (2017/18) for accordion. She has simultaneously pursued her keen interest in works in the concertante form, writing a double percussion concerto Void (2014), a trumpet concerto Alba (2015), and both Skin (2016) and Yes (2017) for soprano and large ensemble. Alba and Void marked the close of a triptych of works which also includes the violin concerto Still (2011). In 2016, her extended violin concerto Still (2011/16) was performed in collaboration with the choreographer Antonio RĂşz, the dancers of Sasha Waltz &amp; Guests, Carolin Widmann, the Junge Deutsche Philharmonie and Sylvain Cambreling. In 2018 her double bass concerto Fury II was choreographed by Emanuel Gat in collaboration with Ensemble Modern as part of the Story Water project. Saunders&#39; music has been performed and

premiered by many prestigious ensembles, soloists and orchestras including Ensemble Musikfabrik, Klangforum Wien, Ensemble Modern, Quatuor Diotima, Ensemble Dal Niente, Asko | SchĂśnberg, the Arditti Quartet, Ensemble Resonanz, Ensemble Recherche, ICE, the New vocals, Ensemble Remix, SWRSO, WDRSO and the BBCSO, amongst many others. Her compositions have been recognized with numerous international prestigious awards, including the 2019 Ernst von Siemens Music Prize (following one of the Young Composers&#39; Prizes of the Ernst von Siemens Music Foundation in 1996), the ARD and BMW musicaviva Prize, the Paul Hindemith Prize , four Royal Philharmonic Society Awards (for Stirrings Still in 2008, Fletch in 2013, Skin in 2017, and Yes in 2019), four BASCA British Composer Awards (for Solitude in 2013, Alba in 2016, Skin in 2017 and Unbreathed in 2018) , and the GEMA Music Prize for Instrumental Music. In 2015, Saunders received the Hans and Gertrud Zender Foundation Prize and the prestigious Mauricio Kagel Music Prize. Accordionist Teo Anzellotti&#39;s CD, ... of waters making moan, which included Saundersâ&amp;#x20AC;&amp;#x2122; eponymous work, won the German Record Critics&#39; Award of the Year for 2016. Saunders is in great demand as a composition tutor and teaches regularly at, amongst others, the Darmstadt Summer Courses and at the Impuls Academy in Graz. She was professor of composition at the Hannover University of Music, Theater and Media. She lives in Berlin and is a member of the Berlin Academy of Arts and the Sachsen Academy of Arts in Dresden. Saunders&#39; music has been published by Edition Peters since 1997. rebeccasaunders.net soundcloud.com/rebeccasaunders

With programmes that are diverse, imaginative and inspiring, Hebrides Ensemble has established itself as one of the foremost chamber music collectives in the UK. Co-founded and led by its artistic director, the cellist and conductor William Conway, the Ensemble is renowned for its fresh and intelligent approach to programming, which places contemporary music at the heart of a diverse range of repertoire. The Ensembleâ&amp;#x20AC;&amp;#x2122;s flexibility is its strength, drawing its performers from a pool of the most outstanding musicians in the UK and beyond, ensuring the exceptional performance standards for which it has become renowned. This is an international ensemble with its roots in Scottish culture, a collective which performs regularly at venues and festivals throughout the UK and Europe, and is regularly featured in broadcasts for BBC Radio 3. In recent years, the Ensemble has given premieres at the Muziekgebouw in Amsterdam, Londonâ&amp;#x20AC;&amp;#x2122;s Kingâ&amp;#x20AC;&amp;#x2122;s Place, The Wigmore Hall, Aldeburgh Festival, the Edinburgh International Festival and in 2018, made its debut appearance at the BBC Proms. Hebrides Academy supports the next generation of performers, composers, artistic directors and cultural leaders through its mentoring programme and Hebrides Digital allows audiences around the world to be part of our performances, using live streaming and cutting-edge digital technology. In October 2019 Hebrides Ensemble released its fourth recording in a series of composer-focused discs with Delphian. Airs from Another Planet: Chamber music and songs by Judith Weir follows discs profiling the works of Nigel Osborne and Peter Maxwell Davies, as well as the first recording of James MacMillan&#39;s Since it was the day of preparation..., which went straight to No 1 in the Specialist Classical Charts.

With thanks Hebrides Ensemble is hugely grateful to Rebecca Saunders, Enno Senft and Ryan Corbett for their contributions to our celebration of Saundersâ&amp;#x20AC;&amp;#x2122; work this week. We are particularly grateful for Creative Scotlandâ&amp;#x20AC;&amp;#x2122;s support during these unprecedented times, which has allowed us to ensure that our players were paid for their work: despite the fact that we could not safely proceed with the tour itself, months of practice and preparation go into these performances and we are thankful to be able to compensate our musicians for their dedication.

Thanks also to our audiences for staying with us as we navigate this complicated time. We look forward to performing for you again soon.

Introducing the work of Rebecca Saunders

We were due to tour the music of Rebecca Saunders in May 2020, but sadly lockdown restrictions prevented the tour from taking place. Use this 'virtual programme' to delve a little deeper into Rebecca's work as we look forward to reviving this tour in a coming season. 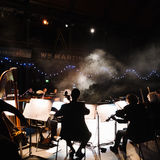