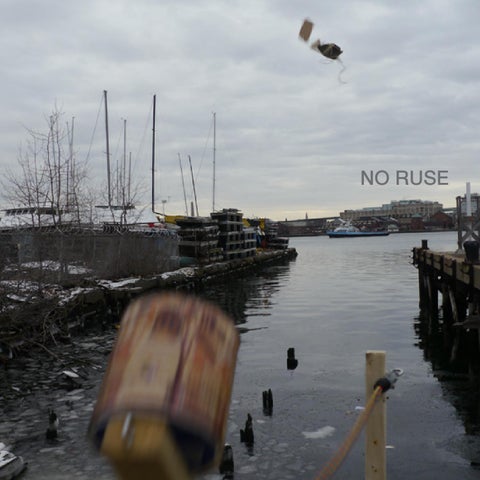 NO RUSE was produced by Heather Kapplow & Liz Nofziger on January 11, 2015 at 42°22’22.2”N 71°02’35.6”W It was Boston’s first underwater art exhibition and included works by 28 artists from the US, Canada and Europe. Andrew Abrahamson (US), Dirk Adams (US), Craig Deppen Auge (US), Louise Barry (US), Ashley Billingsley (US), Hannah Burr (US), Marie-Hélène Doré (CA), Richard Dorff (US), Michael J. Epstein (US), Nolan Fedorow (US), Isa, Oona & Götz Friederichs (US), Danielle Freiman (US), Brian Christopher Glaser (US), Cydney Gottlieb (US), David Ingenthron (US), Sara M. Ingram (US), Maura Jasper (US), Heather Kapplow (US), Carolyn Lewenberg (US), Ernie Kim (US), Debbie Nadolney (US), Liz Nofziger (US), Melissa Nussbaum Freeman (US), Midori Okuyama (US), Ted Ollier (US), Klaus Pinter (AT), Sarah Rushford (US), Rebecca Sittler (US), Jan Willett (US)

NO RUSE was a show about not knowing whether something being held onto is a blessing or a burden, and about letting go of things before knowing which is the case. It tried to acknowledge the essence of something’s potential importance without any commitment to it. We asked artists to submit (non-toxic) objects that they had held on to for over a year and not used. The open call asked for some demonstration of the object’s essence. By capturing this, the artists were free to release their precious things into the world. The artists didn’t know it until the date of the event, but our plan was to gather and catapult the objects into the sea. The title “NO RUSE” is actually a ruse, making phonic reference to the Persian new year holiday Naw-Rúz, where you divest yourself of things that you no longer need so that you can start the new year unburdened by past expectations or failures. Our official explanation of the title made reference to the (French) etymology of the word “ruse” which deals with pathways taken by game that eludes hunters. The project is based on own our habits as artists of hoarding materials with “artistic potential.” Via NO RUSE, we spectacularly released things that either eluded our ability to make artwork out of them, or which we recycled many times, and foisted that experience onto others.

Andrew Abrahamson submitted something to NO RUSE that he was dying to get rid of. We could tell that it was driving him slightly crazy. We had some doubts about accepting his object due to its potential toxicity, but consulted carefully with a very experienced engineer who assured us there was nothing to worry about. At the installation event, when it was revealed that the plan was to catapult peoples’ objects into the ocean, Andy quietly withdrew his because he knew it had lead in it. “I ended up pulling the attenuator partly because I realized the lead content but mostly because of a very visceral reaction I had to seeing things catapulted into the ocean. When I pictured my object on the bottom it fused instantly in my mind with the vast swaths of electronics abandoned in the environment and I couldn’t send it there. It’s become reborn to me now as a symbol of the great and mostly invisible environmental toll that electronics exact and I’m grateful to NO RUSE for that transformation. I plan to keep it on display at home now in its new role. So it ended up finding its new purpose in renewal rather than letting go and that itself was quite cathartic.”

Hannah was utterly ready to divest herself of her object. Sheâ&#x20AC;&#x2122;d turned it over in her hands and mind many times, and was ready for someone else to take it on. When it was clear that objects were being flung into the ocean, she was fine with that outcome for her object. But another artist, Carolyn, fell in love with Hannahâ&#x20AC;&#x2122;s object. After it was catapulted, when the tide had receded a bit, she climbed over the trash piles

along the shoreline to retrieve her object from the sea.

Nolan offered us a mustard bottle with several tablespoons of dust inside. We had to reject the bottle because it was plastic, but we accepted the dust. He delivered it from NY in person.

“For reasons unknown the demolition-by-implosion of a ten-story brick hotel building downtown—originally set for Thursday morning—was rescheduled for today: Saturday morning. I figured this would bring a bigger crowd than the original Thursday arrangement since most of the potential spectators would have been at work Thursday morning and therefore unavailable to leave work to watch. I was planning on taking advantage of a specific large public architectural overlook’s superb view of the soon to be demolished building and found I wasn’t alone – the place was packed – phones, cameras: out’n’ ready. At home I left an empty bottle of mustard in the fridge which I was saving for when I purchased a new full bottle of mustard of the same size so I could squirt the mustard from the new bottle into the bottle I had been saving in the fridge. I had just moved to a different state after living in another for three years. The sixteen oz. bottles being from different states were also from different grocery stores and were labeled as such. I wanted to keep using the old bottle of mustard as a souvenir and was now in need of new mustard to fill it up with. About a week after the implosion it hadn’t rained and I walked down to the implosion site’s actual and adjacent neighborhoods with the intention of searching for and hopefully sweeping-up and collecting some reddish dust that had been thrown in the air during and after the brick buildings’ fall to pieces—the dust eventually had to settle down all over the place. I was able to find some decent sized dust deposits nestled in between roads and curbs. No one was around and I swept up some dust and dumped it into a plastic grocery store bag and shoved it in my backpack along with the dust pan and mini-broom. Back at my apartment, using a sieve, I separated the pure reddish dust I was hunting for from sticks and pebbles and other gutter debris that had been swept up along with it. I poured the smooth reddish dust in a glass jar and closed a lid on it. The sticks and pebbles went into the brand new washed and empty mustard bottle which I had recently purchased from my new local grocery store.”

Maura submitted an object that had been very precious to her and to others. We were struck by it’s ancientness and delicateness. We fussed over it, over documented it and waffled for a week over whether we should tell her that our plan was to destroy it.

We agonized over her object for so long that we stopped liking it. We finally decided not to say anything until after the installation event. When we confessed our initial concerns to her she responded: “It’s totally ok, that was what it was for!” We were way more hung up on her object than she was...

Ernie’s object had been been making him feel like an inadequate person for three years. When he found out we were going to fling it into the harbor he seemed almost gleeful. He could barely wait for his object’s turn. Then he got caught up in talking with someone and missed it completely. When he realized, he was incredibly happy—he felt completely free of the ridiculous tyranny that the tiny metal thing had had over him.

Proportional Moon (the ball will look the exact size as the Moon in the sky, when standing on the circle)

Special thanks to Isa, Oona and Götz Friederichs—especially Götz. We are also very grateful to Jen Hall, Blyth Hazen and Michael J. Epstein for their contributions to the project and its documentation. All photos here were taken by the artists who submitted them or by Sophia Cacciola, Debbie Nadolney, Götz Friederichs, Lucas Mulder or Sarah Rushford. All other content not discussed above © 2015 NO RUSE Catalog documenting the first underwater art exhibition to occur in Boston MA (US) in January of 2015. Includes contributions by 28 artists...

Catalog documenting the first underwater art exhibition to occur in Boston MA (US) in January of 2015. Includes contributions by 28 artists...