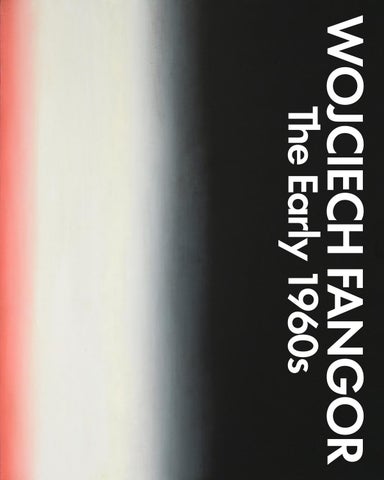 In 1961, curator Peter Selz included three paintings by Wojciech Fangor in the Museum of Modern Art’s survey exhibition titled 15 Polish Painters. Organized at the height of the Cold War, the show featured almost exclusively abstract painting and reinforced the role of MoMA as a bastion of cultural freedom for avant-garde artists from behind the Iron Curtain.1 While many of the works displayed at the museum showed the predominance of two major artistic trends—the pre-war tradition of Polish Constructivism and the French-inspired art informel—the quasi-geometrical and visually austere compositions by Wojciech Fangor eluded this dichotomy. Displayed in close proximity to one another (Fig. 1), Fangor’s paintings remained concerned “with rhythmic movement—rotating, ascending, descending movement—in 4

relation to time and space” and, rather than existing as singular canvases, they were meant to interact with the surrounding space, fashioning an immersive visual environment for the spectator.2 To evoke this kind of movement in Fangor’s case was to liberate a modernist autonomous painting from the wall and expand it into the surrounding space, a principle which he first embraced in 1958 and which remained central to his painting practice for fifty years to come.3 Yet, movement, understood as an act of physical relocation, was relevant also to Fangor’s own experience during that time. From the 1959 exhibition at Amsterdam’s Stedelijk Museum to his 1962 fellowship at the Institute of Contemporary Art in Washington, D.C., to, finally, the artist’s permanent move to the United States in 1966, the first half of the 1960s constituted for Fangor a moment of intense travel and intellectual exchange with the West. Moreover, this exchange brought him the kind of international recognition that was rare for artists from behind the Iron Curtain, even after the political thaw of 1956. By tracing the pictorial and physical registers of Wojciech Fangor’s movement during the early

years of the 1960s, this essay seeks to reveal the complexity of the cultural milieu—one originating from the communist East yet looking towards the new possibilities afforded by the capitalist West—within which the artist’s theories of abstract painting fully developed.

Between 1946, the year he was awarded a degree in painting from Warsaw’s Academy of Fine Arts in, and 1960, the year in which the artist first solidified his theory on abstract painting and space, Fangor’s practice went through numerous, often stylistically diverse stages. Trained in the academic tradition of Polish realism, he became inspired by Cubism and Surrealism soon after graduating from the Academy, only to face the official imposition of the Socialist Realism—a cultural doctrine that, in theory, prohibited avantgarde artistic experimentation—in 1949.4 During the early 1950s, Fangor was hired in the state-controlled Academy of Fine Arts in Warsaw, where he became involved in poster design and participated in the planning of public commissions to reconstruct the war-ravaged Polish capital. The artist’s sustained exposure to architecture resulted in his increased interest in and awareness of the role of space in contemporary art.5 Following Stalin’s death in 1953 and the subsequent cultural thaw that permitted a significant degree of artistic freedom, Fangor grew increasingly weary of traditional easel painting and, by the second half of the 1950s, his interests shifted towards using space as a medium itself. This became evident in Fangor’s 1958 Study in Space, a site-specific installation exhibited in a Warsaw gallery and designed together with Polish architect and graphic designer Stanisław Zamecznik.6 Comprising twenty monochromatic abstract compositions of semi-geometric shapes, Study in Space disrupted the traditional gallery environment by displaying majority of the works on wooden stands placed in close proximity to one another. Such a mode of presentation, Fangor explained in the text accompanying the exhibition, would prompt the spectator to traverse the installation, directly engaging him or her with the surrounding space. Despite Fangor’s trailblazing attempt to thrust contemporary Polish abstraction into new experiential registers, Study in Space met with criticism. In one review, critic Stanisław Stopczyk described the artist’s attempt to liberate painting from its frame as an act of artistic self-erosion, one which

constituted a creative regress vis-à-vis his earlier—seemingly socially engaged—Socialist Realist compositions.7 Szydłowski suggests that the poor critical reception of Fangor’s project in his home country was a result of the way modern art was understood in Poland in the late 1950s. Reacting against the vocabularies of realism imposed by the Soviets, the definition of avant-garde was fueled by modernist painting and did not yet privilege the kind of spatial art championed by Fangor and Zamecznik.8 Fangor recalled later that his intention to move outside of Eastern Europe, to “confront his ideas” with those that were being developed in the West, intensified at that time.9 In that context, year 1959 constituted a breakthrough: in addition to exhibiting his work at Polish Painting Now organized at the Stedelijk Museum in Amsterdam, in which the earlier spatial installation from 1958 was expanded by engaging with color, Fangor met Beatrice Perry, an American art dealer based in Washington D.C. Perry, whose Gres Gallery would go on to exhibit a number of artists from outside of the American canon, visited Warsaw in 1959 to learn more about recent developments in Polish contemporary painting.10 Although her meeting with Fangor appeared to have been more serendipitous then pre-determined (his telephone number was allegedly given to Perry by a friend who knew that Fangor was fluent in English), the ensuing relationship proved critical in both exposing the artist to the West and exposing the West to Fangor’s work.11 In one of his letters to Perry, written several months after Fangor moved to live with his sister in what was then a politically neutral Austria, the artist elaborated on his intention to migrate further West. His motivations, the letter stated, were neither political nor financial. He did not consider himself a political refugee and was able to make the ends meet through his employment at the Warsaw’s Academy. Rather, Fangor wrote, he felt that his painting practice was not taken seriously enough in Poland and that the contemporary American cultural landscape was better suited for the kind of project he and Zamecznik exhibited in 1958 and 1959: “I want to go to USA because of my exhibitions,” he wrote, “ [to] personally give them a space arrangement.”12 In another letter addressed to Perry, Fangor attached his and Zamecznik’s 1961 four-page typed treatise on contemporary painting, in which the need to heighten the viewer’s reception of the surrounding space, space moving beyond the canvas itself, was reiterated.13

Later in 1961 Perry organized Fangor’s first U.S. show at the Gres Gallery, and in December the same year the artist was offered a fourth-month Fellowship funded by the Ford Foundation at the Institute of Contemporary Arts in Washington, D.C. In the acceptance letter, ICA Director Robert Richman explained that Fangor would be expected to spend two weeks in residency in the country’s capital in addition to visiting “major art centers, art school and museums in Eastern and Midwestern America” on oneweek Visiting Professorship appointments.14 In a separate letter, addressed to schools the ICA solicited to participate in the program, Richman stressed the reciprocal nature of the exchange, while revealing his hope that through Fangor’s visit “[American] art, our ideas and our culture might have a salutary influence on the arts of Poland.”15 The goals Richman described in that letter fit neatly into the Cold War rhetoric of cultural rivalry between the United States and the Soviet Union, underscoring the breadth of American project to exert influence on the contemporary art of countries from behind the Iron Curtain. But while the 1962 visit indeed permitted Fangor to give lectures at esteemed American institutions (including Yale University’s School of Art and Architecture and Rhode Island School of Design) as well as interact with some of the key figures in American contemporary art (Josef Albers, Mark Rothko, and art historian Robert Goldwater, to mention just a few), to suggest that his exchange had profoundly influenced Fangor’s earlier theories of art—or that it influenced Polish contemporary painting at large—would be far fetched. Rather, it appears that the principal contribution of the fellowship to Fangor’s career was that it provided the artist with the time, place, and financial resources necessary to solidify the theoretical work he began in Europe. During the artist’s visit at the Ohio State University, for instance, Fangor was able to further develop the essay on painting he first authored in Zamecznik while in Warsaw. Focusing on the role and responsibility of the spectator, he examined the “immobility” of postwar painting—its inherently stable nature— due to which the viewer “could not become an active agent within the work (…) in what should probably have been an act of co-creation.”16 Traditional form of painting, what Fangor called a “Renaissance hole-in-the-wall through which the spectator is compelled to look,” made the viewer estranged from the work’s visual content.17 Contemporary painting, he argued, would instead

“radiate a force onto literal space which defines a zone of physical activity.” This attempt becomes evident in works like #29 from 1963 (Fig. 2), in which the centrifugal force of the spiral prompts one to investigate the formal qualities of the work, actively engaging what the artist called “a zone of physical activity” in front of the painting.18 Fangor’s intention to give the viewer agency and make him or her an active participator of the work anticipates the phenomenological breakthrough in American Minimalist art that saw one of its first manifestations in Robert Morris’s 1964 exhibition at New York’s Green Gallery.19 Contrary to the Minimalists, however, Fangor did not seem to discard painterly illusionism. The illusion of space contained within the composition was considered as an advantage, generating the viewer’s movement and, subsequently, fusing with the actual space around it. Moreover, such use of space and the inclusion

of the spectator in the work itself permitted “the inclusion of literal time and motion within the field of [one’s] perception.” Moving around and between these non-mimetic yet spatially engaging compositions, Fangor believed, the spectator would construct “in his mind a complete (…) spatial unity.”20 Such interest also explains the artist’s engagement with the seemingly visually confounding ovoid forms, concentric circles, dots, and semi-geometrical shapes, all of which prompted closer inspection by the spectator. Reasserting the critical role of movement and space within his artistic approach, Fangor would later name it the theory of “Positive Illusory Space.”

The ICA Fellowship concluded with an exhibition of Fangor’s work in Washington D.C. in April 1962. In May of the same year, upon the completion of the program, the artist was required to leave the United States and subsequently moved to Paris. Though Fangor’s five-year contract with Beatrice Perry was unexpectedly terminated after only one year, he remained determined to expand westwards.21 In 1964, he held one-man exhibition in the Schloss Morsbroich Museum in Leverkusen, Germany and later was invited to teach at Bath Academy in Corsham, England. In 1965, Fangor’s work was included in MoMA’s Responsive Eye exhibition, an event that prompted many critics to frame his work as Optical Art, while a grant he received from the Ford Foundation allowed Fangor to live and work in Berlin in the following months.22 In 1966, however, the sense of movement that accompanied the artist in the previous years finally came to a standstill. He was offered a teaching position at Farleigh Dickinson University in New Jersey and moved permanently to the United States. There, the artist continued to develop his idiosyncratic abstract idiom, gradually expanding the paintings’ physical scale and enriching the previously austere palette with a variety of dazzling and often highly contrasting colors.23 Fangor did not relocate back to Poland until 1999—ten years after the fall of the Berlin Wall—and yet, during all that time, it seems that his visually radiant vocabulary had never stopped moving. The author would like to thank Agnieszka Ficek, Horacio Ramos, and Magdalena Moskalewicz for their critical feedback on this essay. Patryk P. Tomaszewski is a Polish writer and art historian based in New York. He received an M.A. in History of Art and Archaeology from The Institute of Fine Arts, New York University and is currently pursuing a Ph.D. in Art History at The Graduate Center, City University of New York.