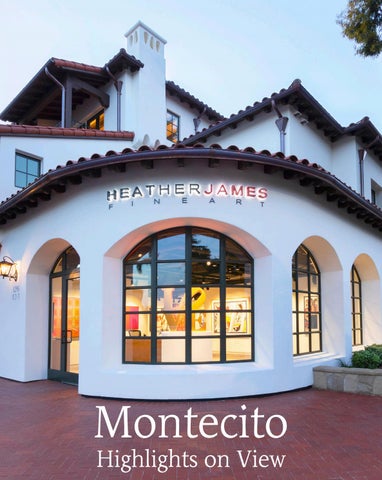 The year 1872 saw great inspiration and productivity for Claude Monet. It was the year that Monet painted the notable Impression, Sunrise, on view at the 1874 exhibition in Paris that gave the Impressionist movement its name. Earlier that spring while visiting Rouen, Monet created many oil paintings depicting the changing scenery as urban development took hold. Included among them was this more traditional landscape, Le Mont Riboudet a Rouen au Printemps, which embraces the natural beauty of the French countryside. The work was first purchased by Paul Durand-Ruel, Monet’s major patron and primary dealer, and later procured by fellow painter Gustave Caillebotte.

In Les Yeux Fleuris, Dalí depicts three rows of four long-lashed crying eyes against a brick wall backdrop. The quintessential Surrealist, Dalí often depicted eyes in his painting, sculpture, and fashion (especially jewelry) as both a symbol for the act of perception and as an allusion, and to promote a new way of seeing. The painting’s provenance traces back to Marques Jorge de Cuevas, who owned another similar work by Dali – the 15-foot-wide Yeux Fleuris, a 1931 tempera and oil on canvas that was used on the set for Mad Tristan, a 1944 ballet.

The present work was painted by Salvador Dalí during a nationally televised appearance on “At Home with Tex & Jinx,” a pioneering talk show that combined news, celebrity interviews and household tips. Dalí gave this painting to the show's glamorous hosts after the production, and it has remained in their family's collection. Illustrating the artist's expressive and abstracted signature rendered in his favored rich red tone, this work underscores Dalí's significance as not only a major Surrealist painter, but an early proponent of abstraction.

Farm House at Essex, a watercolor from 1929, is a masterwork by Edward Hopper. Created in the same year as Chop Suey, the record-setting painting that sold at auction in November 2018 for $91.9 million, this piece presents a quiet scene from a New England coastal town. Hopperâ&#x20AC;&#x2122;s depiction of a solitary house in a landscape devoid of people exemplifies the sense of stillness that made him one of the most important painters of twentieth-century American art.

Tom Wesselmann was a painter, considered a Pop artist, though he never agreed with the label. He was best known for his Great American Nude series in which his female figures were reduced to their erogenous zones. He would omit the face and most individualistic characteristics, in a way that he hoped would â&#x20AC;&#x153;make figurative art as exciting as abstract art.â&#x20AC;? It was thought that he made voyeurism and the ideal female form into a consumer product through his work.

Henry Moore, a father of Modern British sculpture, is known for his large-scale, semi-abstract sculptures in bronze and marble. Influenced by such wide-ranging artistic traditions as Surrealism, Classical, PreColumbian, and African art, Moore is best-known for his abstracted representations of the supine human figure and mother-and-child groups. This 1960 bronze sculpture of two seated figures demonstrates Mooreâ&#x20AC;&#x2122;s gestural treatment of material. The focus on family groups is reflective of the artistâ&#x20AC;&#x2122;s move toward a sense of optimism after World War II. Small sculptures like this one are rare, and in subject matter and composition are reminiscent of his earlier seated figures based upon ancient Egyptian royal sculpture.

Pascin Pig Passin Time is part of Scnabel's broken plate series of paintings. Inspired by the trencadĂ­s (or broken tile mosaic) of architect Antoni GaudĂ­ when he traveled through Europe including Barcelona in 1978, this series of works brought theatricality and process back to mainstream painting. With a humorous title and depicting his first wife, Jacqueline Beaurang, the broken ceramics give Schnabel an assertive and textural surface in which to create large-scale works that captured the brash and audacious period of the 1980s.

When Anselm Kiefer traveled to India in the early 1990s, he observed towers of brick that reached toward the sky. Essential to the manufacturing of mudbrick, the same bricks being fired within the towers were used to build them up. In a process of creation and destruction, the towering structures were then gradually dismantled as bricks were needed for construction elsewhere. Fascinated by the metaphorical resonance of this cycle of birth and decay, Kiefer’s work adopted the imagery of grand architectural constructions, monuments to ambition and its collapse. It recalls early civilizations in ancient Mesopotamia and reflects Kiefer’s own history growing up in Germany in the aftermath of World War II. In this mixed media piece from 2008, The Fertile Crescent, Kiefer incorporates thick layers of heavy texture that crackle like the dry bed of a once vital river. This specific tower imagery is drawn from Kiefer’s The Seven Heavenly Palaces, a large-scale installation first conceived at his sprawling studio at Barjac in the South of France.