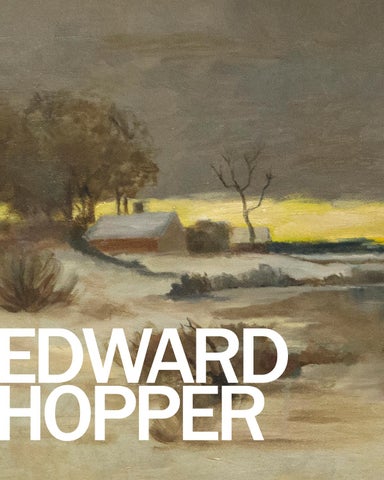 A Reason to Paint By Carole Perry

Edward Hopper (1882-1967) once said, “If you could say it in words, there’d be no reason to paint.” As a man of few words, Hopper certainly had a reason to paint. He articulated his worldview though his signature themes, from isolated figures in public or private interiors to sun-soaked architecture and deserted streets to boats and coastal scenes. Born in the Hudson River village of Nyack, NY, about 21 miles north of New York City, Hopper’s artistic ambitions surfaced early on. With a clear view of the river from his bedroom window, inspiration was close at hand. At the time, the river at Nyack was a thriving hub of transit and industry. The local shipbuilding companies in particular captivated the young artist-inthe-making and he would spend his days at the docks, sketchbook in hand, observing the activities and drawing. These early years are documented in dozens drawings of boats and ships as well as several wooden model boats. He recorded many other childhood interests as well, including trains, horses, soldiers, naval battles and characters from his books. Hopper’s interest in cultural activities also fueled his artistic development. His

parents were comfortably middle class and they exposed him and his older sister Marion to theatre, concerts, and literature in addition to fine arts. His mother, also imbued with artistic talent, encouraged her son’s creativity and kept him supplied with art materials and training manuals. After high school, he commuted by train to the New York School of Illustrating in Manhattan, but soon transferred to the New York School of Art. There he studied with the venerable William Merritt Chase and with Robert Henri, who encouraged his students to depict the more common, everyday side of daily life in their work. Following art school, artistic success was slow in coming and Hopper reluctantly worked as an illustrator for nearly 20 years until his painting career finally took off. During that time he travelled to Paris and other European cities, sold his first painting (Sailing at the seminal 1913 Armory show), and, in 1915, took up printmaking, producing some 70 etchings and dry points over the next decade. A turning point in his career came in 1923 when, at 41 years old, he reconnected with fellow artist Josephine (Jo) Nivison Hopper, whom he had met years earlier as an art student of Robert Henri. Jo suggested he participate with her in an exhibition at the Brooklyn Museum. Hopper exhibited six watercolors in the show, including The Mansard Roof (1923), which the museum purchased for $100. They married the following year, and from then on Jo was his

primary model and most ardent supporter. That same year he had an exhibition of watercolors at the Frank K. M. Rehn Gallery, which sold out. Recognition and sales continued and he was soon able to give up illustrating for good. The Hopper marriage was one of contradictions. She was outgoing and vivacious, he introverted and reticent. Despite their deep connection and 43 years together, strife and resentment were hallmarks of their union. The jealousy he felt for her cat, Arthur, inspired a caricature titled “Status Quo,” which depicts Arthur dining at the table with Jo, while an emaciated Ed grovels at their feet. Hopper regularly expressed his frustration with his wife by creating these caricatures and leaving them around their apartment for her to find. Of course, he never meant for these drawings to be shown to the public, but they provide important insight into the dynamics of their marriage and by extension, his depiction of women and relationships in his paintings. In the latter part of his career (except when travelling), Hopper only painted in his studio, rather than outdoors from nature, as he had done with the watercolors and some early oils. In the studio, he would work out his compositions through numerous study sketches, improvising with each incarnation, so that the original subject had evolved in step with this imagination. His lifelong quest to create great art hinged on being able to put more of himself—what he called his “inner life” --on the canvas and in this way, he felt