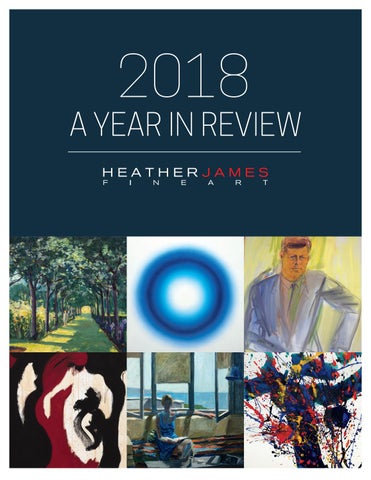 This past year marked a tremendous period of growth with the opening of our fourth gallery, Heather James Fine Art, San Francisco, ground breaking on our new space in Montecito, and the addition of many new team members. Exhibitions at our galleries included The Paintings of Sir Winston Churchill, de Kooning x de Kooning and Sam Francis: From Dusk to Dawn. We also secured several major works of art this year. As part of our ongoing commitment to support our local communities, our galleries hosted a number of online art auctions benefiting non-profits ranging from the National Museum of Wildlife Art to the Eisenhower Medical Center Foundation. This year, we look forward to opening of our fifth gallery, Heather James Fine Art, Montecito, to continue collaborating with our clients, and to presenting thought-provoking exhibitions on individual artists and art movements that deserve a closer look. James Carona & Heather Sacre Founders, Heather James Fine Art

We opened our fourth gallery located in the historic 49 Geary Street fine art building. Richard Kolosky heads the team of fine art specialists with deep ties to the Bay Area and its arts community. Our inaugural summer programming included hosting a series of gallery and private club receptions in conjunction with the Churchill exhibition featuring Churchillâ&#x20AC;&#x2122;s greatgrandson, Duncan Sandys.

Sam Francis: From Dusk to Dawn, a mini-retrospective of the artistâ&#x20AC;&#x2122;s seminal abstract expressionist works is currently on view through April 28, 2019. Highlights include A Whirling Square (1975), on exhibition for the first time in over 20 years from the private collection of Francisâ&#x20AC;&#x2122;s daughter, Kayo Francis Malik.

From the Collection of Kaare Berntsen, Oslo, Norway

The first show in many years to feature works by both Willem and Elaine de Kooning, de Kooning x de Kooning on exhibition through February 28, 2019, features many works from the private collections of family and friends. The selection of paintings, works on paper, and photographs provide an intimate portrait of the relationship shared by two major 20th- century artists with one another and with the canvas. Our accompanying exhibition video features artist Yvonne Jacquette, Rudy Burckhardtâ&#x20AC;&#x2122;s widow, and art critic Amei Wallach sharing their insights about the de Koonings.

To commemorate the Herb Alpert: A Visual Melody exhibition, we hosted 400+ attendees to a special live concert at Center For the Arts, featuring Alpert with Lani Hall. During the summer season, the gallery organized the Andy Warhol: Cowboys & Indians exhibition, showcasing for the first time the full set of 10 screen prints created by Warhol in 1986. The artist combined the set of portraits of well-known American “heroes” – John Wayne, Annie Oakley, Teddy Roosevelt, and General George Custer – with Native American images and motifs to form an ironic commentary on Americans’ collective mythologizing of the historic West. In addition to hosting the touring exhibition; The Paintings of Winston Churchill, several paintings and sketches by Elaine de Kooning were also on view this past summer.

Our travelling exhibition presented landscapes from the Estate of Julian Sandy’s painted by the famed statesman from the 1920s to the 1940s. The accompanying exhibitions programming in Palm Desert, San Francisco, and Jackson Hole included gallery-hosted lectures by Churchill’s great grandson, Duncan Sandys.

We organized exhibitions in Palm Desert, Jackson Hole, and New York of paintings and sculptures by acclaimed musician and artist Herb Alpert, accompanied by concerts with Alpert and wife Lani Hall.

Simultaneously taking place at both our Palm Desert and San Francisco galleries this past summer, the exhibition surveyed the stateâ&#x20AC;&#x2122;s seminal art movements from 1945 to the present. Selections of paintings and sculpture by leading figurative and abstract artists from both regions included works by Richard Diebenkorn, Ed Moses, Manuel Neri, Ed Ruscha, and Wayne Thiebaud, among others.

MONTECITO GALLERY OPENING We are excited to begin the winter season with the February opening our fifth gallery, located at 1298 Coast Village Rd. in Montecito, CA. Inaugural exhibitions will include works by influential Southern California artists and artists inspired by the beauty of the region.

The Female Gaze: Women Surrealists in the Americas and Europe will be presented at the New York gallery from May 7 to June 31, 2019. Organized geographically with works spanning from the 1950s to the 1980s, the exhibition reframes the history of Surrealism by focusing exclusively on the pivotal role played by women. Selections include works by Leonora Carrington, Leonor Fini, and Juanita M. Guccione, among others. We Were Always Here: The Art of Japanese-Americans will be on view in San Francisco from April 4 to July 15 2019. Focusing on cross-cultural artistic dialogues, the exhibition includes works by boundary-pushing contemporary artists including Yayoi Kusama and Yoko Ono as well as artists who have only recently gained institutional recognition.