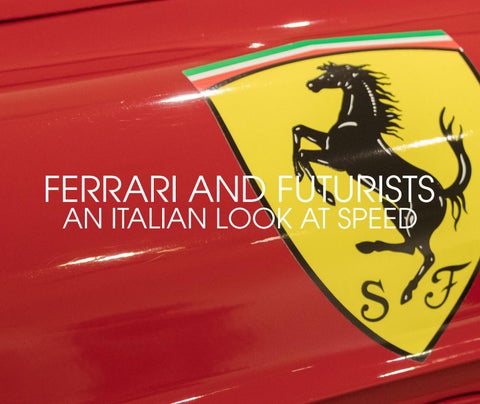 “We want to sing about the love of danger, ab common, daily practice. Courage, boldness an our poetry.” “We affirm that the world’s magnificence has of speed. A racing car whose hood is adorned Victory of Samothrace. “ Filippo Tommaso Marinetti, from “The Founding and Manifesto of Futurism”

bout the use of energy and recklessness as a nd rebellion will be the essential elements of been enriched by a new beauty: the beauty with great pipes... is more beautiful than the

The attraction the Futurists had for all things mechanical, powerful and fast certainly could be seen in the creations of a brand that has arguably the very definition of speed and beauty: Ferrari. It is hardly a stretch to make the connection- this Italian artistic movement began with the 1909 manifesto of Marinetti, a poet and editor, and quickly embraced the vigor, power, imagination and, above all else, the speed represented by machines and how they reflected a truly ‘modern’ life. Primary among those new machines transporting us into a new era was the automobile- and while all cars, even touring cars and family conveyances, were a leap forward, it was the race car- uncompromising and brutal, held barely in check by bold heroes at speeds scarcely imaginable only a decade before. So we naturally come to Ferrari. Born to conquer in the high-risk, demanding world of competitive motorsport, Ferrari has always represented the pinnacle in achievement. For the brave and talented men (and women) who drove them during the late 1940s and through the 1950s in races that today would be unimaginably grueling and dangerous, to conquer and win in a Ferrari was a real accomplishment. Enzo Ferrari himself was relatively indifferent to the demands of the drivers of his cars, whether he was paying them to race for his team or if they had spent a vast sum of money to buy one from him to run themselves. If a driver succeeded in a Ferrari, the car had done the

work- if the car didn’t win or failed during the attempt, obviously it was the driver’s fault for not getting the best out of it. Ironically, considering how many Ferrari cars are among the most beautiful vehicles ever made, Enzo had a notorious disdain for the way his cars looked. Two famous quotes illustrate the point: “Race cars are neither beautiful nor ugly. They become beautiful when they win.” And, “Aerodynamics are for people who can’t build engines.” For the man, it was all about what powered his carsanother quote-“I build engines and attach wheels to them.” But he was also keenly aware of the inspiration his creation inspired in people- whether it was something realizable or purely aspirational- “The Ferrari is a dream—people dream of owning this special vehicle and for most people it will remain a dream apart from those lucky few.” The first vehicle to bear the name Ferrari was built in 1947. Enzo Ferrari had begun his career in motorsport as a driver in 1919, subsequently moving into team management with Alfa Romeo in 1925. As was the practice for decades in the luxury and sporting sectors of the automotive market, Ferrari supplied only chassis- with suspension, wheels, engine, transmission, rear axle and exhaust- to purchasers. The body was ordered from and built by independent shops,

carrozzerie in Italian. The client paid the carrozzeria a price above that paid to Ferrari for the mechanical portions of the car. Each car was hand-built and while a few may have shared a basic shape, each had differences, small and large. No two were exactly the same. Sometimes a carrozzeria would order a chassis to body for display at a motor show to advertise their capabilities in order to attract clients. Carrozzeria Touring of Milan had a very close association with Ferrari in its earliest days, having designed and built the body for a very successful open racing car, the 166 S. With this model, nicknamed ‘barchetta’ or little boat, Ferrari won the Mille Miglia and the Le Mans 24 Hours, firmly establishing his cars as the ones you wanted if you had a desire to win. The styling of the 166 Barchetta quickly became a classic – the clean, flowing, simple lines inspired the AC Ace sports car of 1953 which later became the basis for the Shelby Cobra. In this exhibition you will see how, from that seminal model of 1949, the next decade and a half would see Ferrari bring forth some of the most beautiful, captivating and exciting cars ever to grace the road.

The 166 Inter was the first Ferrari produced for the road, a vehicle built to finance the racing operations that were the heart of the company. With the success of the 166S and 166MM in competition, most notably with the 1948 Mille Miglia win by Clementi Biondetti and Luigi Chinettiâ&#x20AC;&#x2122;s epic 1949 LeMans win, the reputation of Ferrari drew the attention of a well-to-do clientele.

The classic, simple, elegant and well-detailed bodies Touring fitted on Ferrari chassis beautifully capture the combination of lightness and strength that these cars possess. Their lines reflect the kind of continuous motion so prized by the futurists- the sculpted metal seems to have been shaped by the wind as it passes over the car, even when sitting still.

They had no real desire to test their skills in a race, but didnâ&#x20AC;&#x2122;t mind driving a car in town that made others think of the daring exploits of competition drivers. While many coachbuilders clothed Ferrari race and road cars in the early years of the firm, the company that was most closely identified with its products was Carrozzeria Touring of Milan.

Although not intended to be a competition car, owners occasionally used them in anger, mostly in hill climb and regional events. This example has been used in vintage racing events by previous owners from the 1980s through 2008 in the USA and the UK.

The USA has always been a central market for Ferrari. It was US importer and Ferrari racer Luigi Chinetti who ensured that Ferrari became a manufacturer when he guaranteed Enzo that he would buy 20 cars to sell in North America. Whether for customers purchasing competition cars or distinctive sports cars for the road, the wealth to be tapped across the Atlantic Ocean was a strong lure for Enzo Ferrari. With both the demands of the types of circuits in America and the long distances to be covered on the road, Ferrari often found that a larger displacement engine was more suited to conditions here. Many races in the 1950s were held on improvised circuits at airports. They often combined long straights with slow corners, giving an advantage to cars with abundant low-range torque. The models with the largest engines were given the name ‘America’ for this very reason. They were also quite effective in the long-distance ‘over the road’ events such as the Carrera Panamericana race in Mexico,

which covered the length of the country from south to north at top speed on the then-new Pan-American Highway, the Mille Miglia in Italy, a dash from Brescia in Northern Italy down to Rome and back, and the 24 Hours of LeMans in France. While 23 examples of the 340 America were made, this particular car is one of two coupes built by Carrozzeria Touring with its typical extremely lightweight bodywork. This is a Spartan, working toolno lining or padding on the door panels, interior roof, or floors and Plexiglas windows. Weight is the enemy and has been banished. This is truly an example of what the futurists celebrated- a machine for winning: strong, powerful, fast, unforgiving and certainly a bit dangerous. This car has been run several times in the Mille Miglia Storica, the modern rally version of the legendary speed event held twenty-four times between 1927 to 1957.

The Ferrari 250 GT was the first Ferrari model planned for and built in ‘production’ series. Following the premier of the Pinin Farina designed and built prototype at the 1956 Turin Auto Show, 140 examples of the coupe were built by Carrozzeria Boano and Carrozzeria Ellena in a twoyear run. While this number certainly is small by any consideration, it must be seen within its context: from 1947 until 1955 Ferrari had only built 215 street cars in total. This 250 GT, however is not one of those ‘production’ models, but rather a very special variation. Following the assignment of 250 GT production to Boano, four chassis were delivered to Pinin Farina for special bodywork. Designed in the style of the larger-engined Ferrari 410 Superamerica on a short wheelbase chassis, these examples show many small unique custom details. Here we see the transformation of Ferrari from a builder of unforgiving competition cars and nattily dressed quasi boulevardiers to the creator

of true dual-purpose vehicles- elegant enough for the opera while still fast enough to be a threat in a race. No longer is it necessary to make sacrifices in comfort for speed. The first owner of this special 250 GT was Emanuele Nasi, a director of Fiat who was also the grandson of Giovanni Agnelli, one of the founders of Fiat. He specified the subtle and elegant color scheme of Gentian Blue with black roof and tan leather. After Nasi sold the car in 1959, it passed through owners in Switzerland and Germany, one of whom ran the car at the famed Nürburgring racetrack in the late 1960’s. Brought to the USA in 1969, it was later given a comprehensive restoration completed in 1992. Since then it has won numerous awards at the highest level, including Best in Class at the 1992 Pebble Beach Concours d’Elegance® and several top trophies at national Ferrari events through until 2012.

A part of the ‘America’ series of large-engined Ferrari GT cars, the Superamerica epitomizes the very special customer at which these vehicles were aimed. It was preceded by the 410 Superamerica of 19551959, of which 35 individually styled custom-built examples were built. This model firmly placed Ferrari in the world of the super-expensive fast luxury GT. When the 400 Superamerica was introduced in 1959 it came with a dramatic, sleek but muscular coupe body called the ‘Coupe Aerodinamico.’ 32 of the 47 built of this model carried this coachwork, all with some slight variations in details. The 400 Superamerica can achieve 100mph from rest in just over 17 seconds, all in great comfort and carrying luggage for a week on the road. As was the case with its predecessor, it was costly- $17,800 in 1963. No surprise that the original owners were among the wealthiest and most important people in the world. This example was purchased new by

Nelson Rockefeller, a well-known lover of fast and luxurious cars. He ordered the car in silver, but much to his surprise found it delivered in a deep red instead. He had the new car re-sprayed to his first color choice, which it retained for many years. While it might seem a world removed, the Superamerica brings together all the attributes seen in the 166, 340 and 250 in a more total package. Functionally aerodynamic, with coachwork that effectively communicates the capabilities of speed and power but delivering them in a way that almost, just almost, makes it seem effortless. More recently restored to the original factory color of Amaranto, it was the recipient of a Best in Class award 2011 at The Quail, a Motorsports Gathering in Carmel Valley, CA.

Curator of the show, Donald Osborne, carries an Accredited Senior Appraiser (ASA) designation of the American Society of Appraisers and is recognized by leading collectors, institutions and organizations in the United States, UK and Europe for his expertise in the inspection, evaluation, valuation, purchase and sale of vintage Italian, French, German, British, and American cars. He has shared his considerable knowledge and experience with millions of viewers on television in his regular feature on the CNBC Primetime show “Jay Leno’s Garage.”