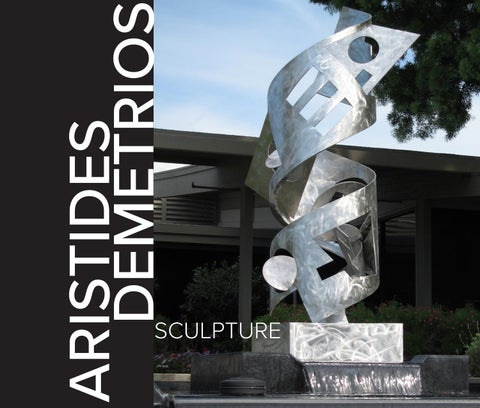 Aristides Burton Demetrios was born and raised in Massachusetts. His father, George Demetrios, was a classical sculptor, trained by Bourdelle, a student of Rodin. His mother, Virginia Lee Burton, was the renowned author and illustrator of children’s books, including Mike Mulligan and His Steam Shovel, and The Little House, for which she won the prestigious Caldecott prize. After graduating from Harvard College, Aris spent three years as an officer in the Navy before heading to California to pursue graduate courses in architecture at UC Berkeley. In 1963, he won his first national sculpture competition when his proposed design was selected for a major fountain commission on the campus of Stanford University (The White Memorial Fountain: “Mem Claw”). Shortly thereafter, he was chosen to be the sculptor for a public art commission in Sacramento in front of the County Courthouse; subsequently, he was selected by David and Lucille Packard to design and fabricate the sculpture to grace the entry to the Monterey Bay Aquarium (Forms Sung In A Kelp Forest). After successfully completing a series of monumental public sculptures (The 92’ Wind Harp in South San Francisco; The Bataan War Memorial on the Island of Corregidor, Flame of Freedom; the 80’ sculpture Cosmos; the fountain Peirine in New York; Breakthrough, The Deineger Fountain at the University of Southern California; sculpture installed at the University of California, San Francisco, among others) Demetrios turned his attention to smaller works for private collectors. In the last few decades, he has designed, fabricated and installed a large number of commissioned works for the gardens of private collectors, including a great many bronze fountains. In addition, he has had several gallery and museum shows featuring his figurative bronze sculptures, like Trixter, his abstract bronze sculptures, like The Cube, and his painted or patinaed steel sculptures, like Tomorrow’s Dreams, the vast majority of which are now owned by private collectors across the United States.

In 2002, Demetrios won the “Santa Barbara Beautiful Award” for the most beautiful work of public art; the award recognized Demetrios for the design and fabrication of the 18’ bronze fountain, Mentors, which serves as the focal point of the Santa Barbara City College, overlooking the Pacific Ocean. The fountain was donated to the campus by Eli Luria and Michael Towbes, two revered Santa Barbara philanthropists, both of whom have Demetrios’ sculptures in their own private collections. He was once again awarded the “Santa Barbara Beautiful Award” in 2018 for Dance of Life, installed at the Ridley Tree Cancer Center. Demetrios, who goes by the name Aris, shows his work in several galleries, and in his studio in Montecito, California, where he resides with his wife Ilene.

FORMS SUNG IN A KELP FOREST