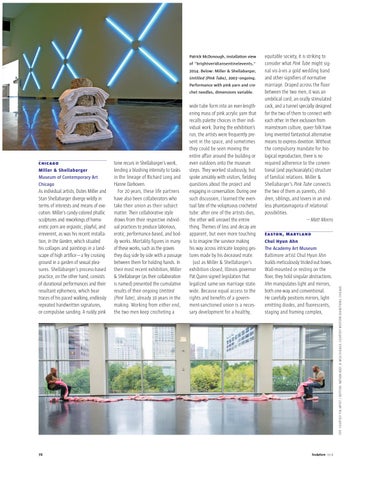 tone recurs in Shellabarger’s work, lending a blushing intensity to tasks in the lineage of Richard Long and Hanne Darboven. For 20 years, these life partners have also been collaborators who take their union as their subject matter. Their collaborative style draws from their respective individual practices to produce laborious, erotic, performance-based, and bodily works. Mortality figures in many of these works, such as the graves they dug side by side with a passage between them for holding hands. In their most recent exhibition, Miller & Shellabarger (as their collaboration is named) presented the cumulative results of their ongoing Untitled (Pink Tube), already 10 years in the making. Working from either end, the two men keep crocheting a

wide tube form into an ever-lengthening mass of pink acrylic yarn that recalls palette choices in their individual work. During the exhibition’s run, the artists were frequently present in the space, and sometimes they could be seen moving the entire affair around the building or even outdoors onto the museum steps. They worked studiously, but spoke amiably with visitors, fielding questions about the project and engaging in conversation. During one such discussion, I learned the eventual fate of the voluptuous crocheted tube: after one of the artists dies, the other will unravel the entire thing. Themes of loss and decay are apparent, but even more touching is to imagine the survivor making his way across intricate looping gestures made by his deceased mate. Just as Miller & Shellabarger’s exhibition closed, Illinois governor Pat Quinn signed legislation that legalized same-sex marriage statewide. Because equal access to the rights and benefits of a government-sanctioned union is a necessary development for a healthy,

equitable society, it is striking to consider what Pink Tube might signal vis-à-vis a gold wedding band and other signifiers of normative marriage. Draped across the floor between the two men, it was an umbilical cord, an orally stimulated cock, and a tunnel specially designed for the two of them to connect with each other. In their exclusion from mainstream culture, queer folk have long invented fantastical alternative means to express devotion. Without the compulsory mandate for biological reproduction, there is no required adherence to the conventional (and psychoanalytic) structure of familial relations. Miller & Shellabarger’s Pink Tube connects the two of them as parents, children, siblings, and lovers in an endless phantasmagoria of relational possibilities. —Matt Morris E , M  