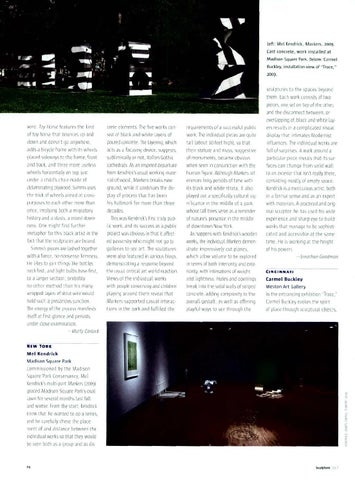 sculptures to the spaces beyond them. Each work consists of two pieces, one set on top of the other, and the disconnect between, or wire. Toy Horse features the kind of toy horse that bounces up and down and doesn't go anywhere, adds a bicycle frame with its wheels placed sideways to the frame, front and back, and three more useless wheels horizontally on top, just under a child's chair made of delaminating plywood. Simms uses the trick of wheels ained at crosspurposes to each other more than once, implying both a migratory history and a stasis, a mired-downness. One might find further metaphor for this black artist in the fact that the sculptures are bound Simms's pieces are lashed together with a fierce, no-nonsense firmness He likes to loin things like bottles neck-first, and light bulbs base-first, to a larger section, probably no other method than his many wrapped layers of stout wire would hold such a precarious junction. The energy of the process manifests

crete elements. The five works consist of black and white layers of poured concrete. The layering, which acts as a focusing device, suggests, subliminatiy or not, Italan Gothic cathedrals. As an inspired departure from Kendrick's usual working mate iat of wood, Markers breaks new ground, while it continues the dis play of process that has been his hallmark for more than three decades This was Kendrick's first truly public work, and its success as a public project was obvious inthat it affected passersby who might not go to galleries to see art. The sculptures were also featured in various b[ogs, demonstrating a response beyond the usual critical art world reaction. Views of the individual works with people conversing and children playing around them reveal that Morkers supported casual interactions in the park and fulfilled the

requirements of a successful public work. The individual pieces are quite tall (about io feet high), so that their stature and mass, suggestive of monuments, became obvious when seen in conjunction with the human figure, Although Morkets ref-

overlapping of, black and white layers results in a complicated visual display that intimates Modernist influences. The individual works are full of surprises. Awalk around a particular piece reveals that its sur-

erences long periods of time with its black and white strata, it also

faces can change from solid wall to an exterior that isn't really there, consisting mostly of empty space. Kendrick is a meticulous artist, both

whose tall trees serve as a reminder

inal sculptor, he has used his wide experience and sharp eye to build works that manage to be sophisti-

of nature's presence in the middle of downtown New York. As happens with Kendrick's wooden works, the individual Markers demonstrate impressively cut planes. which allow volume to be explored in terms of both interiority and exteriority, with intimations of weight

cated and accessible at the same time. He is working at the height of his powers. Jonothon Goodman CINCINNATI

and lightness. Holes and openings break into the solid walls of striped

concrete, adding complexity to the overall gestalt, as well as offering

In the entrancing exhibition 'Trace,' Carmel Buckley evokes the spirit

playful ways to see through the

of place through sculptural objects,

itself at first glance and persists under close examination. Morty Corlock NEW YORK

drawings, 01onolypes, and video. By using objects ind qualities discov preld it a house and surrounding woodls to whli[h site recently relo it'ed,Buckley set forth a project as ,in arlM (unn arihaeologst. Rather ihan trying to re create the entire evirornment, sie offers a series of ,diosyicrati( tragnients that blend the pla(e to which she refers and ito' place n which the viewer eni((unite' her work. Two videos of tree foliage with a soundtrack of the early morning breeze and birdsong are all that is needed to evoke a tairy tale forest. The psychological tone of these layered, partial spaces is palpable the exhibition evades onumesis, offering a series of works that are lirt of all thernselves, only fUrther radiated by the hronorific "artn"Buck ley is a con(eptual artist insofar as a large poilion of her creative manipulation of the recovered objects takes pla(e in ilte mind and eye Her deft and controlled placement and organzation of mostly unaltered (and thereby unharmed) objects man ages to inihRIC then) with intent To take a thing that has been at home

become so involved with humble matters of reality that one finds poetic or transcendent attributes that were there to begin with. The prints inthe exhibition also operate as found objects in that they are impressions of different materials from the artist's life. Window screens and fly swatters have been inked with a mother of-pearl shade, resulting in pale, hauntingly minimal traces. In another, grass-green print, a fabric embossed with leafy patterns testifies to the artist's hunt. The texture becomes alI the more suggestive of the outdoors in such a color. The spiritualized tone is summarized ina pair of five-gallon plastic buckets, overturned and fitted with fragments of rusted metal buckets. Like the other works, this piece is left untitled, inviting viewers to invent and intuit an explanation. As iconic and austere as high Minimalism, these twin forms are augmented by their unknown but apparent history, broken in by time and use. -Matthew Morris

it one totation and simply display it

"State of the Union: Contemporary Craft in Dialogue"

a historiial precedent that is ntof retalled in Buckley's approach. fe sensed Rather, what might as the displacement of these forms, smt f as the green too shed uprooted from the artist's back yard and installed in the space, is addressed through tempered whimsy. The shed, for instance, is presented atop ioil paper(,td cinder blohiks that glow heneatif its rickety structure. Many OfBuckley's alterations are alnioisi idden, such as golden thread wrapped delicately around areas of wire caging or the replace ient of a broken area in a wooden basket with similarly colored and patterned paper. Buckley attaches i nagi it t htediscovery process, to hind these minute details is to

Philadelphia Arts Alliance "People often talk as if there was

an opposition between what is beautiful and what is useful:' Oscar Wilde's summary of the debate between craft and fine art still rings true, even as definitions are con stanfly redefined and artists blur the remaining lines between the fields. "State of the Union," which sought to comment on the dialogue that connects art, design, and craft,

also attempted to demonstrate (inthe words of curator Melissa Caldwell) that "craft has the poten tial of questioning the boundaries of its own conventions, even more so than other fields of contempo rary art'"

Many featured artists address the question of utility incraft, especially form dictated by function. In a ///,V, series of spoons, Fideiity f, f1, and V(2oo6-08). Haley Bates modi ties each form slightly, rendering her sleek modern designs useless and questioning how utdity defines certain objects. Bates's Dissection (2005) offers another example of how perceptions of an object can be changed by small adjustments. Starting with a spoon, she eliminates one aspect of its form in each successive iteration, until it is reduced to a teardrop outline. Gord Peteran's A Table Mode of Wood (1999), a clever comment on what constitutes a table, is made of numerous individual pieces of wood,

including the handle of a paint brush. He focuses on the mnateriat rather than the object so that the viewer notices the wood first. Peteran's table may serve the ftamil iar function, but lie takes the focus away from utility Decoration faces the opposite cri tique, being merely pretty. For A Thousand Tiny Deaths (2009), Jeanne Quinn inflated approximately 50 balloons inside black vases and then suspended them from the ceiling. As the balloons slowly deflated, the vases dropped, crashing into pieces on a platform below, Quinr creates movemnent and anticipation in an object considered static, theatrically contrasting the perma nence of classical forms with the