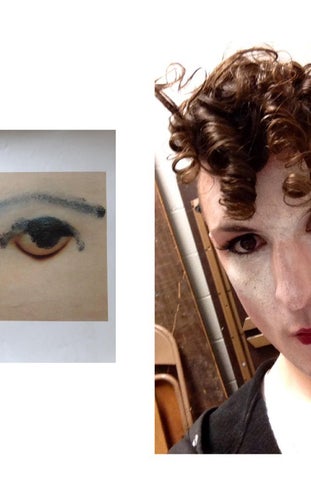 Claims: 1. The epistemologies typically attributed to an analysis of the material conditions of an artwork’s production are almost always available through a phenomenological encounter with the art object itself. 2. Black is back. 3. There is a space beyond explicit depictions of same-sex coital encounters where eroticism and desire take other forms. Overturn anything and you’re bound to find sex. 4. For a period of time in the late 1950s, Agnes Martin and Ellsworth Kelly’s studios adjoined one another, and on most mornings they breakfasted together. This matters. 5. Coalitions across lines of difference are preferable to the eradication of nuanced subject positions. 6. Codes, closets, and separatism continue to be useful both as historical points of reference, but also as formal moves of constraint to play against the limits of painting.

This exhibition marks the completion of the first iteration of ‘Painting Queer,’ an undergraduate multi-level studio course at the School of the Art Institute of Chicago. 3

Holding Environments All of them were being friendly, with warm smiles and measured tones as their speculations built up to questions aiming to gather what it is that one does in painting that is queer a priori. We were sitting around eating lunch, and all of us were male identified and all of us were white, American, educated. And all of us had grey hair, though mine was from a recent bleach and toner job, professorial drag, maybe also a stylistic expression of what Richard had called “pedagogerasty.” Is this Identity Politics, again? Wouldn’t that be essentialist? Tacitly, are you really corralling off a territory in the traditions and conventions of painting that only gay people use/should use/can use? How is ‘queer’ detected, and what is connoted from those detections? Even now, a paranoid public reads a body and corresponds its rococo body language with nonnormative sex performed elsewhere. Swishy, light in his loafers, bats for the other team: curlicues, arabesques, broken circles of movement. These lines of beauty play out as failures, setting off imaginaries like sparklers illuminating butt sex, double headed dildos, reversed gender roleplay. A limp wrist, a swayed hip, a squared off shoulder on the ‘wrong’ body are public reminders of the fragility of social constructs, still. Still! The exterior frame of the class was being read likewise: what goes on inside that room, behind those closed doors? They told me what they understood from the flyer for the class, which featured an artwork Alex da Corte had produced with Sean Robert Fitzgerald and named after Deleuze and Guattari. They had pored over an interview I’d done with another queer art world denizen for a local bi-weekly paper. In the text, several lines from our conversation had been mashed together into a claim about queer painting: Queer formalism privileges the painting’s backside; it troubles how the margins relate to the center; it can have a panoply of strange symbols; there can be wonderful things from uninformed encounters. Ask half a dozen queer theorists to define queer, and they will all disagree. Queer always fragments. It doesn’t hold together. That’s what’s amazing and beautiful. It’s not monolithic. It asks us to restructure our 4

value systems. (Jason Foumberg, “Art Break: How to Make a Queer Painting,” NewCity Art Feb. 10, 2014) Our society is designed for subjects (or at least consumers), and to recant the positions that a presupposed subjecthood holds seems to expose marginalized individual lives to yet further encroaching hegemonic relations of power rippling out from the Center. But of course, subjectivity was likewise designed for that consumer society. If that wasn’t obvious, I’m not pressuring the existence of subjective qualities that articulate personhood, because they at least seem to behave as usable currency, but rather I want to better understand how they are constituted toward the end of hacking or reappropriating those structural moves so that content can be invested not only in the containers/subjects designed by regulatory power systems within which we circulate, but also inscribed across the apparatuses around, beneath, behind those legible bodies. If as one might come to presume after reading Butler, Foucault, Barthes, Derrida, Wittig, Johnson (who have all informed Painting Queer) that what we call subjectivity is actually constituted relationally and/or compulsively and/or as much through exterior forces and hails as from some soulish interior, then a complex and rewarding text about power, identity, pleasure, desire, failure, and disappointment is embedded in a surface’s relationship to its underlying body. This then, seems to be why an investigation of these problems might be productively explored in painting. Painting-as-container, a trope held by many painters from many historic and contemporary moments, stands in the place where one problematizes the assumptions of a supposedly stable form. If, as my quotes from the aforementioned interview characterizes it, a queer theoretical project doesn’t (and doesn’t want to) hold together, but rather fragments, disperses, contradicts itself, then painting may seem to be perversely unhelpful as it historically wants to hold itself together. But this tension has proven, over the past several months of exploring our class, to be exquisite. To attempt to address both relevant (but often stubborn) concerns in painting and also the incoherent wilds of ‘queer’ simultaneously is to perform creatively as a coalition. 5

If a painting is a container, what is a painting class? Particularly one that accommodates student-artists at every level of experience (with painting, with close readings of critical texts)? One recalls the internal tumult of the Combahee River Collective as they conveyed the strife and conflict within their community in the April 1977 “A Black Feminist Statement.” Speaking across, let alone cooperating or supporting across lines of difference is not easy and that’s why it happens so rarely. Even in our first couple of week’s of class meetings, we were talking about camps within gay and queer culture, disidentifying with Boystown, and debating the functionality of a utopian urge to obliterate taxonomies and difference. Somewhere between painting-as-container and queer-as-dispersal, I returned to psychoanalyst Donald Winnicott’s “holding environment.” Painting Queer has been a holding environment. To claim this charges the responsibilities of pedagogy as something more therapeutic than I’d intended for it to be. Queer communities I navigate through have been talking a lot recently about creating “safe space” (I even follow a tumblr called This Is Not a Safe Space: http://thereisnosafespace.tumblr.com), and by many of these descriptions, I have not been attempting to make safe space for my students or for the artists in this exhibition. Rather, I take the task of facilitating a holding environment to mean that by establishing some unflappable constants, tough questions, taboo longings, incommensurate parts can hunt for ways to become manifest materially, or conceptually, or artistically. The exhibition postcard shows a painting by Florine Stettheimer, and title of this exhibition is a quote from Virginia Woolf’s Mrs. Dalloway. Stettheimer was a lesbian socialite who partied with (that is, hosted lavish parties for) Marcel Duchamp, Man Ray, and their intelligentsia. The titular line of text means one thing within Woolf’s novel and that meaning interests me, but I also relish what happens with the words out of context. As a frame for the show, it is a proposition for community, that when this same-sex duo meets up, terrible things happen, or perhaps they do terrible things together. Stettheimer’s salons and Woolf’s fictive relationship are here employed toward my pedagogical and curatorial conceits about a coalition community, one in which terrible and productive research may happen. 6

Miss Kilman and She Were Terrible Together and this accompanying zine test some of those claims of what a queer formalism is, as well as the claims listed in advance of this essay. The show and book are inspired to look behind tidy representations of same-sex desire, and as such, much of the exhibition is made from abstract or material investigations, with figuration included as thoughtful pivot points between more oblique (queer) gestures. As I curated, I was keeping in mind a strange, poetic problem that recurred over the semester around “matter,” both as substance and as significance, and wanted to bring forward, recall, and champion artistic moments that I feel matter in both respects. The layout and installation of the book and exhibition continues our critical investigations, as how works are oriented and how formal motifs (like circles or blackness) permute across different materials and in different places within Hills Esthetic Center’s space. We made more problems for ourselves, such as reconciling the scale of BD Pack’s large oil painting to the comparatively diminutive works by Ulrike Müller and Eric Ruschman hung nearby; Matthew Landry’s means of negotiating assumptions around discrete objet d’art through installations that aesthetically furbish their spatial contexts; and Poy Born’s poem that closes off this zine and runs vertically, asking the reader to twist the book sideways to engage with the text. I poked around at my salad and repaid the polite smiles that encased their probing inquiries about the class. I sat as a queen among Kings, and the very suggestion that painting mightn’t be accessible to all (or at least to het men) was playfully electric in the lounge. I wasn’t quite sure how to answer, and in my mind, I ran my fingers across the way I was being hailed, sensitive to the possibility that their questions already formed answers to neatly fit them. The identity and substance of the class may be as much scripted through these rumors and hypotheticals, as through the content of my syllabus and the interiors of my students’ working methods. What goes on inside a Painting Queer classroom? We are terrible together.

Essay by Matt Morris included in a zine accompanying his curatorial project 'Miss Kilman + She Were Terrible Together' at the Hills Esthetic...

Essay by Matt Morris included in a zine accompanying his curatorial project 'Miss Kilman + She Were Terrible Together' at the Hills Esthetic...