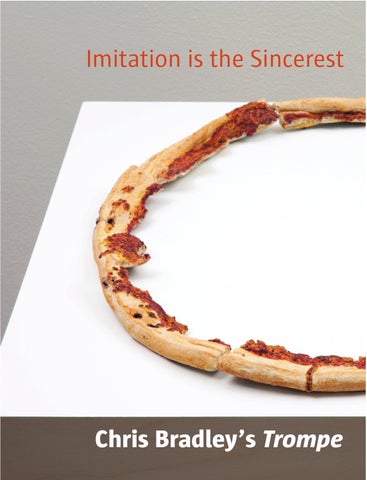 Imitation is the Sincerest

Chris Bradley, a Chicago-based sculptor, takes hold of one of the oldest drives in American art-making through studied simulations of various objects and materials. Successful trompe l’oeil not only seeks to convince viewers of a highly crafted imitation, but also requires a latent recognition of its falsity. At the end of the 18th century, Charles Willson Peale and other American painters developed dazzlingly detailed techniques that exerted a meticulously controlled grasp on reality. So keen were their empirical observations that their paintings occupy a space of meta-reality, wherein illusions stand convincingly alongside the objects on which they are based. But simulation has more than one intention, and the subsequent history of American art exploits them all. Warhol’s Brillo Boxes from the mid-1960s played simulation as critique, a send-up of illusory representation in art as well as a means to reduce art’s remove from life. Subsequently, imitation became a useful tool for undermining and questioning dominant regimes. Just as feminist theory began to articulate gender as failed mimicry, Vija Celmins was making studied replicas of objects from daily life, as in her 11 pairs of stones and painted bronze cast copies (To Fix the Image in Memory, 1977–82). And as queer theory called for a rejection of inherited social scripts that continued to reify categories of identity, Robert Gober’s impeccable sculptural installations showed how things are never as they appear, offering a sagely pluralist alternative to rigid norms. This turn to issues of gender is not insignificant in approaching Bradley’s practice, because his material fascinations can be read collectively as a contemplation of the conditions of manhood. Where does someone who is “just one of the guys” locate himself in the broadened vocabularies available for constructing identity today? Bradley’s works from the past several years conjure reckless sleepovers, blue-collar labor, and deeper, psychoanalytic takes on masculinity. Cast or constructed metal, plastic, and concrete forms receive delicately painted patinas to resemble the last

dregs of a farewell party for Western white straight masculinity. In its aftermath, Bradley is both cheerful and melancholic, succinctly attending to a sense of loss in works such as Crust Ring (2011), a life-size painted bronze zero made to look like the uneaten crusts of a large pizza. In a related series that Bradley calls “Grease Face,” steel and aluminum are formed and then painted to appear as empty pizza boxes stained with grease. Cast bronze pushpins take the place of beady eyes, and hubcap rings or band saw blades mark out the circular shape of a head. Bradley explains that “one way of dealing with some kind of ineptitude is to make fun of what you can’t do. In the early pizza boxes, I feel like I was jabbing at painting or portraiture.” He uses skills learned on the job with various work crews to eschew traditional representation, creating instead what appear as casual doodles composed from happenstance materials. Not unlike Willson Peale and other early American painters, Bradley aims for an easy look that belies the earnest, labored means of his production. The ineptitudes and jabs he speaks of directing toward traditions in portraiture could just as easily be considered with regard to acting “like a man.” Drag kings and adolescent boys alike know the practice involved in portraying the off-handedly confident and convincingly blasé stance required to look like (and therefore be, for all intents and purposes) a man. Sometimes Bradley’s faces are set into the gallery wall itself, without the mediation of the faux cardboard base. Tack Face (2011), for instance, reveals the try-and-try-again action of getting the right face from a row of cast pushpins for a mouth and two more for eyes. Around the knobby elements, the wall is marred with previous attempts at marking out the small grin. Like a snowman, the legibility of Bradley’s faces depends on several levels of socially agreed upon signs: cast bronze is recognizable as pushpins (or at other times, wads of chewing gum), and the pushpins are organized into simple facial features. A work in progress in Bradley’s studio is far less indirect. A charcoal drawing of a nude male figure is tacked to a drawing board, with an excess of cast pushpins driven into

the crotch. The drawing was made by a friend of Bradley’s, and he describes wanting to deface the figure. “In a way, it’s mutilating,” he says, both stating the obvious and leaving open the possible motives for such a charged assemblage. This symbolic castration conveys all the tragicomic pathos and anecdotal defeat that has come to be associated with contemporary masculinity through icons like the comedian Louis C.K. In his hilariously dejected storytelling, C.K. turns his male privilege on itself, beating others to the punch in an appealing paradox that uses the platforms availed to him to deflate his own self-importance.

By identifying himself as a ready target, the humorist becomes weirdly shielded from the critiques that follow his own. Targets and shields both figure among the forms that interest Bradley. His first solo exhibition with Shane Campbell Gallery featured a series of targets: sculptural assemblages had been set up as a ramshackle shooting gallery recalling the provisionally screwball constructions of Rachel Harrison and Isa Genzken. Beer cans and metal casts of potato chips and used paint rollers served as targets in an imaginary shoot out, held aloft on sawhorses, tripods, and other rudimentary structures.

Bradley explained to me how an element in Target #1 (2011) led to later work with shields: “One of the original targets has a piece of corrugated cardboard turned into some sort of mask. It has two eyeholes and stands on a peg. That was the impetus for the shield work: taking cardboard further to playfully block yourself with. Of course, cardboard is soft, and you could stab or shoot right through it. But not at a sleepover.” He made this last comment with a laugh, recoiling from more riotous scenes in which such body shields would be used and instead calling up the make-believe equivalent—sleepover warfare fought over snacks with pillows and makeshift armor. He began constructing faux cardboard shields in 2012, first out of sheets of steel and corrugated aluminum and then in cast pigmented concrete. In all of these works, the surfaces are shaped and colored to show signs of wear—physical manifestations of

the vulnerability that Bradley describes in his imagined playtime narrative. The most recent shields have the appearance of actively painted surfaces splattered and smudged with black and white. This “cardboard” seems to have been used in the studio to protect floor and table from excess dribbles, but it also reads as having been decorated with war paint. The studio practice is included not only as a means of production, but also as a topic within the work, wherein reproductions of studio leftovers and detritus are meticulously cast and painted to function as a protective barrier for the artist looking out at the world. Bradley has also been working on a series of keychains that hang off copies of his studio key, which is inserted into the gallery wall, as if presuming to unlock secrets of the art establishment. Taken together, the shields and keychains reveal the reticence that underlies Bradley’s choices. His propen-

sity is to set up everything one would need for a hilariously incisive joke, but he leaves the parts loose and open ended, reluctant to fix meanings because of what they might reveal. Comprehension of the shield sculptures depends on understanding that hard metal and concrete are perceived as a soft paper fiber; the tenderness of the material is only an affectation. Likewise, the enticement of access is left unfulfilled through Bradley’s circulation of keys that carry with them the possibility of admittance into his private workspace. The main event in the keychain works, though, is the cluster of other keys and ornaments that dangle heavily below. Every one of them has been rendered and constructed from anything but what it appears to be. Token (Palm 2) (2013) includes a 3Dprinted scan of an artifact from the collection of the Art Institute of Chicago. A muscular yet fragmented ruin of a male torso tapers down to the groin, before cutting off at the thighs. This could be read as another jab at historical conventions in art-making: taking a life-sized Roman marble torso and making it miniature and reproducible. But Bradley’s version also presents itself concretely as an art historical inheritance being taken up in the life and practice of an artist working today. What is this inheritance specifically? A man in ruins, dismembered but still celebrated. Bradley returns to dismemberment in his most recent works, a series of metal hand trucks that have been dissected and reassembled to shift them from functional, mobile tools into erect, austere monuments. These are not simulations but alterations of preexisting hardware. The wheels have been removed and the vertical bars moved to sit squarely atop the lift plate. These objects have been restructured from things that do to things that are. Though elsewhere the masculine is mutilated, shot off, or ruined, here Bradley makes proud phallic gestures. (One incarnation has been powder coated in a sensuous pink, a hue that he discovered on a hunt for “something fleshier.”) Here are all the hallmarks of conventionally masculine forms: rigid, vertical, stubborn, but also immobile, impaired, and with a more delicate surface than one has been conditioned to expect.

In Gender Trouble (1990), a now foundational text for debasing the hold of rigid gender systems, Judith Butler winds her way through the paradoxes by which masculine/feminine binaries have been constructed: “Because there is neither an ‘essence’ that gender expresses or externalizes nor an objective ideal to which gender aspires, and because gender is not a fact, the various acts of gender create the idea of gender, and without

those acts, there would be no gender at all. Gender is…instituted in an exterior space through a stylized repetition of acts.” How then are the furnishings and pastimes within the man cave of Bradley’s practice to be understood? If his imitations serve to simultaneously reconstitute and also undermine boyhood play, bachelor pad parties, and day labor, does the body of the man-child suggested by these artworks cohere or dis-

perse like a postmodern Osiris? It is a question whose answer is necessarily incomplete. As in the cluster of keychains, Bradley gathers masculine tropes into unresolved assemblages that group something authentic with something partial, something imitative, and something wished for. Matt Morris is an artist, curator, and writer based in Chicago.