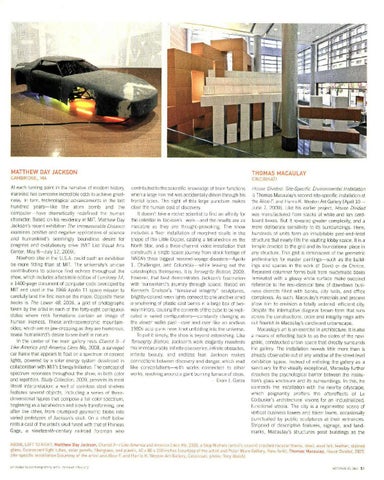 CAMBRIDGE, MA At each turning point in the narrative of modern history, mankind has overcome incredible odds to achieve greatness. In turn, technological advancements in the last hundred years-like the atom bomb and the computer-have dramatically redefined the human character. Based on his residency at MIT, Matthew Day Jackson's recent exhibition The Immeasurable Distance examines positive and negative applications of science and humankind's seemingly boundless desire for progress and evolutionary drive [MIT List Visual Arts Center: May 8-July 12, 2009]. Nowhere else in the U.S.A. could such an exhibition be more fitting than at MIT. The university's unique contributions to science find echoes throughout the show, which includes a facsimile edition of Luminary ]A, a 1400-page document of computer code developed by MIT and used in the 1969 Apollo 11 space mission to carefully land the first man on the moon. Opposite these books is The Lower 48, 2006, a grid of photographs taken by the artist in each of the forty-eight contiguous states where rock formations contain an image of human likeness. These anthropomorphic mountainsides, which are as jaw-dropping as they are humorous, reveal humankind's desire to see itself in nature. In the center of the main gallery rests Chariot I-/t Like America and America Likes Me, 2008, a salvaged car frame that appears to float on a spectrum of colored lights, powered by a solar energy system developed in collaboration with MIT's Energy Initiative. The concept of spectrum resonates throughout the show, in both color and repetition. Study Collection, 2009, presents its most literal interpretation: a wall of stainless steel shelves features several objects, including a series of threedimensional figures that compose a full color spectrum, beginning as a tetrahedron and slowly transforming, one after the other, from crumpled geometric blobs into varied prototypes of Jackson's skull. On a shelf below rests a cast of the artist's skull fused with that of Phineas Gage, a nineteenth-century railroad foreman who

contributed to the scientific knowledge of brain functions when a large iron rod was accidentally driven through his frontal lobes. The sight of this large puncture makes clear the human cost of discovery. It doesn't take a rocket scientist to find an affinity for the celestial in Jackson's work-and the results are as macabre as they are thought-provoking. The show includes a floor installation of morphed skulls in the shape of the Little Dipper, casting a tetrahedron as the North Star, and a three-channel video installation that constructs a single space journey from stock footage of NASA's three biggest manned-voyage disasters-Apollo 1, Challenger, and Columbia-while leaving out the catastrophes themselves. It is Tensegrity Biotron, 2009, however, that best demonstrates Jackson's fascination with humankind's journey through space. Based on Kenneth Snelson's "tensional integrity" sculptures, brightly-colored neon lights connect to one another amid a smattering of plastic cast bones in a large box of twoway mirrors, causing the contents of the cube to be replicated in varied configurations-constantly changing as the viewer walks past-over and over like an endless 1980s acid-punk neon knot unfolding into the universe. To put it simply, the show is beyond astonishing. Like Tensegrity Biotron, Jackson's work elegantly manifests the immeasurable: infinite discoveries, infinite obstacles, infinite beauty, and endless fear. Jackson makes connections between discovery and danger, which read like constellations-with works connected to other works, revolving around a giant burning furnace of ideas. Evan I (Ar7a

House Divided: Site-Specific Environmental Installation is Thomas Macaulay's second site-specific installation at the Alice F.and Harris K. Weston Art Gallery [April 10June 7, 2009]. Like his earlier project, House Divided was manufactured from stacks of white and tan cardboard boxes, But it revealed greater complexity, and a more deliberate sensitivity to its surroundings. Here, hundreds of units form an inhabitable post-and-lintel structure that nearly fills the vaulting lobby space. It is a temple devoted to the grid and its foundational place in any structure. This grid is reminiscent of the geometric preliminaries for master paintings-such as the buildings and spaces in the work of David or de Chirico. Repeated columnar forms built from readymade boxes laminated with a glossy white surface make succinct reference to the neo-classical tone of downtown business districts filled with banks, city halls, and office complexes. As such, Macaulay's materials and process allow him to envision a totally ordered, efficient city. Despite the interruptive diagonal brown form that runs across the constructions, order and integrity reign without flourish in Macaulay's cardboard urbanscape. Macaulay's art is an exercise in architecture. It is also a means of reflecting back to us the states of the navigable, constructed urban space that directly surrounds the gallery. The installation reveals little more than is already observable out of any window of the street-level exhibition space. Instead of enlisting the gallery as a sanctuary for the visually exceptional, Macaulay further dissolves the psychological barrier between the institution's glass enclosure and its surroundings. In this, he connects the installation with the nearby cityscape, which poignantly proffers the aftereffects of Le Corbusier's architectural visions for an industrialized, functional utopia. The city is a regimented scene of vertical business towers and token lawns, occasionally punctuated by public sculptures at their entrances. Stripped of descriptive features, signage, and landmarks, Macaulay's structures posit buildings as the

primary intermediaries between humankind and its environment. The aim here is not to present art as architectural model, as is increasingly the case with urban planning and architectural proposals adopting the language of contemporary sculpture. One might think of Isa Genzken's proposals for Ground Zero, for example, as visionary and prescriptive. By contrast, Macaulay's distilled visual means and stark use of mass-produced materials raise a psychological mirror to the structures within and around which social conditions develop, To make one's way through House Divided recalls the experience of makeshift haunted houses. The installation interprets Cincinnati and similar cities anemicallythat is, as colorless, vacant, pristine, and fallible ghost towns. The dark, narrow corridors that cut through the installation beg for psychoanalytic response. From within, the house is heavy and dense, with little room to move about. Were a group to want to enter the halls between the boxes, its members would have to do so one at a time or single file. It is not so much that the installation feels like an overwhelmingly unhappy home, but rather that it conveys abandonment and obsolescence. What's more, the project's temporariness gives it a sense of instability, undoubtedly reinforced by its title. Ultimately, however, Macaulay's installation functions as a reminder that the built surroundings are neither absolutely stable nor permanent. Like the city outside, his temporary metropolis will be dismantled. His efforts palpably foreshadow this process of physical and mental deconstruction. -Matt Morris

Anri Sala's exhibition Purchase Not By Moonlight is conceived as a spectacle fully integrated into the sweeping, angular galleries of the Contemporary Arts Center [May 30-August 30, 2009]. Projected films, photographs, and sculptures perpetuate a dusky state of partial comprehension as delicately reconfigured fragments, eroded narratives, communication breakdowns, and an all-too-lifelike blending of opposites consume exhibition spaces that have been painted in gradually darker shades of gray as one proceeds through two floors of work. The photographic series Passage a c6te de I'heure, 2006, hangs on an angled wall at the entrance and high across the front of a balcony overlooking the space. Each black-and-white image directs to a meeting point between two walls and the ceiling. Along their corners, dark moths gather. As their numbers dwindle, the exhibition's emphasis on the gradual quality of loss is put forth. Sala's work rewards those who keep looking. Clues found in snippets of story become substantiated through the work's elongated duration. Take, for instance, the silent, sixty-second, 16 mm color film Agassi, 2006, in which a white dot appears for only 125 milliseconds at a time as a tennis ball approaches Andre Agassi. In terms of cinema, this dot normally indicates that the reels need to be switched. But Sala's work being a realm of halftruths, this image suggests that the tennis match continues ad infinitum. Throughout the exhibition, means of communication are contrasted, often portraying a poignant disruption between parties. Rather than commenting exclusively on the contradictions and complexities endemic to, say, the politics of his Albanian homeland, Sala's work tackles dialogue and exchange around the globe-socially and interpersonally. In Lak-Kat, 2004, a teacher and three small students sit in near-darkness, practicing vocabulary in Wolof. In one sequence, a small boy mispronounces the word for "shimmer," repeating "supper" over and over instead. Is this the expression of a basic physical need sublimated through descriptive aesthetic

terminology? The accidental similarity between the two words strikes upon a semantic oddity, and possibly also a self-aware comment about art's function in a global culture consumed with crises and needs. In Answer Me, 2008, a girlfriend's attempts to break up a relationship are drowned out by the drumming of a young man who sits, facing away from her, inside a dome in a former listening station in Berlin. As it unfolds, the scene shows a conflict between means of expression, an echoing overlap in which verbal conversation and musical rhythm both reverberate around the space and risk never meeting up at all. Long Sorrow, 2005, however, unifies these and other recurring opposites. This enigmatic film gradually provides a clear view of saxophonist Jemeel Moondoc performing improvisations outside an apartment window in a densely populated city, while wearing a branch of hydrangea tucked among his dreaded tresses. He mutters and half-pronounces syllables between toots on the sax, as he overlooks trees and tall apartment buildings alike. The simultaneous use of music and language by Moondoc's character yields a mysteriously hopeful moment in the unresolved plotlines of Sala's exhibition. Almost right away though, this instant of clarity fades. The live performance of A Spurious Emission, 2007, a score based on the soundtrack for his film Air Cushioned Ride, 2007, involves two pieces of musicone Baroque and the other Country Western-that fade back and forth like overlapping radio frequencies. It crystallizes Sala's half-lit, murky aesthetic, which reflects a hybrid culture where different experiences occur simultaneously. For Sala, beauty lies in the collision, in the rare potential for something new to emerge from an unsuspecting dialogue. -Matt Morris