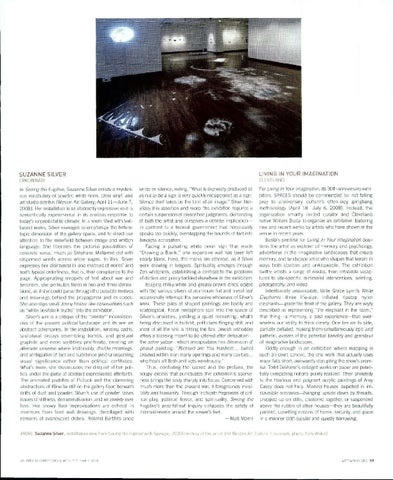 LIVING IN YOUR IMAGINATION

In Seeing the Fugitive, Suzanne Silver enlists a mysteri ous vocabulary of powder, white neon, clear vinyl, and art studio detritus [Weston Art Gallery; April 11 June 7, 20081. Her installation is as abstractly expressive as it is semantically experimental in its anxious response to today's unpredictable climate, In a room filled with textbased works, Silver manages to emphasize the heterotopic dimension of the gallery space, and to direct our attention to the minefield between image and written language. She liberates the pictorial possibilities of concrete verse, much as St6phane Mallarme did with dispersed words across white pages. In this, Silver expresses her disinterest in and mistrust of words' and text's typical orderliness, that is, their compliance to the page. Appropriating snippets of text about war and terrorism, she permutes them in two and three dimen sions, as if she could parse through the possible motives and meanings behind the propaganda and its codes. She also slips small Jenny Holzer 'ike observations such as "white lies/black truths" into the exhibition. Silver's aim is a critique of the "sinister" inconsistencies of the present political landscape and its war on abstract adversaries. In the installation, winding paths, sculptural decoys resembling bombs, and gestural graphite and neon scribbles proliferate, creating an alternate universe where irrationality, double meanings, and ambiguities of fact and substance yield unassuming visual signiticance rather than political certitudes. What's more, she dissimulates the disquiet of her politics under the guise of abstract expressionist afterbirth. The animated puddles of Pollock and the clamoring abstractions of Kline lie still on the gallery floor, beneath drifts of dust and powder. Silver's use of powder raises issues of stillness, dematerialization, and an anxiety over loss. Her snowy floor improvisations are echoed in murmurs from faint wall drawings, decollaged with remains of evanescent debris. Roland Barthes once ABOVIi: Suzanne Sitver, iwt0 ll.i,on view t oilnv

wrote on silence, noting, "What is expressly produced so as not to be a sign is very quickly recuperate d as a sign. Silence itself takes on the form of an image." Silver Ifteralizes this assertion and more: the exhibition requires a certain suspension of prescribed judgments, demanding of both the artist and ourselves a definite im plicationin contrast to a federal government that notoriously speaks too quickly, overstepping the bounds of fact into baseless accusation. Facing a pulsating white neon sign that reads "Drawing a Blank," one expansive wall ha s been left nearly blank. Here, the marks are ethereal, as if Silver were drawing in tongues. Spirituality emergtes through Zen whiteness, establishing a contrast to th e problems of diction and policy tackled elsewhere in the exhibition. Bulging milky-white and greasy-brown dliscs edged with the various silvers of aluminum foil antd metal leaf occasionally interrupt the pervasive whitenes s of Silver's work. These piles of shaped paintings are bodily and scatological. Fecal metaphors spill into th e space of Silver's anxieties, yielding a quiet reckon ing: what's being discussed is bullshit, politicians flingiing shit, and most of all the shit is hitting the fan. Jewisih orthodoxy offers a blessing meant to be uttered after d efecation the asheryatzar-whichencapsulates this d imension of primal paintfng: "Blessed are You Hashe rm... [who] created within man many openings and man y cavities... who heals all flesh and acts wondrously." Thus, conflating the sacred and the p rofane, the soupy excess that punctuates the exhibitioin's sparse ness brings the body sharply into focus. Con cerned with much more than the present war, it foregro unds invisi bility and humanity. Through inchoate fragm ents of crnt ical play, political fervor, and spirituality, Seeing the Fugitive's post-fallout inquiry collapses thie safety of internal reverie around the viewer's feet. -Matt Morris

For Living in Your Imagination, its 30th anniversary exhibition, SPACES should be commended for not falling prey to anniversary culture's often-lazy gangbang methodology [April 18 July 6, 2008], Instead, the organization smartly invited curator and Cleveland native William Busta to organize an exhibition featuring new and recent works by artists who have shown at the venue in recent years. Busta's premise for Living In Your Imagination positions the artist as explorer of memory and psychology, adventurer in the imaginative landscapes that create memory, and landscape artist who shapes that terrain in ways both obvious and unknowable. The exhibition swiftly enlists a range of media, from inflatable sculptures to site specific minimalist interventions, painting, photography, and video. Intentionally unavoidable, Billie Grace Lynn's White Elephants-three life-size, inflated ripstop nylon elephants--grace the front of the gallery. They are wryly described as representing "the elephant in the room," that thing-a memory, a past experience-that overwhelms our ability to think clearly. One lies on its side, partially deflated, making them simultaneously epic and pathetic, avatars of the potential banality and grandeur of imaginative landscapes. Oddly enough in an exhibition where mapping is such an overt conceit, the one work that actually uses maps falls short, awkwardly disrupting the show's premise. Todd DeVriese's collaged works on paper are potentially compelling notions poorly realized. Their proximity to the hilarious and poignant acrylic paintings of Amy Casey does not help. Modest houses depicted in implausible scenarios-hanging upside down by threads, propped up on stilts, clustered together, or suspended above the rubble of other houses-they are beautifully painted, upsetting notions of home, security, and place in a manner both jocular and quietly harrowing. (:iril C , i m m/h; phuh,