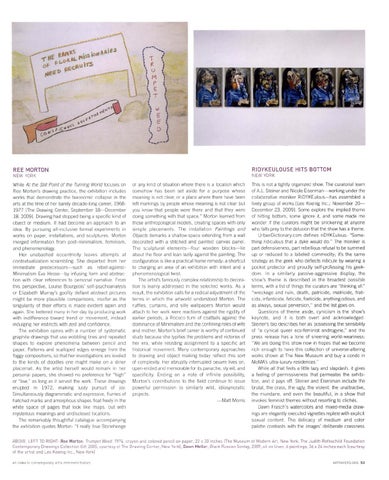 While At the Still Point of the Turning World focuses on Ree Morton's drawing practice, the exhibition includes works that demonstrate the taxonomic collapse in the arts at the time of her barely decade-long career, 19581977 [The Drawing Center; September 18—December 18, 2009]. Drawing had stopped being a specific kind of object or medium. It had become an approach to an idea. By pursuing all-inclusive formal experiments in works on paper, installations, and sculptures, Morton merged information from post-minimalism, feminism, and phenomenology. Her unabashed eccentricity leaves attempts at contextualization scrambling. She departed from her immediate predecessors—such as rebel-againstMinimalism Eva Hesse—by infusing form and abstraction with clear references to personal narrative. From this perspective, Louise Bourgeois' self-psychoanalysis or Elizabeth Murray's goofily defiant abstract pictures might be more plausible comparisons, insofar as the singularity of their efforts is made evident again and again. She bettered many in her day by producing work with indifference toward trend or movement, instead indulging her instincts with zest and confidence. The exhibition opens with a number of systematic graphite drawings that use wobbling lines and repeated shapes to explore phenomena between pencil and paper. Patterns and scalloped edges emerge from the foggy compositions, so that her investigations are leveled to the kinds of doodles one might make on a diner placemat. As the artist herself would remark in her personal papers, she showed no preference for "high" or "low," as long as it served the work. These drawings erupted in 1972, making lusty pursuit of joy. Simultaneously diagrammatic and expressive, flurries of hatched marks and amorphous shapes float freely in the white space of pages that look like maps, but with mysterious meanings and undisclosed locations. The remarkably thoughtful catalogue accompanying the exhibition quotes Morton.- "I really love Stonehenge

or any kind of situation where there is a location which somehow has been set aside for a purpose whose meaning is not clear, or a place where there have been left markings by people whose meaning is not clear but you know that people were there and that they were doing something with that space." Morton learned from those anthropological models, creating spaces with only simple placements. The installation Paintings and Objects demarks a shallow space extending from a wall decorated with a stitched and painted canvas panel. The sculptural elements—four wooden blocks—lie about the floor and lean lazily against the painting. The configuration is like a practical home remedy: a shortcut to charging an area of an exhibition with intent and a phenomenological twist. The artist's famously complex relationship to decoration is leanly addressed in the selected works. As a result, the exhibition calls for a radical adjustment of the terms in which the artworld understood Morton. The ruffles, curtains, and silly wallpapers Morton would attach to her work were reactions against the rigidity of earlier periods, a Rococo turn of coattails against the dominance of Minimalism and the confining roles of wife and mother. Morton's brief career is worthy of continued study because she typifies the problems and victories of her era, while resisting assignment to a specific art historical movement. Many contemporary approaches to drawing and object making today reflect this sort of complexity. Her abruptly interrupted oeuvre lives on, open-ended and memorable for its panache, sly wit, and specificity. Ending on a note of infinite possibility, Morton's contributions to the field continue to issue powerful permission to similarly wild, idiosyncratic projects. —Matt Morris

This is not a tightly organized show. The curatorial team of A.L. Steiner and Nicole Eisenman—working under the collaborative moniker RiDYKEulous—has assembled a lively group of works [Leo Koenig Inc.; November 20— December 23, 20091. Some explore the implied theme of hitting bottom, some ignore it, and some made me wonder if the curators might be snickering at anyone who falls prey to the delusion that the show has a theme. UrbanDictionary.com defines rlDYKEulous: "Something ridiculous that a dyke would do." The moniker is part defensiveness, part rebellious refusal to be summed up or reduced to a labeled commodity; it's the same strategy as the geek who deflects ridicule by wearing a pocket protector and proudly self-professing his geekdom. In a similarly passive-aggressive display, the show's theme is described in the broadest possible terms, with a list of things the curators are "thinking of:" "wreckage and ruin, death, patricide, matricide, fraticide, infanticide, feticide, foeticide, anything odious, and as always, sexual perversion," and the list goes on. Questions of theme aside, cynicism is the show's keynote, and it is both overt and acknowledged. Steiner's bio describes her as possessing the sensibility of "a cynical queer eco-feminist androgyne," and the press release has a tone of sneering world-weariness: "We are doing this show now in hopes that we become rich enough to have this collection of universe-altering works shown at The New Museum and buy a condo in MoMA's ultra-luxury residences." While all that feels a little lazy and slapdash, it gives a feeling of permissiveness that permeates the exhibition, and it pays off. Steiner and Eisenman include the brutal, the crass, the ugly, the violent, the unattractive, the mundane, and even the beautiful, in a show that invokes feminist themes without resorting to cliches. Dawn Frasch's watercolors and mixed-media drawings are elegantly executed vignettes replete with explicit sexual content. The delicacy of medium and color palette contrasts with the images' deliberate crassness

Exhibition review of Ree Morton's survey exhibition 'At the Still Point of the Turning World,' September 18 – December 18. 2009 at The Drawi...

Exhibition review of Ree Morton's survey exhibition 'At the Still Point of the Turning World,' September 18 – December 18. 2009 at The Drawi...