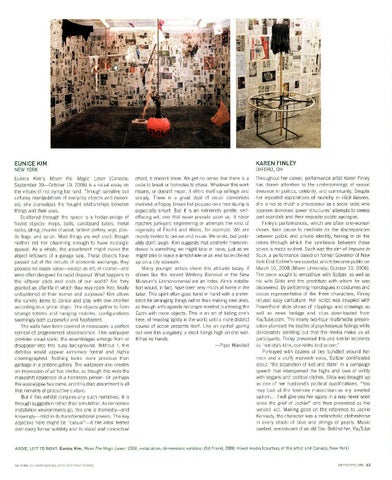 NEW YORK Eunice Kim's Moon the Magic Loser [Canada; September 19-October 19, 2008] is a visual essay on the virtues of not trying too hard. Through sensitive but unfussy manipulations of everyday objects and materials, she dramatizes the fraught relationships between things and their uses. Scattered through the space is a hodge-podge of found objects: mops, balls, cardboard tubes, metal racks, string, chunks of wood, broken pottery, wigs, plastic bags, and so on. Most things are well used, though neither old nor charming enough to have nostalgic appeal. As a whole, the assortment might evoke the abject leftovers of a garage sale. These objects have passed out of the circuits of economic exchange; they possess no resale value--except as art, of course-and were often designed for rapid disposal. What happens to the leftover odds and ends of our world? Are they granted an afterlife in which they may roam free, finally unburdened of their names and purposes? Kim allows the sundry items to dance and play with one another according to a lyrical illogic. The objects gather to form strange totems and hanging mobiles, configurations seemingly both purposeful and haphazard. The walls have been covered in newspaper, a perfect symbol of programmed obsolescence. This wallpaper provides visual static: the assemblages emerge from or disappear into this busy background. Without it, the detritus would appear extremely formal and highly choreographed. Nothing looks more precious than garbage in a pristine gallery. The wallpaper also creates an impression of ad hoc shelter, as though this were the makeshift residence of a homeless person. Or perhaps the apocalypse has come, and this drab assortment is all that remains of productive culture. But if this exhibit conjures any such narratives, it is through suggestion rather than simulation. As immersive installation environments go, this one is markedly-and knowingly mild in its transformational powers. The key adjective here might be "casual"-if the artist fretted over every formal subtlety and its visual and conceptual

effect, it doesn't show. We get no sense that there is a code to break or footnotes to chase. Whatever this work means, or doesn't mean, it offers itself up willingly and simply. There is a great deal of visual cleverness involved: a floppy, brown hat plopped or a tree stump is especially smart. But it is an extremely gentle, selfeffacing wit, one that never prevails upon us. It never reaches junkyard engineering or attempts the kind of ingenuity of Fischli and Weiss, for example. We are merely invited to peruse and muse. We smile, but probably don't laugh. Kim suggests that aesthetic transcendence is something we might take or leave, just as we might take or leave a iampshade or an end table offered up on a city sidewalk. Many younger artists share this attitude today, if shows like the recent Whitney Biennial or the New Museum's Unmonumental are an index. Kim's installation would, in fact, have been very much at home in the latter. This spirit often goes hand in hand with a preference for arranging things rather than making new ones, as though art's agenda no longer merited burdening the Earth with more objects. This is an art of biding one's time, of treading lightly in the world until a more distinct course of action presents itself. Like an eyeball gazing out over this purgatory, a clock hangs high on one wall. It has no hands. -Piper Marshall

Throughout her career, performance artist Karen Finley has drawn attention to the underpinnings of sexual deviance in politics, celebrity, and community. Despite her repeated explorations of raunchy or illicit liaisons, she is not so much a provocateur as a social critic who opposes dominant power structures' attempts to sweep past scandals and their requisite public apologies. Finley's performances, which are often one-woman shows, take pause to meditate on the discrepancies between public and private identity, honing in on the crises through which the symbiosis between these selves is made evident, Such was the aim of Impulse to Suck, a performance based on former Governor of New York Eliot Spitzer's sex scandal, which became public on March 10, 2008 [Miami University; October 10, 2008]. The piece sought to empathize with Spitzer, as well as his wife Silda and the prostitute with whom he was discovered. By performing monologues in costumes and voices representative of the three characters, Finley refuted easy caricature. Her script was coupled with PowerPoint slide shows of clippings and drawings as well as news footage and clips downloaded from YouTube.com. The nearly two-hour multimedia presentation plumbed the depths of psychosexual failings while deliberately pointing out that the media make us all participants. Finley presented this and similar incidents as "society's kink, our kinks to discover." Portrayed with dozens of ties bundled around her neck and a stuffy mannish voice, Spitzer pontificated about "the separation of lust and state" in a campaign speech that interspersed the highs and lows of virility with slogans and political cliches. Silda was brought up as one of her husband's political qualifications, "You may look at the feminine masochism as my inverted sadism... I will give you her agony in a way never seen since the grief of Jackie!" and then presented as the second act. Making good on the reference to Jackie Kennedy, the character was a melancholic clotheshorse in every shade of blue and strings of pearls. Music swelled, reminiscent of an old film. Behind her, YouTube

KARRIE HOVEY PEORIA, IL footage showed a view out of the window of a moving train as it passed through the rain. Silda asked the audience to consider the work of reinventing and repairing one's public image. Despite her best brainstorming publicity tactics, she would fall apart, hysterically shouting, "This scandal is mine!" "My compulsion is in my loving!" "Iam the sad empress! I am the saddest woman in the land, and I love you despite my deep sadness!" and finally declaring, "I'll hold my head high like the head of a penis!" As Silda ranted, several students passed out Dum Dums she called "suckies." By enjoying the candy, the audience was further incriminated in the mash-up of sex acts and identity politics. Finley closed by enacting the parts of both the prostitute and Spitzer, set against footage from Alfred Hitchcock's Vertigo. As James Stewart knocked on a hotel room door, Finley stood in front of the screen, inserting herself into the film, dressed as the hooker but knocking alongside the man. A moon seen in green light out of the hotel window lit the screen as Finley, again dressed in the man's shirt and ties, stood beside a window in the performance space. The Spitzer character reverted equally into his inner woman and to his own boyhood as he described "the multiplicity of me," While this tender finale suggests sympathy for Spitzer's weaknesses, Finley ultimately scrutinized the expense that society pays for the flawed private lives of its government officials. -Matt Morris

Karrie Hovey has gained a reputation for taking on sociopolitical subjects in her installation projects that, cerebral and sensitive to form, use ordinary materials. Her work represents a critical position for art that goes beyond taste-making or provocation. She neither posits a signature style nor does she attempt to rehabilitate place. Instead she allows site and culture to influence her production-like an architect who considers the context of a proposed building and its parcel of land. Producing artworks to respond to place, region, and events, she remains cognizant of disciplinary tradition and professional responsibility. But Hovey is also fond of retrofitting fabric forms and processes-she was introduced to craft traditions before studying art and design-into social subjects that are paramount to her sites. As an installation artist, her work enlists a number of methods, traditions, and subjects pertaining to public works and viewer interactivity. But she is also swayed by the intimacy of the studio and the dialogue with materials as construction and formal concerns are also tantamount in her work. Her newest project, produced during a three-month residency at The Prairie Center of the Arts, is a striking hybrid of ecological commentary and meditation on the manufacturing history of Peoria, Illinois' industrial riverfront. Her subject was recycling, or more precisely the fact that the metropolitan area of nearly 300,000 people does not have an effective recycling program. As a result, she only used found recyclable materials as she tackled Midwestern agricultural icons and the history of the site, which was once one of the nation's largest rope fabrication plants. In Rethos, Hovey enveloped the entire space of the first floor gallery with paper and corrugated cardboard, complemented by found packing material, plastic bags, and faux foliage. The work filled a 280-square-foot space with a faux woodland woven of material saved from the Peoria landfill. Rethos embodies three consistent issues in her work-a somewhat reductive

aesthetic, a penchant for poetic narrative, and the production of tactile environments. It is also intimate, dreamlike, and more theatrical than her earlier work, which occasionally involved considerations of texts and images. While the work doesn't overtly decry the city's non-policy of recycling, the playful appearance and illustrative bent of Hovey's heavy-gauged colored paper petrified forest potently relates the inevitability of nature's demise ifwe continue on our present course. Upstairs, in the cavernous 70,000 square feet of unspoiled raw space, the experience was much different. Hovey essentially wove a series of large feed silo forms from paper and plastic. Some were bound with the kind of thick, coarse rope once produced on the site. Her tall pliable cylinders-averaging from around seven to nine feet in height and three to five feet in diameterwere suspended from the ceiling along a fifty-foot section of a breathtaking sandblasted bay. Each silo form is unique. Some are made of foam packing particles encased in clear plastic sleeves. Others consist of packaged feed corn, paper products or sawdust. Hovey employed basic knotting and bundling techniques to construct rows of silent floating sculpture, at once homespun and formally minimal. Many of these forms recall sections of the original stranding and cabling techniques of early rope making. Some have exposed ribs and others have the pointed conic roofs of old wooden silos and grain elevators. Industrial and agricultural simulacra of tan, rust, white, and steel-gray collapse an oddly nostalgic impression of the prairie economy onto the frame and history of the erstwhile factory. These installations are amongst Hovey's most formally ambitious and thematically sophisticated enterprises. Her message about recycling may suggest that our debris can become cultural capital. More importantly, she gives us a surprisingly intimate and poetic bridge between the consumed history of the past and the wasteful economy of the present. _Paul Krainak

ABOVE: Karrie Hovey, Silo Series, 2008, instalation, dimensions variable fcourtesy of the artist and the Prairie Center of the Arts, Peoria, ILI