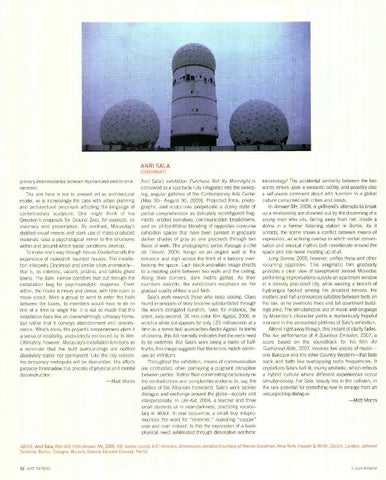 primary intermediaries between humankind and its environment. The aim here is not to present art as architectural model, as is increasingly the case with urban planning and architectural proposals adopting the language of contemporary sculpture. One might think of Isa Genzken's proposals for Ground Zero, for example, as visionary and prescriptive. By contrast, Macaulay's distilled visual means and stark use of mass-produced materials raise a psychological mirror to the structures within and around which social conditions develop, To make one's way through House Divided recalls the experience of makeshift haunted houses. The installation interprets Cincinnati and similar cities anemicallythat is, as colorless, vacant, pristine, and fallible ghost towns. The dark, narrow corridors that cut through the installation beg for psychoanalytic response. From within, the house is heavy and dense, with little room to move about. Were a group to want to enter the halls between the boxes, its members would have to do so one at a time or single file. It is not so much that the installation feels like an overwhelmingly unhappy home, but rather that it conveys abandonment and obsolescence. What's more, the project's temporariness gives it a sense of instability, undoubtedly reinforced by its title. Ultimately, however, Macaulay's installation functions as a reminder that the built surroundings are neither absolutely stable nor permanent. Like the city outside, his temporary metropolis will be dismantled. His efforts palpably foreshadow this process of physical and mental deconstruction. -Matt Morris

Anri Sala's exhibition Purchase Not By Moonlight is conceived as a spectacle fully integrated into the sweeping, angular galleries of the Contemporary Arts Center [May 30-August 30, 2009]. Projected films, photographs, and sculptures perpetuate a dusky state of partial comprehension as delicately reconfigured fragments, eroded narratives, communication breakdowns, and an all-too-lifelike blending of opposites consume exhibition spaces that have been painted in gradually darker shades of gray as one proceeds through two floors of work. The photographic series Passage a c6te de I'heure, 2006, hangs on an angled wall at the entrance and high across the front of a balcony overlooking the space. Each black-and-white image directs to a meeting point between two walls and the ceiling. Along their corners, dark moths gather. As their numbers dwindle, the exhibition's emphasis on the gradual quality of loss is put forth. Sala's work rewards those who keep looking. Clues found in snippets of story become substantiated through the work's elongated duration. Take, for instance, the silent, sixty-second, 16 mm color film Agassi, 2006, in which a white dot appears for only 125 milliseconds at a time as a tennis ball approaches Andre Agassi. In terms of cinema, this dot normally indicates that the reels need to be switched. But Sala's work being a realm of halftruths, this image suggests that the tennis match continues ad infinitum. Throughout the exhibition, means of communication are contrasted, often portraying a poignant disruption between parties. Rather than commenting exclusively on the contradictions and complexities endemic to, say, the politics of his Albanian homeland, Sala's work tackles dialogue and exchange around the globe-socially and interpersonally. In Lak-Kat, 2004, a teacher and three small students sit in near-darkness, practicing vocabulary in Wolof. In one sequence, a small boy mispronounces the word for "shimmer," repeating "supper" over and over instead. Is this the expression of a basic physical need sublimated through descriptive aesthetic

terminology? The accidental similarity between the two words strikes upon a semantic oddity, and possibly also a self-aware comment about art's function in a global culture consumed with crises and needs. In Answer Me, 2008, a girlfriend's attempts to break up a relationship are drowned out by the drumming of a young man who sits, facing away from her, inside a dome in a former listening station in Berlin. As it unfolds, the scene shows a conflict between means of expression, an echoing overlap in which verbal conversation and musical rhythm both reverberate around the space and risk never meeting up at all. Long Sorrow, 2005, however, unifies these and other recurring opposites. This enigmatic film gradually provides a clear view of saxophonist Jemeel Moondoc performing improvisations outside an apartment window in a densely populated city, while wearing a branch of hydrangea tucked among his dreaded tresses. He mutters and half-pronounces syllables between toots on the sax, as he overlooks trees and tall apartment buildings alike. The simultaneous use of music and language by Moondoc's character yields a mysteriously hopeful moment in the unresolved plotlines of Sala's exhibition. Almost right away though, this instant of clarity fades. The live performance of A Spurious Emission, 2007, a score based on the soundtrack for his film Air Cushioned Ride, 2007, involves two pieces of musicone Baroque and the other Country Western-that fade back and forth like overlapping radio frequencies. It crystallizes Sala's half-lit, murky aesthetic, which reflects a hybrid culture where different experiences occur simultaneously. For Sala, beauty lies in the collision, in the rare potential for something new to emerge from an unsuspecting dialogue. -Matt Morris

Exhibition review for Anri Sala's 'Purchase Not by Moonlight,' May 30 – August 30, 2009 at the Contemporary Arts Center, Cincinnati, OH

Exhibition review for Anri Sala's 'Purchase Not by Moonlight,' May 30 – August 30, 2009 at the Contemporary Arts Center, Cincinnati, OH