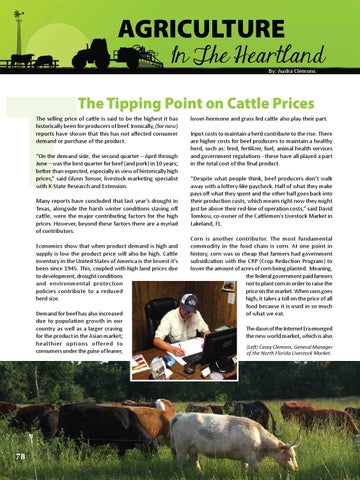 The Tipping Point on Cattle Prices The selling price of cattle is said to be the highest it has historically been for producers of beef. Ironically, (for now) reports have shown that this has not affected consumer demand or purchase of the product. “On the demand side, the second quarter – April through June – was the best quarter for beef (and pork) in 10 years; better than expected, especially in view of historically high prices,” said Glynn Tonsor, livestock marketing specialist with K-State Research and Extension. Many reports have concluded that last year’s drought in Texas, alongside the harsh winter conditions staving off cattle, were the major contributing factors for the high prices. However, beyond these factors there are a myriad of contributors. Economics show that when product demand is high and supply is low the product price will also be high. Cattle inventory in the United States of America is the lowest it’s been since 1945. This, coupled with high land prices due to development, drought conditions and environmental protection policies contribute to a reduced herd size. Demand for beef has also increased due to population growth in our country as well as a larger craving for the product in the Asian market; healthier options offered to consumers under the guise of leaner,

lower-hormone and grass fed cattle also play their part. Input costs to maintain a herd contribute to the rise. There are higher costs for beef producers to maintain a healthy herd, such as: feed, fertilizer, fuel, animal health services and government regulations - these have all played a part in the total cost of the final product. “Despite what people think, beef producers don’t walk away with a lottery-like paycheck. Half of what they make pays off what they spent and the other half goes back into their production costs, which means right now they might just be above their red-line of operation costs,” said David Tomkow, co-owner of the Cattlemen’s Livestock Market in Lakeland, FL. Corn is another contributor. The most fundamental commodity in the food chain is corn. At one point in history, corn was so cheap that farmers had government subsidization with the CRP (Crop Reduction Program) to lower the amount of acres of corn being planted. Meaning, the federal government paid farmers not to plant corn in order to raise the price on the market. When corn goes high, it takes a toll on the price of all food because it is used in so much of what we eat. The dawn of the Internet Era emerged the new world market, which is also (Left) Casey Clemons, General Manager of the North Florida Livestock Market.