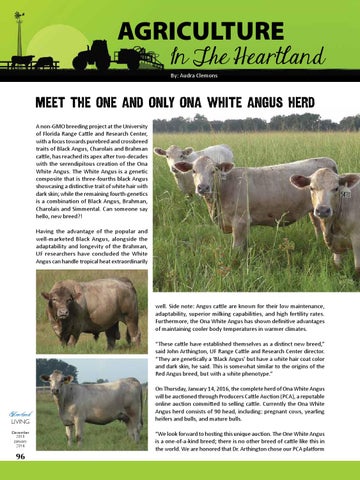 Meet the One and Only Ona White Angus Herd A non-GMO breeding project at the University of Florida Range Cattle and Research Center, with a focus towards purebred and crossbreed traits of Black Angus, Charolais and Brahman cattle, has reached its apex after two-decades with the serendipitous creation of the Ona White Angus. The White Angus is a genetic composite that is three-fourths black Angus showcasing a distinctive trait of white hair with dark skin; while the remaining fourth-genetics is a combination of Black Angus, Brahman, Charolais and Simmental. Can someone say hello, new breed?! Having the advantage of the popular and well-marketed Black Angus, alongside the adaptability and longevity of the Brahman, UF researchers have concluded the White Angus can handle tropical heat extraordinarily

well. Side note: Angus cattle are known for their low maintenance, adaptability, superior milking capabilities, and high fertility rates. Furthermore, the Ona White Angus has shown definitive advantages of maintaining cooler body temperatures in warmer climates. “These cattle have established themselves as a distinct new breed,” said John Arthington, UF Range Cattle and Research Center director. “They are genetically a ‘Black Angus’ but have a white hair coat color and dark skin, he said. This is somewhat similar to the origins of the Red Angus breed, but with a white phenotype.”

On Thursday, January 14, 2016, the complete herd of Ona White Angus will be auctioned through Producers Cattle Auction (PCA), a reputable online auction committed to selling cattle. Currently the Ona White Angus herd consists of 90 head, including: pregnant cows, yearling heifers and bulls, and mature bulls. “We look forward to hosting this unique auction. The One White Angus is a one-of-a-kind breed; there is no other breed of cattle like this in the world. We are honored that Dr. Arthington chose our PCA platform