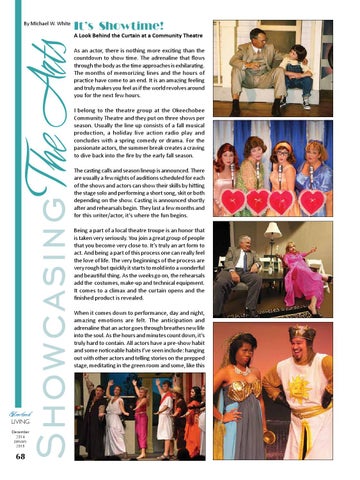 A Look Behind the Curtain at a Community Theatre As an actor, there is nothing more exciting than the countdown to show time. The adrenaline that flows through the body as the time approaches is exhilarating. The months of memorizing lines and the hours of practice have come to an end. It is an amazing feeling and truly makes you feel as if the world revolves around you for the next few hours. I belong to the theatre group at the Okeechobee Community Theatre and they put on three shows per season. Usually the line up consists of a fall musical production, a holiday live action radio play and concludes with a spring comedy or drama. For the passionate actors, the summer break creates a craving to dive back into the fire by the early fall season. The casting calls and season lineup is announced. There are usually a few nights of auditions scheduled for each of the shows and actors can show their skills by hitting the stage solo and performing a short song, skit or both depending on the show. Casting is announced shortly after and rehearsals begin. They last a few months and for this writer/actor, it’s where the fun begins. Being a part of a local theatre troupe is an honor that is taken very seriously. You join a great group of people that you become very close to. It’s truly an art form to act. And being a part of this process one can really feel the love of life. The very beginnings of the process are very rough but quickly it starts to mold into a wonderful and beautiful thing. As the weeks go on, the rehearsals add the costumes, make-up and technical equipment. It comes to a climax and the curtain opens and the finished product is revealed. When it comes down to performance, day and night, amazing emotions are felt. The anticipation and adrenaline that an actor goes through breathes new life into the soul. As the hours and minutes count down, it’s truly hard to contain. All actors have a pre-show habit and some noticeable habits I’ve seen include: hanging out with other actors and telling stories on the prepped stage, meditating in the green room and some, like this