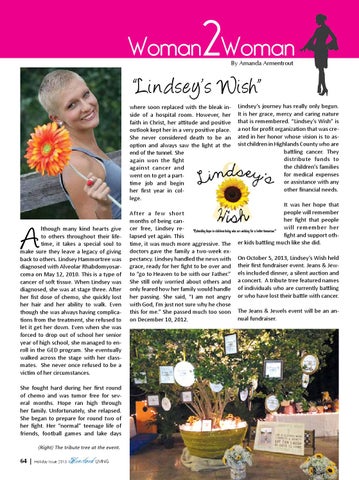 Woman Woman “Lindsey’s Wish” where soon replaced with the bleak inside of a hospital room. However, her faith in Christ, her attitude and positive outlook kept her in a very positive place. She never considered death to be an option and always saw the light at the end of the tunnel. She again won the fight against cancer and went on to get a parttime job and begin her first year in college.

lthough many kind hearts give to others throughout their lifetime, it takes a special soul to make sure they leave a legacy of giving back to others. Lindsey Hammortree was diagnosed with Alveolar Rhabdomyosarcoma on May 12, 2010. This is a type of cancer of soft tissue. When Lindsey was diagnosed, she was at stage three. After her fist dose of chemo, she quickly lost her hair and her ability to walk. Even though she was always having complications from the treatment, she refused to let it get her down. Even when she was forced to drop out of school her senior year of high school, she managed to enroll in the GED program. She eventually walked across the stage with her classmates. She never once refused to be a victim of her circumstances. She fought hard during her first round of chemo and was tumor free for several months. Hope ran high through her family. Unfortunately, she relapsed. She began to prepare for round two of her fight. Her “normal” teenage life of friends, football games and lake days (Right) The tribute tree at the event.

After a few short months of being cancer free, Lindsey relapsed yet again. This time, it was much more aggressive. The doctors gave the family a two-week expectancy. Lindsey handled the news with grace, ready for her fight to be over and to “go to Heaven to be with our Father.” She still only worried about others and only feared how her family would handle her passing. She said, “I am not angry with God, I’m just not sure why he chose this for me.” She passed much too soon on December 10, 2012.

Lindsey’s journey has really only begun. It is her grace, mercy and caring nature that is remembered. “Lindsey’s Wish” is a not for profit organization that was created in her honor whose vision is to assist children in Highlands County who are battling cancer. They distribute funds to the children’s families for medical expenses or assistance with any other financial needs. It was her hope that people will remember her fight that people will remember her fight and support other kids battling much like she did. On October 5, 2013, Lindsey’s Wish held their first fundraiser event. Jeans & Jewels included dinner, a silent auction and a concert. A tribute tree featured names of individuals who are currently battling or who have lost their battle with cancer. The Jeans & Jewels event will be an annual fundraiser.