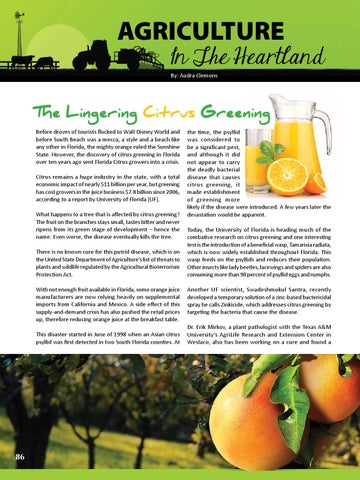 The Lingering Citrus Greening Before droves of tourists flocked to Walt Disney World and before South Beach was a mecca, a style and a beach like any other in Florida, the mighty orange ruled the Sunshine State. However, the discovery of citrus greening in Florida over ten years ago sent Florida Citrus growers into a crisis. Citrus remains a huge industry in the state, with a total economic impact of nearly $11 billion per year, but greening has cost growers in the juice business $7.8 billion since 2006, according to a report by University of Florida [UF]. What happens to a tree that is affected by citrus greening? The fruit on the branches stays small, tastes bitter and never ripens from its green stage of development – hence the name. Even worse, the disease eventually kills the tree. There is no known cure for this putrid disease, which is on the United State Department of Agriculture’s list of threats to plants and wildlife regulated by the Agricultural Bioterrorism Protection Act. With not enough fruit available in Florida, some orange juice manufacturers are now relying heavily on supplemental imports from California and Mexico. A side effect of this supply-and-demand crisis has also pushed the retail prices up, therefore reducing orange juice at the breakfast table. This disaster started in June of 1998 when an Asian citrus psyllid was first detected in two South Florida counties. At

the time, the psyllid was considered to be a significant pest, and although it did not appear to carry the deadly bacterial disease that causes citrus greening, it made establishment of greening more likely if the disease were introduced. A few years later the devastation would be apparent. Today, the University of Florida is heading much of the combative research on citrus greening and one interesting test is the introduction of a beneficial wasp, Tamarixia radiata, which is now widely established throughout Florida. This wasp feeds on the psyllids and reduces their population. Other insects like lady beetles, lacewings and spiders are also consuming more than 90 percent of psyllid eggs and nymphs. Another UF scientist, Swadeshmukul Santra, recently developed a temporary solution of a zinc-based bactericidal spray he calls Zinkicide, which addresses citrus greening by targeting the bacteria that cause the disease. Dr. Erik Mirkov, a plant pathologist with the Texas A&M University’s AgriLife Research and Extension Center in Weslaco, also has been working on a cure and found a