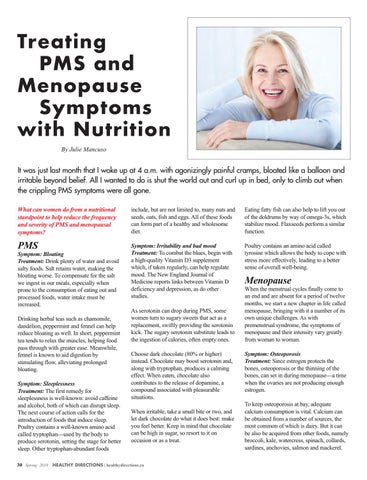 Treating PMS and Menopause Symptoms with Nutrition By Julie Mancuso

It was just last month that I woke up at 4 a.m. with agonizingly painful cramps, bloated like a balloon and irritable beyond belief. All I wanted to do is shut the world out and curl up in bed, only to climb out when the crippling PMS symptoms were all gone. What can women do from a nutritional standpoint to help reduce the frequency and severity of PMS and menopausal symptoms?

Symptom: Bloating Treatment: Drink plenty of water and avoid salty foods. Salt retains water, making the bloating worse. To compensate for the salt we ingest in our meals, especially when prone to the consumption of eating out and processed foods, water intake must be increased.

Symptom: Sleeplessness Treatment: The first remedy for sleeplessness is well-known: avoid caffeine and alcohol, both of which can disrupt sleep. The next course of action calls for the introduction of foods that induce sleep. Poultry contains a well-known amino acid called tryptophanâ&#x20AC;&#x201D;used by the body to produce serotonin, setting the stage for better sleep. Other tryptophan-abundant foods

include, but are not limited to, many nuts and seeds, oats, fish and eggs. All of these foods can form part of a healthy and wholesome diet. Symptom: Irritability and bad mood Treatment: To combat the blues, begin with a high-quality Vitamin D3 supplement which, if taken regularly, can help regulate mood. The New England Journal of Medicine reports links between Vitamin D deficiency and depression, as do other studies.

As serotonin can drop during PMS, some women turn to sugary sweets that act as a replacement, swiftly providing the serotonin kick. The sugary serotonin substitute leads to the ingestion of calories, often empty ones.

Choose dark chocolate (80% or higher) instead. Chocolate may boost serotonin and, along with tryptophan, produces a calming effect. When eaten, chocolate also contributes to the release of dopamine, a compound associated with pleasurable situations.

When irritable, take a small bite or two, and let dark chocolate do what it does best: make you feel better. Keep in mind that chocolate can be high in sugar, so resort to it on occasion or as a treat.

Eating fatty fish can also help to lift you out of the doldrums by way of omega-3s, which stabilize mood. Flaxseeds perform a similar function. Poultry contains an amino acid called tyrosine which allows the body to cope with stress more effectively, leading to a better sense of overall well-being.

When the menstrual cycles finally come to an end and are absent for a period of twelve months, we start a new chapter in life called menopause, bringing with it a number of its own unique challenges. As with premenstrual syndrome, the symptoms of menopause and their intensity vary greatly from woman to woman.

Symptom: Osteoporosis Treatment: Since estrogen protects the bones, osteoporosis or the thinning of the bones, can set in during menopauseâ&#x20AC;&#x201D;a time when the ovaries are not producing enough estrogen.

To keep osteoporosis at bay, adequate calcium consumption is vital. Calcium can be obtained from a number of sources, the most common of which is dairy. But it can be also be acquired from other foods, namely broccoli, kale, watercress, spinach, collards, sardines, anchovies, salmon and mackerel. 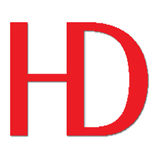