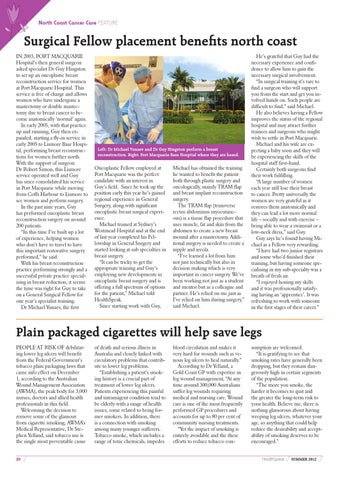 Surgical Fellow placement benefits north coast In 2003, Port Macquarie Hospital’s then general surgeon asked specialist Dr Guy Hingston to set up an oncoplastic breast reconstruction service for women at Port Macquarie Hospital. This service is free of charge and allows women who have undergone a mastectomy or double mastectomy due to breast cancer to become anatomically ‘normal’ again. In early 2005, with that practice up and running, Guy then expanded, starting a fly-in service in early 2005 to Lismore Base Hospital, performing breast reconstructions for women further north. With the support of surgeon Dr Robert Simon, this Lismore service operated well and Guy has since consolidated his service in Port Macquarie while moving from Coffs Harbour to Lismore to see women and perform surgery. In the past nine years, Guy has performed oncoplastic breast reconstruction surgery on around 200 patients. “In this time I’ve built up a lot of experience, helping women who don’t have to travel to have this important restorative surgery performed,” he said. With his breast reconstruction practice performing strongly and a successful private practice specialising in breast reduction, it seems the time was right for Guy to take on a General Surgical Fellow for one year’s specialist training. Dr Michael Yunaev, the first

Left: Dr Michael Yunaev and Dr Guy Hingston perform a breast reconstruction. Right: Port Macquarie Base Hospital where they are based.

Oncoplastic Fellow employed at Port Macquarie was the perfect candidate with an interest in Guy’s field. Since he took up the position early this year he’s gained regional experience in General Surgery, along with significant oncoplastic breast surgical experience. Michael trained at Sydney’s Westmead Hospital and at the end of last year completed his Fellowship in General Surgery and started looking at sub specialties in breast surgery. “It can be tricky to get the appropriate training and Guy’s employing new developments in oncoplastic breast surgery and is offering a full spectrum of options for the patient,” Michael told HealthSpeak. Since starting work with Guy,

Michael has obtained the training he wanted to benefit the patient both through plastic surgery and oncologically, mainly TRAM flap and breast implant reconstruction surgery. The TRAM flap (transverse rectus abdominus myocutaneous) is a tissue flap procedure that uses muscle, fat and skin from the abdomen to create a new breast mound after a mastectomy. Additional surgery is needed to create a nipple and areola. “I’ve learned a lot from him not just technically but also in decision making which is very important in cancer surgery. We’ve been working not just as a student and mentor but as a colleague and partner. He’s relied on me just as I’ve relied on him during surgery,” said Michael.

He’s grateful that Guy had the necessary experience and confidence to allow him to gain the necessary surgical involvement. “In surgical training it’s rare to find a surgeon who will support you from the start and get you involved hands on. Such people are difficult to find,” said Michael. He also believes having a Fellow improves the status of the regional hospital and may attract further trainees and surgeons who might wish to settle in Port Macquarie. Michael and his wife are expecting a baby soon and they will be experiencing the skills of the hospital staff first-hand. Certainly both surgeons find their work fulfilling. “A large number of women each year still lose their breast to cancer. Pretty universally the women are very grateful as it restores them anatomically and they can lead a lot more normal life – socially and with exercise – being able to wear a swimsuit or a low-neck dress,” said Guy. Guy says he’s found having Michael as a Fellow very rewarding. “I have had two junior registrars and some who’d finished their training, but having someone specialising in my sub-specialty was a breath of fresh air. “I enjoyed honing my skills and it was professionally satisfying having an ‘apprentice’. It was refreshing to work with someone in the first stages of their career.”

Plain packaged cigarettes will help save legs People at risk of debilitating lower leg ulcers will benefit from the Federal Government’s tobacco plain packaging laws that came info effect on December 1, according to the Australian Wound Management Association (AWMA), the peak body for 3,000 nurses, doctors and allied health professionals in this field. Welcoming the decision to remove some of the glamour from cigarette smoking, AWMA’s Medical Representative, Dr Stephen Yelland, said tobacco use is the single most preventable cause 20

of death and serious illness in Australia and closely linked with circulatory problems that contribute to lower leg problems. “Establishing a patient’s smoking history is a crucial part of treatment of lower leg ulcers. Patients experiencing this painful and intransigent condition tend to be elderly with a range of health issues, some related to being former smokers. In addition, there is a connection with smoking among many younger sufferers. Tobacco smoke, which includes a range of toxic chemicals, impedes

blood circulation and makes it very hard for wounds such as venous leg ulcers to heal naturally.” According to Dr Yelland, a Gold Coast GP with expertise in leg wound management, “At any time around 300,000 Australians suffer leg wounds requiring medical and nursing care. Wound care is one of the most frequently performed GP procedures and accounts for up to 80 per cent of community nursing treatments. “Yet the impact of smoking is entirely avoidable and the these efforts to reduce tobacco con-

sumption are welcomed. “It is gratifying to see that smoking rates have generally been dropping, but they remain dangerously high in certain segments of the population. “The more you smoke, the harder it becomes to quit and the greater the long-term risk to your health. Believe me, there is nothing glamorous about having weeping leg ulcers, whatever your age, so anything that could help reduce the desirability and acceptability of smoking deserves to be encouraged.” HealthSpeak

HealthSpeak is a magazine for health professionals on the north coast of NSW, Australia. 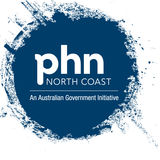