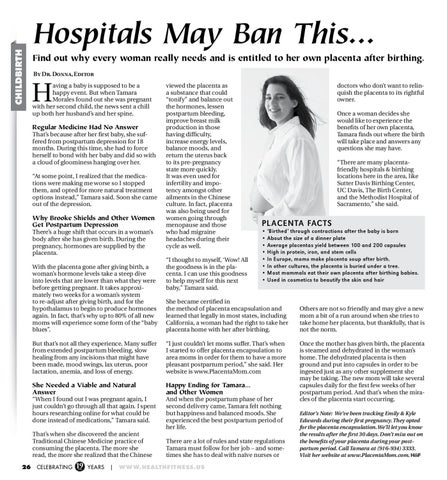 Hospitals May Ban This… Find out why every woman really needs and is entitled to her own placenta after birthing. By Dr. Donna, Editor

aving a baby is supposed to be a happy event. But when Tamara Morales found out she was pregnant with her second child, the news sent a chill up both her husband’s and her spine. Regular Medicine Had No Answer That’s because after her first baby, she suffered from postpartum depression for 18 months. During this time, she had to force herself to bond with her baby and did so with a cloud of gloominess hanging over her. “At some point, I realized that the medications were making me worse so I stopped them, and opted for more natural treatment options instead,” Tamara said. Soon she came out of the depression. Why Brooke Shields and Other Women Get Postpartum Depression There’s a huge shift that occurs in a woman’s body after she has given birth. During the pregnancy, hormones are supplied by the placenta. With the placenta gone after giving birth, a woman’s hormone levels take a steep dive into levels that are lower than what they were before getting pregnant. It takes approximately two weeks for a woman’s system to re-adjust after giving birth, and for the hypothalamus to begin to produce hormones again. In fact, that’s why up to 80% of all new moms will experience some form of the “baby blues”.

“I thought to myself, ‘Wow! All the goodness is in the placenta. I can use this goodness to help myself for this next baby,” Tamara said.

doctors who don’t want to relinquish the placenta to its rightful owner. Once a woman decides she would like to experience the benefits of her own placenta, Tamara finds out where the birth will take place and answers any questions she may have. “There are many placentafriendly hospitals &amp; birthing locations here in the area, like Sutter Davis Birthing Center, UC Davis, The Birth Center, and the Methodist Hospital of Sacramento,” she said.

• ‘Birthed’ through contractions after the baby is born • About the size of a dinner plate • Average placentas yield between 100 and 200 capsules • High in protein, iron, and stem cells • In Europe, moms make placenta soup after birth. • In other cultures, the placenta is buried under a tree. • Most mammals eat their own placenta after birthing babies. • Used in cosmetics to beautify the skin and hair

She became certified in the method of placenta encapsulation and learned that legally in most states, including California, a woman had the right to take her placenta home with her after birthing.

But that’s not all they experience. Many suffer from extended postpartum bleeding, slow healing from any incisions that might have been made, mood swings, lax uterus, poor lactation, anemia, and loss of energy.

“I just couldn’t let moms suffer. That’s when I started to offer placenta encapsulation to area moms in order for them to have a more pleasant postpartum period,” she said. Her website is www.PlacentaMom.com

She Needed a Viable and Natural Answer “When I found out I was pregnant again, I just couldn’t go through all that again. I spent hours researching online for what could be done instead of medications,” Tamara said.

Happy Ending for Tamara… and Other Women And when the postpartum phase of her second delivery came, Tamara felt nothing but happiness and balanced moods. She experienced the best postpartum period of her life.

That’s when she discovered the ancient Traditional Chinese Medicine practice of consuming the placenta. The more she read, the more she realized that the Chinese 26

viewed the placenta as a substance that could “tonify” and balance out the hormones, lessen postpartum bleeding, improve breast milk production in those having difficulty, increase energy levels, balance moods, and return the uterus back to its pre-pregnancy state more quickly. It was even used for infertility and impotency amongst other ailments in the Chinese culture. In fact, placenta was also being used for women going through menopause and those who had migraine headaches during their cycle as well.

Others are not so friendly and may give a new mom a bit of a run around when she tries to take home her placenta, but thankfully, that is not the norm. Once the mother has given birth, the placenta is steamed and dehydrated in the woman’s home. The dehydrated placenta is then ground and put into capsules in order to be ingested just as any other supplement she may be taking. The new mom will take several capsules daily for the first few weeks of her postpartum period. And that’s when the miracles of the placenta start occurring. Editor’s Note: We’ve been tracking Emily &amp; Kyle Edwards during their first pregnancy. They opted for the placenta encapsulation. We’ll let you know the results after the first 30 days. Don’t miss out on the benefits of your placenta during your postpartum period. Call Tamara at (916-934) 3333. Visit her website at www.PlacentaMom.com. H&amp;F

This is the Health and Fitness Magazine August 2011 Edition 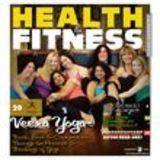